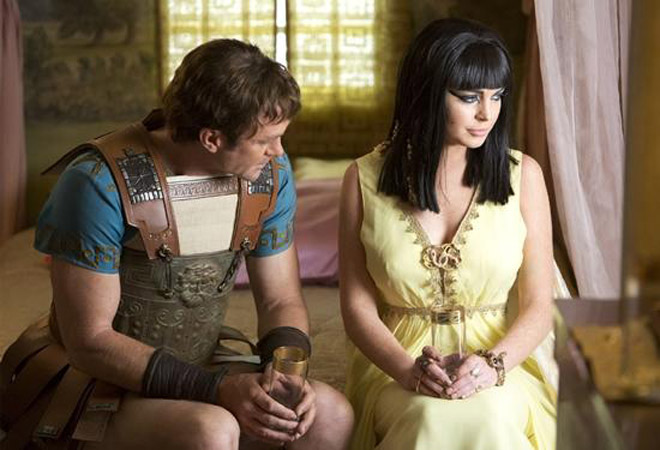 If you weren’t on Twitter last night you may not know that Lindsay Lohan “played” Elizabeth Taylor in Lifetime’s Liz & Dick (Grant Bowler played Richard Burton). Taylor had a wonderful sense of humor, so maybe she would have gotten a kick out of what was essentially a souped up Saturday Night Live skit. We have a feeling the portrayal would have sent her running to the bathroom to throw up—much like she did at the premiere of Cleopatra when she saw the final cut of the film. Liz & Dick will probably be a ratings-palooza. Here are three spots where we (everyone who watched the TV event) guffawed… loudly.

3. The Voice
C’mon, Lindsay! Act!! Taylor had a much softer voice when she turned it on, bordering on an affected English accent. Lindsay sounded more like Marianne Faithful when she was screaming, “I’m bored. I’m so bored!” or maybe like an extra from The Californians. Light applause to Bowler who at least gave Burton’s Welsh baritone a decent shot.

2. The Script
What’s with the Kardashian/Actor’s Studio bits where the duo talk about their great love affair while wearing mime costumes? This screamed comedy sketch. Remember First CityWideChange Bank? How did they make these two fascinating lives such a snooze?! By the time Burton’s brother fell down the steps (which is tragic), I actually did a spit-take with my tea.