A decade ago, launching a campaign to convince officials that it would be a good idea for the US Navy to christen a more than half-billion-dollar war-fighting vessel after a seminal gay figure was an intimidating proposition.

A decade later, “In the name of the United States of America, I christen thee United States Naval Ship Harvey Milk,” or similar words will be spoken at a San Diego shipyard Saturday, November 6 by a yet-to-be-named, champagne bottle-wielding woman, as tradition dictates.

“Naming this ship after Harvey Milk is a fitting tribute to a man who had been at the forefront of advocating for civil and human rights,” said former Secretary of the Navy Ray Mabus when he announced that the name of a new refueling vessel would honor the legacy of Milk, the assassinated San Francisco City and County supervisor.

“Of course, we had planned a large, live audience and bleachers,” the naming campaign’s chief organizer Nicole Murray Ramirez. “Now that’s been scaled back because of COVID.”

The christening and launch ceremony can be watched here on Saturday, Nov. 6 at 9 a.m. PST.

Ramirez, a longtime Southern California LGBTQ+ civil rights activist put his powers of persuasion to good use for project, “USNS Harvey Milk,” and to hear the influential drag empress recount those early days of lobbying the Navy and the Obama Administration, is to take in a compelling saga about overcoming the deepest of doubts.

“I called some of the same elected leaders who’d helped us get the U.S. Postal Service to issue a Harvey Milk stamp—I’m not going to say who they were, because—let’s just say they were less than encouraging.”

“I said, ‘Look, we’re going to launch a letter-writing campaign to get a Navy ship named for Harvey.'”

“They said, ‘You may have been successful with the stamp, but you’ll never get a Navy ship named for Harvey. It’s not going to happen.'”

But the campaign took off. Ten years passed. A couple thousand letters were written. Innumerable meetings, pitches, speeches, rallies — three presidential terms of office; not to mention two impeachments, an insurrection and an attempted coup — came and went. Now, brand new naval ship, T-AO 206, has been built and will be named, “USNS Harvey Milk.” 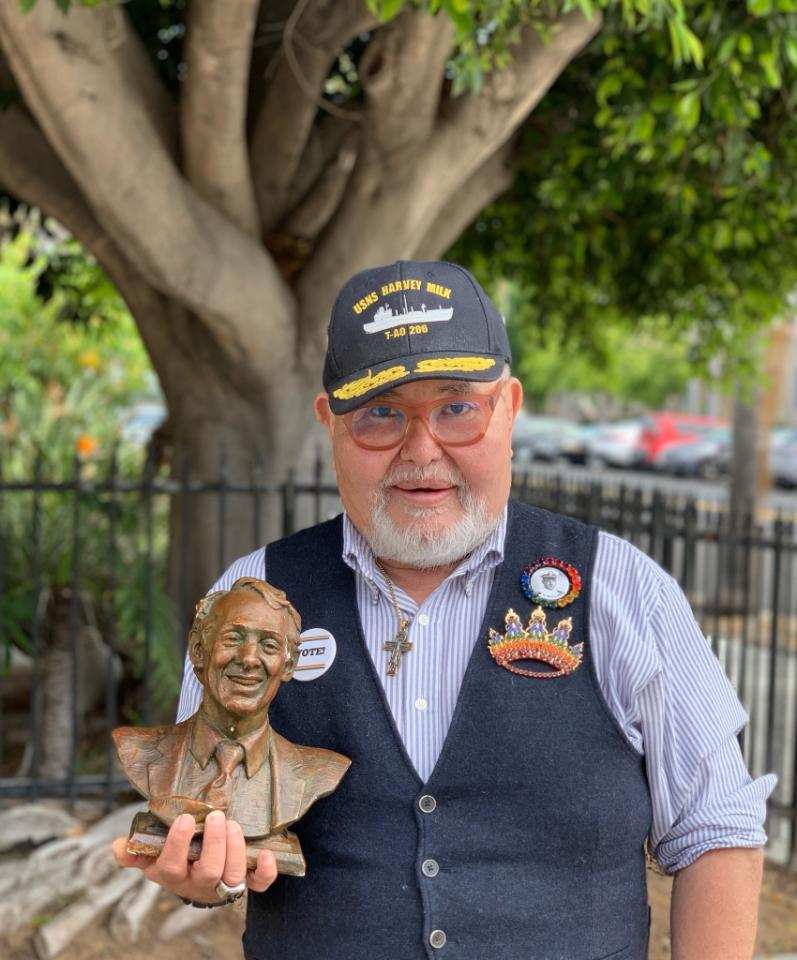 The second ship to be built among a new class of replenishment vessels, the Milk’s ceremony comes after the christening of USNS John Lewis in July.

The entire six-vessel class of ships already ordered—the Navy just requested funding for a seventh ship, with a total of 20 planned—is named for the late congressman. Rep. John Lewis (D-Georgia), who died last year. Congressman Lewis cemented his place in history as a lifelong soldier in the battle to win civil rights. His reputation as a man of great humility, courage and achievements moved two generations to serve in various capacities to promulgate equality and opportunity, while stemming racism and bigotry wherever and whenever possible.

Harvey Milk’s rousing speech delivered to attendees of the Eighth Annual Los Angeles Gay Pride Festival at DeLongpre Park in Hollywood is considered a lightening bolt that moved voter turnout to defeat the so-called “Briggs Initiative,” which would have barred gay people from teaching in public schools.

“I’m tired of the Anita Bryants of the world twisting the language of the Bible to fit their own distorted outlook!” An electrified Milk calls out. “But—BUT! I’m even more tired of the religious leaders who know better and yet remain silent!”

It’s tempting to think that admiration for the civil rights movement and generational leaders, like Truth, Lewis and Milk is universal. Recent events, not least among them the white nationalists-led January 6 assault on the US Capitol, obliterate that notion.

“T-AO 206 [USNS Harvey Milk] will, for decades to come, serve as a visible legacy of Harvey Milk’s committed service to his nation, both as a sailor and as an activist. By adorning one of our ships with his name, his example will live on in the steel of that ship and in all those who will serve aboard her,” said Mabus.

“Harvey was a lieutenant in the Navy,” Ramirez says during a recent interview with Los Angeles. “A lot people don’t know that. He was stationed for a time in San Diego, so it’s fitting that this is where the ship will be named.”

Ramirez thanks Secretary Mabus for supporting the effort.

“We couldn’t be more grateful.”

But Ramirez’s own opportunity to serve in the military turned out differently than did Milk’s.

“I come from a military family,” he said. “My father was a World War II veteran; my brother was in the Navy. I actually got drafted. As soon as I got [to the recruitment station] a purse nearly fell out of my mouth. They knew I would not be what they were looking for back in those days.”

Born Murray Ramirez, the activist is also known as, “Empress Nicole the Great, Queen Mother of the Americas” within the nonprofit social and charitable organization known as the International Imperial Court System.

The Imperial Court is a sprawling, multi-national group whose members include famous and everyday drag queens and kings, as well as myriad other civic and community leaders known for sporting opulent uniforms and ball gowns—and for doing substantive good in the world.

“Think of us as the gay Shriners,” Ramirez once said. Ramirez credits the ICS’s members for making the letter-writing campaign successful.

“I may have thought of it and got it going initially,” he said. “But without the Imperial Court and our members across the country and even in Canada, there would be no Harvey Milk ship.”

Like Milk before him, Ramirez is a big believer in the power of symbols and role models to make lasting change.

“Can you imagine what this is going to mean to the little gay kid in the Midwest who thinks he has no one like him or her to look up to?” Ramirez said.

Milk is considered to be the first out, gay man to be elected to political office in America. But he wasn’t the first to run.

“I met Harvey Milk through José [Sarria] in San Francisco,” Ramirez recalled, referring to the Imperial Court System founder and his own mentor. José Sarria was Harvey Milk’s political predecessor, running 10 years before Milk did. Sarria was a serious, albeit ultimately unsuccessful, candidate for a seat on the same body the more famous out, gay man eventually won. Many forget that Milk only won after three unsuccessful bids for office.

Ramirez has led or helped lead successful campaigns to name various spaces, landmarks and other memorializing objects in honor of Harvey Milk. They include everything from a public-park bench, to city streets—the first named for Milk, in fact, in San Diego—a postage stamp and now a US Navy ship.

Now he’s focused on one constituency.

“Christening day, the day we name the ship named for Harvey Milk, is all about the veterans,” Ramirez said. “This is about them. It’s their day.” 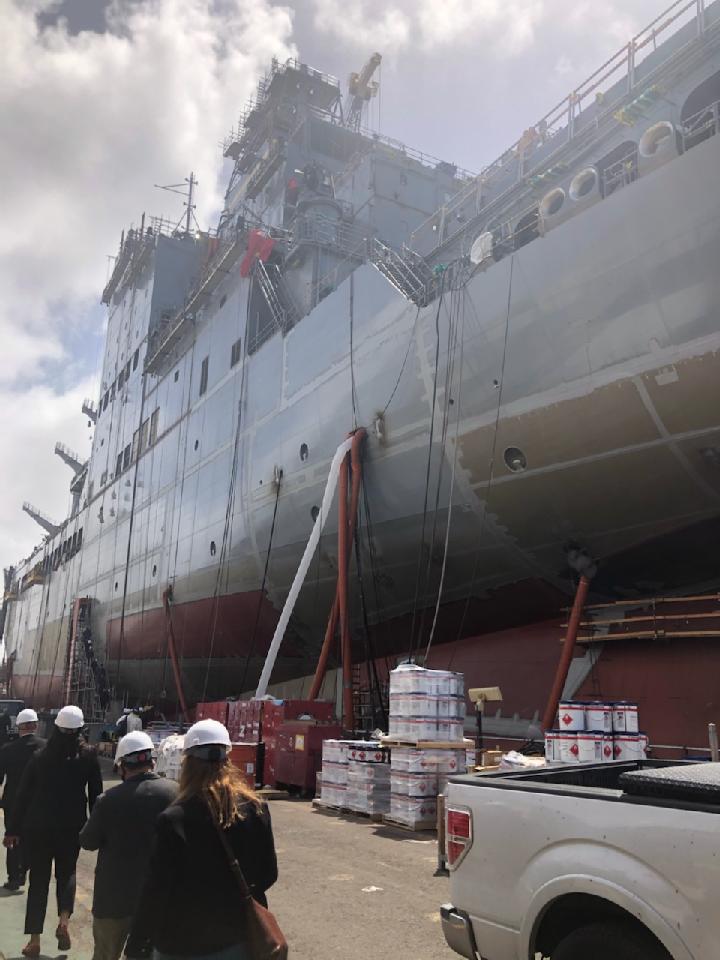