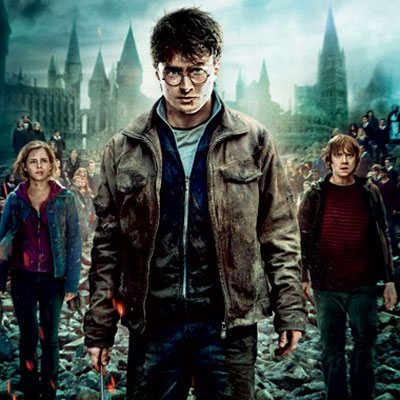 Share
Email
Facebook
Twitter
Pinterest
ReddIt
I saw an IMAX 3D screening of the last Harry Potter flick last night (it opens Friday) and I am still enchanted (yea, I know, but that’s the word for it). The film-makers have definitely saved the best for last—it is epic, and it’s a hit. IMAX is the way to see the last installment of Harry, Ron and Hermione’s grand, magical adventure, I did, however, kind of forget about the 3D aspect of it while watching. The film is the largest IMAX release to date (423 to be exact). In the screening I attended at the AMC Burbank 16 IMAX, people cried (really, the woman behind me just sobbed at one point), cheered and gave a hearty round of applause when the credits hit the screen. During one of the most pivotal moments when Harry is facing You-Know-Who, someone’s cell phone went off. Oh the scorn. The film is absorbing (boy, do I wish I’d have seen Part One again as a refresher—when did Harry pick up the Resurrection Stone, exactly?) and a constant thrill ride and Daniel Radcliffe as Harry is at the top of his game. Those who have read the books (I’m not one of them) know who survives the big battle at the end (well, the whole last film is a battle) and I was on the edge of my seat not knowing who was going to fall. If you’re into Potter, you don’t need me to tell you to see it. But you’ll be thrilled with the David Yates directed film and be thinking of it long after you’ve left the theater.