Home Fashion Murderinos Can Stay Sexy (and Not Get Murdered) in This Local Brand’s... 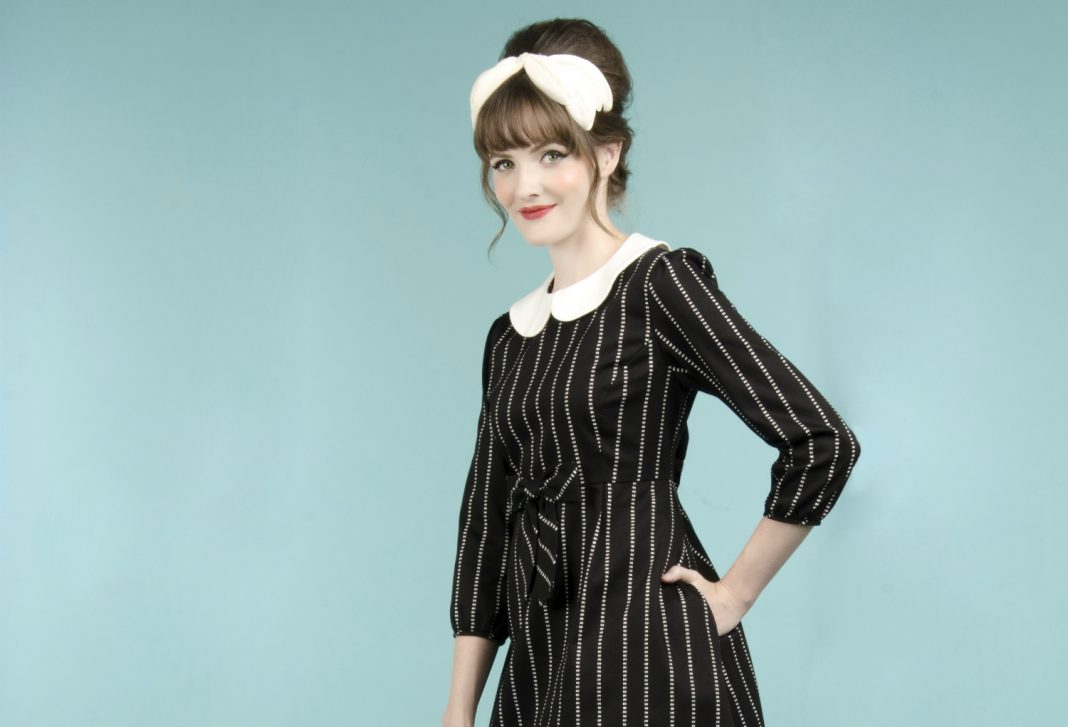 April Folan intended on making just one Hardstark dress. Like the rest of her May68 line, it recalled the 1960s, a black number with a white collar that’s more Hayley Mills than Wednesday Addams. A touch of embroidery on the collar read SSDGM, meaning “Stay Sexy, Don’t Get Murdered,” a nod to the popular podcast My Favorite Murder, whose co-host, Georgia Hardstark, was the recipient of said dress.

Folan admits to “fangirl-ing” when Hardstark wore the creation at the Orpheum for a live taping earlier this year and gave May68 a shout-out from the stage. Then came the requests for more. Folan did a limited run of 100. But, that wasn’t enough to meet the demand. A second run of 50 sold out as well, and she plans release another batch of Hardstark dresses this December. A portion of the proceeds benefit End the Backlog, an organization working for rape kit reform.

Launched in late 2015, May68 puts a modern twist on ’60s style. The Hardstark dress has pockets. Tees and sweatshirts come with graphics that look like the title cards for James Bond flicks that were never made. Peep May68’s Instagram and you’ll find pics of mid-century style icons mixed with 21st century women dressed in Folan’s fashions.

We met for the interview at the Bob Baker Marionette Theater, where the designer was overseeing a May68 photo shoot a few weeks before the launch of her Winter 2018 collection. The puppet theater, which recently announced an upcoming move from its historic home, is one of Folan’s earliest memories. “That just changed my life and it’s so ingrained in my mind,” she says. “I’ve always been a big fan of the theater and I just think it’s one of the most epic and magical places in Los Angeles.” Her model, Lola Paja, is wearing the Natacha dress, based on a friend’s old uniform from a school in France. Amidst the charming puppets, Paja looks like a grown-up version of the children’s book character Madeline.

Folan, who grew up in Whittier, developed her style in the Los Angeles club scene of the early ’00s. Beginning in her late teens, she would head out to parties where young people dressed in vintage finds and danced to a mix of ’60s rock and soul and more recent Britpop and indie tunes. “I remember being in awe,” says Folan. “These girls had fashion and confidence and they rocked and the clothes moved with them as they danced.” She’s still inspired by the style icons of the scene in the early ’00s. “I think about what those girls were wearing, what music they were listening to, how they were moving,” she says. “That all comes into play when I’m designing a collection.”

She spent years working in domestic production at various L.A.-based brands. So, when it was time to start her own line, Folan opted to keep it local. “I built relationships with some of the contractors that I’ve worked with for ten-plus years and they’ve become family to me,” she says. “So, if I’m going to start a business, it’s important for me to support all of the the other businesses that I’ve worked with for so long. It’s really kind of like, it takes a village. It’s really a group effort.”

May68 releases small runs of items and often makes use of upcycled materials. “I feel better about my pieces because I’m using stuff that otherwise would probably get thrown into a room and never touched,” Folan says, “and I’m making items out of that instead of encouraging more production of more stuff that sometimes goes untouched.”

Her personal story is in the clothing line as well. For the Winter 2017 collection, May68 released two unisex sweatshirts, GDLMX and LNDUK. The GDLMX sweatshirt is a nod to Guadalajara, where her family is from, with May 68’s logo written in a style that recalls the 1968 Mexico City Olympics and rendered in the colors of the Mexican flag. “When everybody thinks of Midcentury Modern, everybody thinks Scandinavian or whatever happened in England, those kinds of places,” says Folan, “but there was so much happening in Mexico too, especially around the time of the Olympics in ’68.” Meanwhile, the LNDUK sweatshirt, which uses Union Jack colors, is a nod to her husband, who is from the U.K.

May68 girls are everywhere, from the pages of old magazines to L.A. clubs to the designer herself. But the ultimate May68 girl may be Folan’s grandmother, a seamstress whose skill and style has been a major inspiration. “She made Halloween costumes for us,” she says. “She’s still very involved in sewing and growing up around that really influenced me and made me think about the ways clothes are made and made me want to design some of my own pieces.”

And Folan still looks to her grandmother when she works. She says, “Every time I’m in the process of developing a style, I always run it by my grandma.”

5 Reasons March Is Going to Be a Really Good Month on L.A. Stages

Behind the Scenes: Drunk History With Alie & Georgia