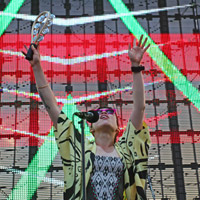 The Hard Summer Festival, an event not for the faint hearted or those with a history of seizures, concluded the weekend before last after two bass thumping days. Despite the medical cautions, the festival was relatively tame compared to movies like GO and Party Monster or even the West Hollywood gay pride parade. Where was the glitter, the grandiosity, the reckless abandon to match the fantastic performances taking place on four stages? On the main stage, Little Dragon, Miike Snow, and Squarepusher were staggering enough to blow even the most sober of minds, while the Red Bull Discotheque (read: tent) provided cover for a two night “micro rave.” Between sets, we caught up with several of the festival’s performers who gave us the details on their favorite TV shows, their musical ambitions, and the strangest places they’ve heard their own music.

[Photograph of Boys Noize by Michael Meier. All other photographs by Melanie Rieders]