Home Music How One Woman Is Changing the Culture–But Not the DNA–of Local Dance... 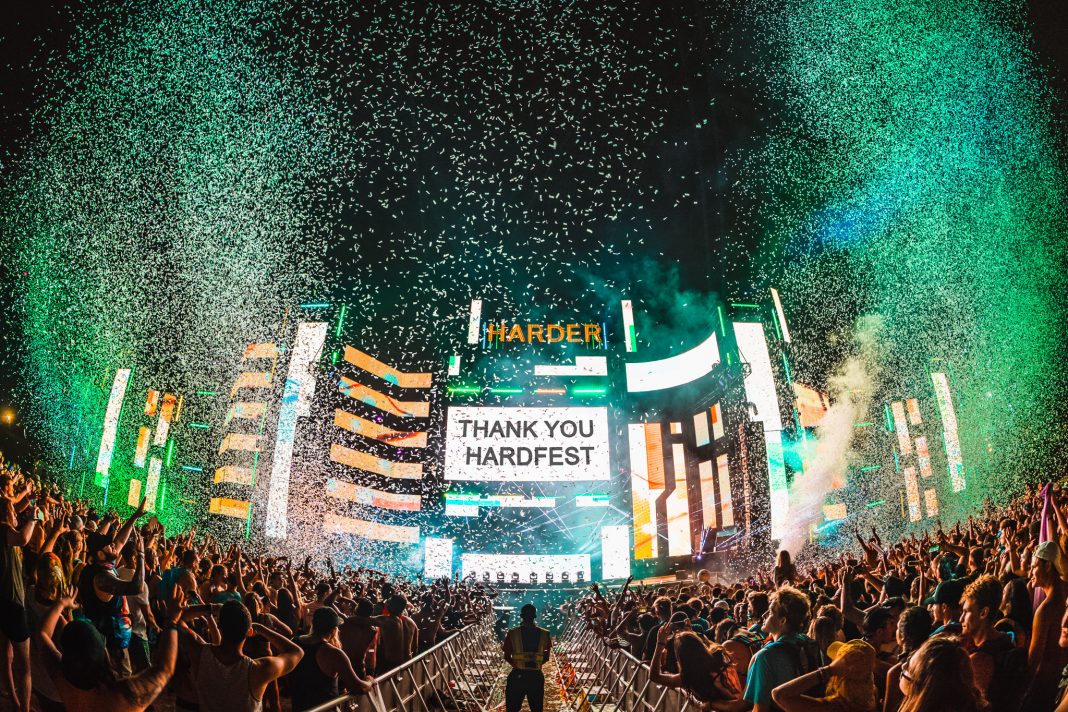 Hard Summer 2017 | Photograph by Oh Dag Yo, courtesy of HARD

The first HARD music festival was a New Years Eve party on December 31, 2007 in downtown L.A. The event was an almost instant hit, and the first summer festival was staged just seven months later. The promoters had tapped into surging EDM movement of the time, and brand grew into a behemoth with multiple annual festivals around L.A., other events across the country, programming on cruise ships, and presenting international tours.

As the popularity of HARD grew, the name became internationally known in dance music circles, and the festivals drew larger and larger crowds with each year, hopping from the Shrine, to the Forum, to Los Angeles State Historic Park, to, in 2016, the Auto Club Speedway in Fontana, where HARD fest drew an estimated 146,000 attendees.

While the crowds and influence of the festival continued to grow, it was also marked by tragedy. Two audience member deaths were reported at the 2015 festival, and another three at the 2016 festival, all associated with drug use. A lawsuit filed by the father of one of the individuals who died contended that the festival organizers had not done enough to create a safe environment for festival-goers.

Then, just as the festival attempted to recover from the negative attention and go into the 2017 festival season, founder Gary Richards found himself forced to apologize for a promotional video he released which some found to be disrespectful to women. Attendance for the 2017 festival took a hit, and Richards ultimately left the company entirely.

Now, going into this year, HARD fest is making something of a fresh start. Leading the project is Meagan Deschenes, who had been working with the festival in various capacities almost since its inception. While the festival has been owned for the last five years by Insomniac, HARD is now able to more fully take advantage of Insomniac’s experience in operations, production, and logistics, with a goal of creating a safer and more positive experience for attendees.

We spoke with Deschenes as she prepares for this year’s festival, coming up on August 4 and 5, about what goes into putting on a festival–and why she felt confident taking the reins of a brand that carries a bit of baggage.

How did you get started working in concerts and music festivals?

It started when I was 16 years old. I used to throw punk rock shows with my friends at our local legion halls in Massachusetts. From there I went on a Warped Tour with my friend’s band, working as a tour manager–though I didn’t really realize that’s what you called what I was doing, I kind of thought I was just having a good time. Doing that, I came to California for the first time and I saw it and just knew I needed to live here. So after I graduated college, I moved to L.A. and started working as a promoter for the local electronic club scene. That kind of brought me all the way to where I am now.

You joined HARD in 2008, which was very early on for the company. What was the vision for the brand and the festival at that time?

The fundamental DNA was the same then as it is now; it’s about the music. That’s really what HARD is all about. Being a part of Insomniac now, we’re also focusing on the fans and making sure they’re comfortable at our shows, along with the music.

Back in the day, we started HARD with such a small about of staff. I ended up doing all different kinds of roles. You could call me a project manager, a content creator, a janitor, a babysitter… And that’s still sort of my approach. If something needs to be done, I still do it. No job too big, no job too small.

How has the scope and scale of HARD grown over the course of that decade?

HARD always grows, year after year. This year is going to be the biggest HARD Summer we’ve ever had in terms of attendance. The thing that’s important is that while we’re getting bigger and bigger, we’re also continuing to evolve. We’re changing as the industry is changing, as the music is changing. Now, with Insomniac helping with production and everything, we’re going to keep growing.

“The thing that’s important is that while we’re getting bigger and bigger, we’re also continuing to evolve. We’re changing as the industry is changing, as the music is changing.”

Can you talk a bit about the new leadership role you’ve stepped into for 2018?

My current role has me kind of overseeing the whole thing. Everything from sitting down with the talent buyers to talk about who we’re going to book, to working on creating content, doing the marketing, checking over designs… just everything. As I do all of that, I’m really thinking all the time about how we can improve every aspect, particularly since I’ve been with the brand pretty much since the beginning, and I see where we are now.

You’re taking on this festival at an interesting time, after a couple of really difficult years. Did that give you any pause or present a challenge in terms of how you wanted to lead the organization forward?

No, I didn’t really have that hesitation. I’ve been with the brand for so long and I’m really passionate about what we do, about the music, the experience. That’s why I’m still here. I’ve put in a lot of blood, sweat, and tears, and I knew this was worth continuing. And I knew what I could do, especially with the backing of Insomniac and everybody here. My feeling was, “Let’s go forward! Let’s do this!”

“I’m really passionate about what we do, about the music, the experience. That’s why I’m still here. I’ve put in a lot of blood, sweat, and tears, and I knew this was worth continuing.”

But under me and the team here now, we really want to make it a really great experience for the fans. We’re doing better production than ever before. We’re booking lineups that are all over the board, with more different genres of music. And we’re really listening to what the fans want and staying in touch with that, because, ultimately, we do this for them.

I’m always getting feedback from our fans. We send surveys, we interact with them a lot on social media. A lot of them actually call my phone and I talk to them. My phone number got leaked on Reddit, and I answer, and I talk to them. We have a whole customer service team now, of course, and they handle some things–but for a long time, it was me.

Do you think there’s something particularly significant about being a woman in this role, particularly in dance music, which hasn’t always been the most hospitable for women?

I’m proud to be female and to be in this position. I would be happy if my story can inspire other females. I never think of my gender when I think about where I am. I think about my work ethic, my passion. I show up every day and work, sleep a little bit, then keep going.

How does the lineup of the festival get selected?

It starts when we all sit down–we have our talent buyer Chase Fielder, Pasquale Rotella, the CEO of Insomniac, is there also–and we start with just a big conversation about music we’re currently listening to, ideas we’ve seen work or not work before. We’re looking for the artists that make us say, “Wow, this person is doing something really awesome, I want everybody to see this.” Those are the artists we want to give this platform and share what they’re doing with the fans. Everyone we book, it’s like we’re saying “You’ve got to check this person out.” We’re really looking for what we feel strongly about and what we know our fans are going to think is great.

Putting the festival together is 100% about music discovery. There is so much music out there. Especially when you think of everything that comes out on the internet; it used to be you would get an actual record in the mail or maybe a thumb drive. Now it’s just this endless search on SoundCloud. And we’re on every platform, trying to find new music. When we find something we think is amazing, we’re going to use our platform to help expose them. And, half the time, it’s our fans showing us new music; we see the things they share on social media or the comments they leave on the internet, and when we see people are getting excited about something, we pay attention.

Are there any artists on this year’s bill that you’re especially excited about?

Yeah! Rico Nasty and Saweetie are these two hip-hop artists, female hip-hop artists, that are really doing cool things right now. And we do have some of our usual DJs who play all of our shows, but this time we have them doing special back-to-back sets, like Diplo and Dillon Francis. Those two are going to be putting on a really great show that I’m excited for everyone to see. We have this guy Bejo, who lives in Spain and raps in Spanish, and it’s really, really cool. There’s cool stuff all over the board.

“It’s been a lot of time, a lot of effort, a lot of drives out to Fontana, but it’s worth it. I think all the work we put into it is really going to show in the experience we’re able to offer to the fans.”

And in terms of guest experience, are there any upgrades to the safety and comfort of the festival that fans will notice?

Definitely. We’re really happy because we’ve been at this venue before, so we’ve been able to learn from that experience, and we’ve really listened to all the fan feedback. We’ve focused a lot on fixing any issues we may have had, and we’ve really worked out the organization and logistics of things like entrances, exits, shade, water. And we’ve upgraded the overall comfort level and production value that goes into this. It’s been a lot of time, a lot of effort, a lot of drives out to Fontana, but it’s worth it. I think all the work we put into it is really going to show in the experience we’re able to offer to the fans.

RELATED: Your Complete Guide to Music Festivals in 2018