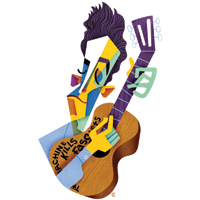 This year marks the centennial of Woody Guthrie’s birth, and L.A. is commemorating him like a native son. Granted, the singer-songwriter was from Oklahoma, and the flat, farmer’s cadence never left his voice, but he did drift toward us with the Dust Bowl refugees of the Depression and settled in Echo Park when it was a beacon of radical politics. L.A. made him a radio sensation, and California served as muse when he reached his creative zenith with alternative national anthems written and sung for the poor, the disenfranchised, and the dispossessed. Indeed, the Guthrie songbook—with its foreclosed home owners, exploited and deported immigrants, and masses of the unemployed—could provide the definitive soundtrack for today’s California. To celebrate, Arlo Guthrie will do his dad’s memory proud onstage at the Grammy Museum; USC will host “Woody Guthrie’s Los Angeles,” a scholarly exploration of the singer’s cultural impact; and a concert at Club Nokia will feature Jackson Browne, Crosby-Nash, Dawes, and Tom Morello. If Woody Guthrie were around today, he’d have plenty to write about.