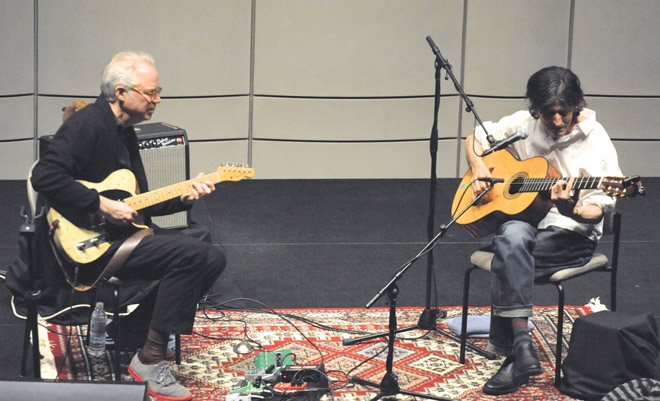 Photograph by Bonnie Perkinson/Courtesy of the Skirball Cultural Center

Cotsen Auditorium at the Skirball Cultural Center is an airy, beige and grey building with a stunning cone-shaped ceiling that looks like the belly of a steampunk mothership. On Sunday night the venue’s most spectacular element was the auditory give and take between the near-terrifying silencio of a grand concert hall and the intricate guitar interplay of Bill Frisell and Vinicius Cantuária.

After warmly embracing, the New Yorker and the Brazilian sat down for a 16-song set that focused on their 2010 collaboration Lágrimas Mexicanas. They barely spoke to the audience or each other — Frisell doesn’t speak a lick of Portuguese and has admitted he only “vaguely” knows the content of Cantuária’s lyrics, even joking to the audience, “I have no stories to tell, but you should hear stuff he talks about” — but their interplay demonstrated that the language of music is as immutable as the language of amor.

The music rested on a contradictory premise: the set rhythms of Brazilian bossa nova and tropicalia paired with improvisation rooted in the looseness of yanquí jazz. Despite being equally billed, the songs from Lágrimas Mexicanas put Cantuária at center stage while the affably deferential Frisell busied himself as a quasi-sideman. He never stepped on his partner’s mournful, hushed vocals (sort of a cross between Joao Gilberto and Chet Baker) and percussive acoustic-guitar lines. Songs like “El Camino,” “La Curva,” and “Lágrimas de Amour” were rendered so hushed and delicate they almost hid in the air. Cantuária occasionally hit aggressive, dissonant notes with a half-closed fist that broke the spell so completely that several audience members in the front rows visibly flinched. (The guy was in a rock band.)

Despite his impeccable choice of material and collaborators, Frisell has been criticized for the chilly precision of his guitar tone. In a live setting, however, his notes were like tiny, symmetrical dewdrops falling off a wet twig: clean, warm, and inviting with traces of jazz, country, and Malian folk in their DNA.

For the closer, “Mi Declaración,” Cantuária took to slamming and smacking the hollow body of his guitar while Frisell lurched forward through a jungle of loops and delays in a bass twang reminiscent of Johnny Cash’s guitarist Bob Wootton. Just as much of a showstopper in concert at it is on the record, the song was a magical realist fresco where Frisell and Cantuária arguably came closest to melding their different approaches into an exciting millennial hybrid.