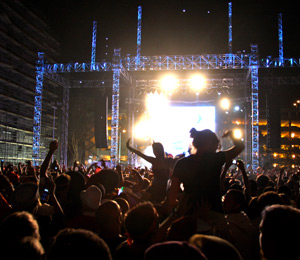 Like we told you, L.A. nightlife got into the Halloween spirit this year. Herewith, dispatches from around town…

HARD’s annual Haunted Mansion returned to the Shrine this year—and sold out—once again. It had been eight years since my first rave, and a few years since my last. Sure, I go to Vanguard or the Avalon from time to time, depending on who’s spinning, but an all ages electronic dance party is a completely different beast, and after hearing good things from friends and seeing that A-Trak, The Bloody Beetroots, Danger, Destructo, 2MANYDJS, and Deadmau5 would be playing, I was curious and made plans to go.

The audience was charged, and in costume—where else would you find a hipster wearing a plaid top and blue tutu sucking on a pacifier—but for me, the music gave the event meaning. Danger, straight from the French electro scene, Montreal-born turntablist A-Trak, and the Bloody Beetroots kept fans on their feet before Deadmau5, the most anticipated act of the night, closed the party with a more than satisfying set.

Kenny Chao, back from an extended sabbatical from the scene, told me he had stopped attending raves because more and more kids think of raves as “a weekend party” these days. Like me, the “sick line up” got him out of hiding. Like many, I’ll be keeping an eye out for HARD NYE.

One of the most ingenious turntablists of our time, masked strangers, and a backdrop straight out of Dracula: KCRW’s Halloween Masquerade dance party at the Legendary Park Plaza had it all. Resident DJs Jason Bentley, Garth Trinidad, and Raul Campos flooded four rooms of the gothic hotel with a special set by DJ Shadow, who flew in from London to headline the event and spun old school hip-hop from Gucci Crew II and recent hits from MGMT, Beck and Kanye West while introducing new music from Bay Area artists Traxamillion. “KCRW and Jason Bentley have supported me throughout the years,” he said. Having started out as a disc jockey himself at UC Davis, Shadow is a long-time supporter of independent artists and the radio station.

He was in good company: Indie bands Little Dragon, Seawolf and Edward Sharpe and the Magnetic Zeroes performed live—in costume—and guests dressed up as characters from UP, Tapatio and Sriracha condiments, glowing sea creatures, Octomom, and more. Penguins paddled through the intimate nooks and crannies of the Plaza and sipped cocktails with the Watchmen while the Kogi BBQ, Border Grill, Sprinkles Cupcakes and The Grilled Cheese food trucks served food all night long.

Turns out the station that introduces new artists to my playlist throws a killer dance party, too.

SAT: HALLOWEEN HOEDOWN AT THE HAMMER

All I could think about this Halloween was how I wish I could go back to being a kid. I longed for the excitement of trick-or-treating and dressing up as my favorite Disney character. When I walked to into the Hammer Museum’s Halloween Hoedown (dressed as Belle from Beauty and the Beast) on Saturday evening,

I did not expect my wish to be answered, and yet, there I was alongside dozens of others gluing together purple popsicle sticks to make a haunted house, stringing together beads to spell out my name, and enjoying my fill of candy-flavored (adult) d