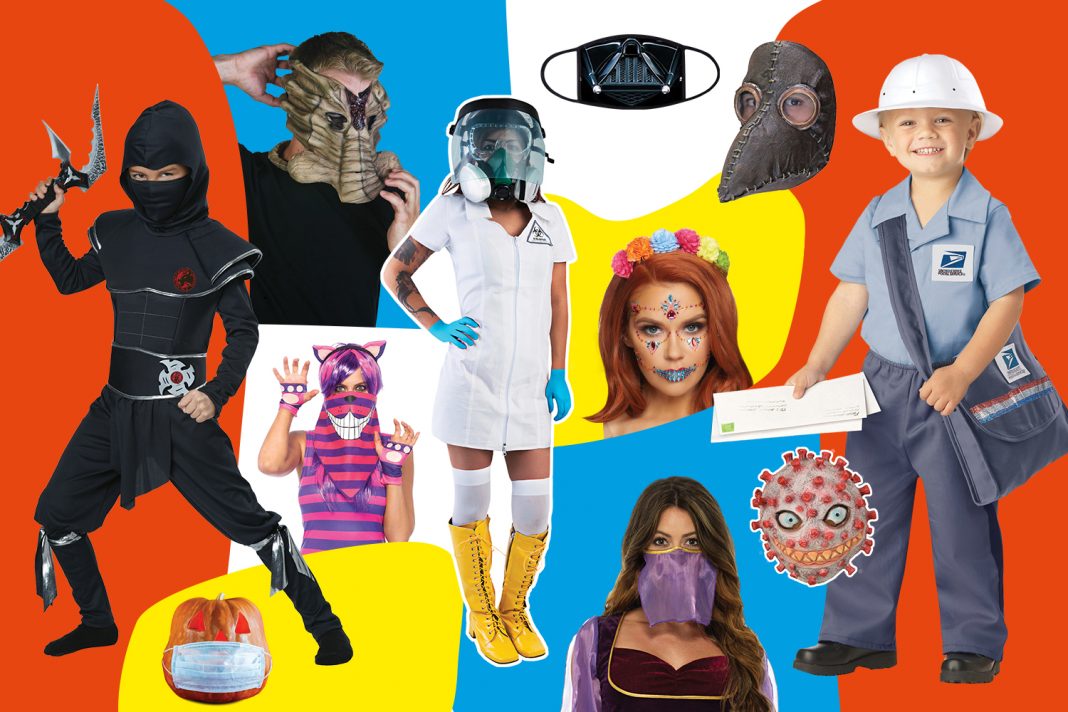 Just because there are far fewer places to go this Halloween doesn’t mean Angelenos won’t get all dressed up on October 31.

In America, the Halloween industry is valued at $9 billion annually, and the Los Angeles area accounts for more of that massive amount of money than any other American city, according to a survey published in USA Today. In fact, L.A. is home to more costume stores, candy shops, and haunted houses than anywhere else on the continent. And while the spooky business is seeing a big downturn at the moment, local shops say the party will, and should, go on.

“You want to maintain some sense of normalcy with digital pumpkin-carving contests where you can dress up and drink wine,” says Lisa Griffin, director of marketing and communications at Leg Avenue. The City of Industry-based company practically invented the sexy Halloween costume back in the ’90s, with sultry Snow White and skin-tight Catwoman getups. They’ve had to pivot this season, marketing face masks and jewels originally created for canceled events like Coachella and Burning Man as Halloween items. Griffin says that online holiday celebrations are important for staying sane in these uncertain times. “Zoom helps make you feel like your world is still in order,” she says.

Meanwhile, California Costumes is hoping that October will be a bright spot in what’s been a dismal year for the business. Sales for the company, headquartered in Boyle Heights, are down 50 percent for 2020, and the manufacturer and wholesaler has sold only 45,000 of its top costume—a custom kid’s ninja outfit—compared to the 300,000 sold in 2013.

“This is the first time we’ve been faced with losses and layoffs,” says California Costume director of design Chris Guzman. “Everybody’s holding their breath and hoping we all survive. But we will rise from the Halloween ashes.”

And it’s not just the pandemic that costume-makers have to worry about these days: in the wake of the George Floyd protests and a poisonous political season, even the most innocuous-seeming costumes are potential minefields.

“There are so many things happening in the world this year with the pandemic and social justice,” says Alicia French of Alicia’s Costumes, a rental and custom costume shop in Covina. “There’s a lot of emotions. I got rid of all my American Indian headdresses since people want to stay away from ethnic costumes. We’re not going to blackface anybody. We’re going to help people achieve their look, but there are certain lines we’re not going to cross.”

French is focusing on ensembles with a face mask that is an organic part of the costume: think cowboys with bandanas and genies with veils. She has even designed a new collection of handmade face coverings based on The Wizard of Oz, where the story is incorporated into the mask—a straw border for the Scarecrow and a tiny tail for the Cowardly Lion.

Shon LeBlanc of Costume House in North Hollywood believes another big cat will be popular this year. “I think people will do the Tiger King cast,” he says. “They’re such characters.” And despite their potential to offend, he imagines some political costumes will also be quite popular. “I have a feeling there’s going to be a lot of interesting Trump things,” he says. “I can see Melania with a gold-coin bikini or wrapped in a big Visa.” And, of course, there will be sexy costumes inspired by healthcare workers, but with plenty of skin on display. “We have a see-through doctor’s smock by Bob Mackie. It’s a sheer crinoline with a little bit of a shimmer,” LeBlanc says. “Halloween is the one day that you can be as trashy as you wanna be.”

“When you put on a costume, you’re allowed to leave your worries behind and you’re somebody else,” says France. “It helps release stress. We all need that. The kids need that.”