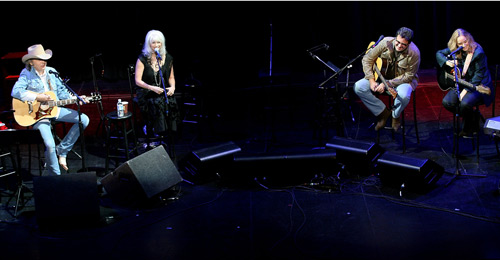 By the time Chris Isaak introduced Vince Gill, Emmylou Harris, Dwight Yoakam, and Melissa Etheridge to the 300-person audience at the Country Music Hall of Fame and Museum’s All For The Hall benefit dinner and concert at Club Nokia Thursday night, I was catching my second wind. It was a long week, sure, but knowing what I was about to see and hear—a classic guitar pull with some of American Music’s greatest singer-songwriters—had me sitting up straight.

For over two hours, Vince, Emmylou, Dwight, and Melissa shared the stage, taking turns “moving west” selecting songs to sing—some from their own canons and some from songwriters they admire: Emmylou sang “Sin City,” and “Strong Hand;” Dwight sang “Wheels” and “Buenos Noches From a Lonely Room;” Melissa sang “You Can Sleep While I Drive” and “Me and Bobby McGee” (c’mon, someone had to); and Vince sang “If I Needed You.”  Surprise guest Kara DioGuardi showed up randomly and sang “Lost.”  The songs were introduced with stories, not titles.

The singing and storytelling was incredible—Emmylou’s voice as strangely familiar and piercing as when I first heard her sing on Bob Dylan’s “Mozambique”—but watching the four interact on stage, seeing how fundamentally different they are as people and performers, that was the real show. Melissa played along with almost every song, tapping her foot against her stool to the tunes she knew and straining to see Vince’s hands play the ones she didn’t. Vince was comfortable, just completely at ease, and Dwight, looking great in the tightest jeans I’ve seen since the last time I saw him perform, was alternately charmed and excitable. He learned back so far on his chair it eventually cracked, and he shot forward to his mic to share rambling jokes throughout the night.

Physically to the left but emotionally at the center of it all was Emmylou, whose influence pulled the group together. Dressed in a gypsy black dress and beautiful as ever, she accepted a steady stream of praise coolly (“It’s my job”) but with grace.

By the time Dwight cracked a second chair (stage hands finally brought him a stool), Melissa was worrying about having to get up to “drive carpool in the morning,” and I was fading—fast. I stood to go but lingered in the aisle, taking it all in one last time. The audience now half-empty, the room felt more intimate and the song rotation more casual than before.

Guitar pulls are said to have started in Johnny Cash’s living room in Tennessee, when musicians like Kris Kristofferson and Joni Mitchell got together to perform new material for one another. I don’t know if it’s true, but I’d like to think that Vince, Emmylou, Dwight, and Melissa ended up alone up on that stage, that they just kept moving west until they were singing only for each other—and that somebody was recording.