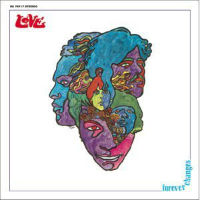 The Backstory
Arthur Taylor Lee was “the undisputed prince of the Sunset Strip in the 1960s,” according to his biographer John Einarson. He was a dashing mulatto alpha dog who sported fringed buckskin jackets, silk scarves, triangular sunglasses, and cowboy boots—and he did it before anyone had heard of Jim Morrison or Jimi Hendrix. His band, Love, was a local idol after it played residencies at clubs like Bido Lito’s, the Hullabaloo, and the Whisky A Go Go. The band received fans, groupies, and druggies aplenty in the Castle, a communal mansion on Commonwealth Road in Los Feliz that had once belonged to Bela Lugosi. But underneath the groovy threads and flower-power name lay darker paradoxes.

“Arthur was more of a punk than a hippie,” recalled David Anderle, an A&R scout for the band’s label Elektra Records, in the book Waiting for the Sun. “There was almost a gangster thing going on there, rule by intimidation.” As for his biracial band, its name, in the words of one ex-member, “should have been called Hate.” Future Manson murderer Bobby Beausoleil was one of its early guitarists. Love’s first two albums carried the dark, aggressive edge of proto-punk; Rolling Stone called it “like strange, sloppy Byrds.” Love thought nothing of following a gritty garage-rock standard like “Hey Joe” with a cover of Burt Bacharach’s “My Little Red Book.” “They were pretty ‘out there,’,” recalled Neil Young to writer Jimmy McDonough. “They were just bad enough and fucked up enough to make fun of—but they were so good, too.”

Love’s internal strife, mainly a battle of wills between Lee and his two guitarists, golden-blonde surfer-boi Bryan MacLean and Johnny Mathis lookalike Johnny Echols, were already the stuff of legend. Such tensions haunted the sessions for their next album, recorded from June to September of 1967. Though it was conceived as a double album, Elektra’s budget allowed no time for the rest of the band to learn the complex song arrangements. (Added drummer Michael Stuart: “We got high too much.”) Lee retaliated by bringing in L.A. session pros to complete the first two tracks. It was a productive attitude adjustment: The other band members dutifully rehearsed their parts and returned to the studio that August, where they completed the final nine tracks in three days at a bargain-basement cost of $2,257.

Why You Should Listen
Forever Changes may have been born of internal dissent, but it plays like a fully flowing, organic whole. It encompasses a stunning and esoteric breadth of musical influences, from flamenco, jazz, and lounge-pop to acid rock, folk, and classical (the melody of MacLean’s “Old Man” was inspired by Prokofiev). Although it was Lee’s maverick vision that held it all together, it was not his alone.

Both Echols and Stuart had jazz backgrounds—Echols, who attended Dorsey High School with Lee, grew up next to saxophonist Ornette Coleman in the West Adams district—and brought a loose, behind-the-beat feel to the songs. MacLean brought the influence of classical music, Broadway show tunes, and Hollywood pop. Bassist Ken Forssi played in an early lineup of the Safaris and brought with him the driving thump of California surf rock. Producer Bruce Botnick and arranger David Angel, a jazz saxophonist with classical training, were responsible for the lush flumes of orchestration that connected the disparate material. Elektra Records head Jac Holtzman suggested using more acoustic guitars, which gives Forever Changes its soft-focus, sun-drunk quality.

The result is a masterpiece that remains eerily unmoored from its time even as it has outlasted the legions of forgettable psychedelic bands formed in the wake of the Beatles’ Sgt. Pepper.

Local Color
Like R. Crumb’s early art or the opening credit sequence of HBO’s Silicon Valley, Forever Changes is a time-lapse animated parade of the Sunset Strip during its 1960s transformation from love beads to heroin needles. Like one of his antecedents, L.A. author Chester Himes, Lee was equal parts literate social observer and hardened street hustler, a man who reveled in the widescreen countercultural processionals of the ’60s while at the same time becoming more paranoid and suspicious about it all. As his band became more successful and the drugs started taking hold, Lee grew hyper-sensitive and nearly agoraphobic.

After he went to check on his mother while parts of his childhood neighborhood burned during the 1965 Watts riots, Lee became one of the first Sunset Strip musicians to relocate to Laurel Canyon. From this hermetic vantage point Lee sank into chemical abuse and mental isolation. His brilliance lay in his ability to couch his disquiet in allusive lyrics and bizarre wordplay. On the macabre “The Red Telephone,” for example, Lee sings about “sitting on a hillside watching all the people die” and recites a twisted nursery rhyme worthy of Roald Dahl: “They’re locking him up today/They’re throwing away the key/I wonder who it’ll be tomorrow/You or me?”

The Aftermath
Forever Changes only reached #154 on the Billboard album chart, and its first single, “Alone Again Or,” was similarly ignored—except for in Los Angeles and Great Britain. Dismayed at the reception Lee reportedly upped his drug intake, and the band broke up soon after.

Lee would spend the next two decades in chronic career confusion, releasing bizarre hodgepodge-solo albums on tiny labels and periodically reviving Love before dissolving it again—he even fired one lineup live onstage in San Francisco—and distancing himself from Forever Changes. (When audiences would call out requests from the album, Lee would respond: “I don’t play that shit anymore.”) In the ’90s, Lee did five and a half years at Pleasant Valley State Penitentiary in Coalinga, California on a “Three Strikes” charge of weapons possession.

After his release in 2001, he embarked on a tour performing Forever Changes in its entirety backed by horns, strings, and Silver Lake popsters Baby Lemonade. He found that the majority of his audiences were young music fans who weren’t even born when the album was released. Lee died in 2006 of leukemia.

Signature Tracks
“Alone Again Or” – Anchored by Latin-flavored, poignant acoustic guitar and a mariachi-pop trumpet solo, this is one of the late singer and songwriter Bryan MacLean’s two contributions to the album.

“Andmoreagain” – Arguably Lee’s finest vocal performance the song displays his debt to pop singers like Mathis and Tom Jones. It also name checks a homeless man shuffling around on the street under Lee’s window.

“You Set the Scene” – The seven-minute epic is actually a mash-up of three separate songs, all held together by Ken Forssi’s Motown-mutation bass and building to a verdant pocket-symphony coda.