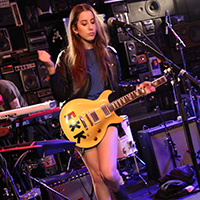 Some of Este, Danielle, and Alana Haim’s favorite memories of growing up revolve around cruising the San Fernando Valley while listening to KROQ and dreaming of one day being on the other end of the speakers. On Wednesday, it finally happened as their grown-up band, Haim, played an intimate but still raucous live session at the Red Bull Sound Space at KROQ, a renovated corner of the station once occupied by cubicles. They played a six-song set for a small audience of 150 fans, friends, and family members; in case you weren’t among them, you can watch the show, which includes a Q&A with the band, but only for a limited time.

“I’ve always wanted to give you a little love pat,” Este joked to the host, radio personality Stryker. “It’s been my Christmas wish since I was about 12 years old and heard you play ‘Pretty Fly for a White Guy’ on KROQ. So thank you for being here to witness that, everybody.”

Before their set, the Haim sisters fielded questions from fans including, to their obvious delight, Mark Hoppus of Blink-182 who asked via Twitter what their favorite Blink-182 song is. “Funny story: At my fifth grade talent show, I played ‘Aliens Exist’ in a trio with a drummer and a bassist, and I was the guitarist,” Danielle said. “And we won! So that’s probably my favorite Blink-182 song.”

The trio shared stories about growing up with musically supportive parents, getting the obligatory “You should go get a job or go to college” talk when they each turned 18, and smuggling food from Este when she worked as a restaurant hostess while attending UCLA. “It’s hard to put a four-cheese pasta under your jacket when you’re going to the movies, but we tried,” Alana said. “Sorry, Cheesecake Factory.”

HAIM played:
Falling
The Wire
Honey & I
Don’t Save Me
Forever
Let Me Go

Haim have been nominated for six NME Awards and a Brit Award. Catch them on both Fridays of Coachella 2014, headlined by a reunited OutKast.