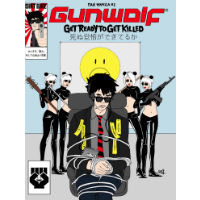 What happens when you want to compose awesome synthesizer music in your lair but you’re employed as a hitman for an evil corporation? “I guess you could say Gunwolf is a metaphor for the creative process,” writer and filmmaker Nick Ebeling laughs. He’s referring to his new multimedia project Gunwolf. Sure, it’s a traditional manga comic book but it also comes with a sweet soundtrack featuring contributions by Stereo Total, The Suzan, and The Zoobombs. The comic book, which Ebeling cowrote with A.P. Menzies, is named for its hero, a corporate hitman who lives in a violent dystopian future (is there any other kind?) but still has a penchant for synth rock.

“Gunwolf is a total antihero,” Ebeling says. “Everyone involved with this project can relate to that in some way or another. Sometimes, walking around Orange County or even Los Angeles, I feel like Gunwolf.”

Orange County plays a major role in Gunwolf, available now from Dirt Bike Press. The story begins in Japan when the Hirohito Corporation sends out its best enforcer to take care of business in Southern California. Childhood visits to Disneyland and Knott’s Berry Farm formed the seed of Ebeling’s interest in what he calls “the nebulous dark curtain of the OC. I was fascinated with the weirdness of that region,” he says. “Kids in the OC always seemed bigger than us, like they were genetically engineered or something.”

Ebeling met OC native Menzies around 2001, while attending Art Center College of Design in Pasadena. They share a love of New Wave music and ’80s pop culture. “We met in a parking lot,” he says. “He was smoking a bong and listening to the Clash and I pretty much just said I wanted to be friends with him.”

“Around the same time I started getting into these weird Japanese cyberpunk and yakuza movies from the ’60s and ’70s,” Ebeling says. “They were wild. I liked so many American movies of that type—these old crime movies, most of them starring Clint Eastwood—so I really liked the way the Japanese were handling American genres.” Inspired by the aesthetic of these films, Ebeling and Menzies worked on Gunwolf over the course of the next ten years. “We thought, wouldn’t it be interesting to do something in the vein of those movies, but put the antihero in Orange County instead of Tokyo?”

Gunwolf was conceived as a film, but the writers decided on the comic book format as a way to stay within their modest budget. Renowned movie poster illustrator Akiko Stehrenberger, another one of Ebeling and Menzies’s friends from their college days, joined the project and created Gunwolf’s black and white illustrations.

While readers are flipping through the comic book, they can listen to the soundtrack, which is available as a digital download, a cassette tape, or a record. The impressive picture disc vinyl edition of the soundtrack features a frame from the comic; Gunwolf himself strapped to a chair with enemies the Panda Women lurking in the background. The idea to score Gunwolf was inspired by Ebeling’s love for film soundtracks. Electronic musician Coco Morier became a collaborator and brought in Swedish experimental label INGRID. The result is an album that Ebeing describes as “Repo Man meets To Live and Die in L.A. by way of Sweden and Japan.”

Ebeling, Menzies, and Stehrenberger are already at work on the second book in the planned trilogy, which will feature a brand new soundtrack. The multimedia aspect of the project might extend even further. Ebeling has been toying with the idea of doing an 8 or 16-bit Gunwolf Nintendo game so comic book readers can get a sense of Gunwolf’s universe first hand. But the physical formats come first. “The digital age has produced so much information,” Ebeling says, “I think that, to most people, things aren’t really real anymore unless they’re tangible objects. Just two years ago I pitched the idea of putting out a cassette tape and everyone thought I was insane!”

Cartoonist Jack Chick Has Died, Leaving Behind a Lifetime of Evangelical Comics That Fascinated a Generation

Marvel’s New Thor Will be a Woman

Lettermania: The Late Night Host Stars in a Comic Book