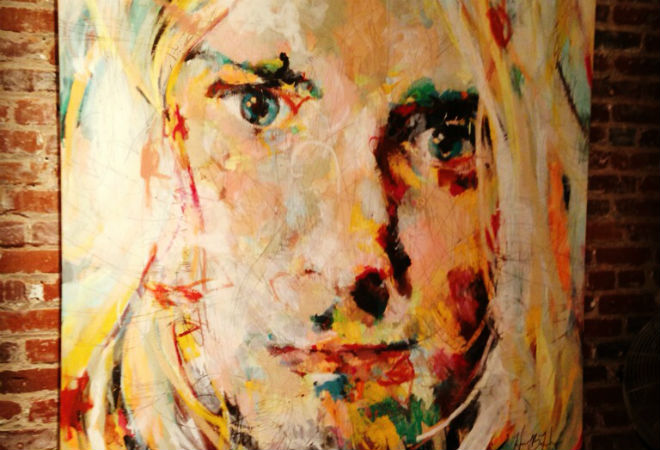 The last time we caught up with Los Angeles rockers Grouplove, we found them piled on one another on a couch at Humphrey’s by the Bay in San Diego, where the band was set to play one of their high-energy shows. As the presidential debates played in the background, we talked about their almost serendipitous six-degrees-of-separation meeting and the success of their debut album, Never Trust a Happy Song. Nearly a year later, the hard-working band is celebrating the release of their second album, Spreading Rumours. The schedule was packed with two hometown shows, an appearance on Jimmy Kimmel Live, and an art show curated by the band’s artist-in-residence, Hannah Hooper.

Held in a pop-up space downtown, I’m With You, Hooper’s first solo art show featured her vibrant paintings, portraits, Polaroids from the road, and a repainted piano from her Silver Lake home. It’s a natural extension of her role as Grouplove’s art director; Hooper’s artwork adorns album covers, tour posters, merchandise, stage design, Christian Zucconi’s guitars, and anything else she can get her paintbrushes on. Often impressionistic and always a bit psychedelic, Hooper’s work glows with deft and modern use of color, even when portraying tragic figures. It’s a juxtaposition that meshes seamlessly with Grouplove’s bright sound, often paired with heavier lyrics. Proceeds from a limited number of signed prints went to the Chipotle Cultivate Foundation, the restaurant chain’s philanthropic arm that promotes socially-conscious agricultural practices and culinary education.

An established, though never formally trained, artist in New York, Hooper never had any ambitions to be in a band. After meeting musician Zucconi, she invited him to an artists’ retreat on the island of Crete; they are now husband and wife. In Crete, they met the rest of the band: L.A.’s Ryan Rabin and Andrew Wessen and London’s Sean Gadd.

As Grouplove’s album release week drew to a close, Hooper spoke with us about the dual hats she wears as a visual artist and a music maker.

How did the gallery and the partnership with the Chipotle Cultivate Foundation come about?
We played the Cultivate Festival in Denver last year and began a relationship with the guys at Chipotle then. They’re interested in helping artists purse passion projects without trying to make it overly-branded or too involved. We approached them about this gallery idea, and they were on board from day one. They’ve let us take creative control and I’m really happy with how it turned out.

Who inspires you artistically?
I started painting because of my brother, Nate, who now runs a gallery in San Francisco called the Popular Workshop. He has always been incredibly supportive and inspiring. Also, Christian taught me to push past my comfort zone in art and music and he’s shown me that there is a power in collaborating.

In addition to Grouplove-inspired art, the gallery features paintings of Kurt Cobain, Judy Garland, and JFK. What are you trying to convey with your interpretation of these figures?
As subjects, I am typically drawn to iconic figures whose loaded narrative can help draw the viewer in because of their familiarity. This gives me greater freedom to experiment with the painterly process of making images.

How much of your total body of work is on display?
Some of this work dates back to 2008 when Grouplove was just a shot in the dark. I constantly produce work; this show is part of a significantly larger body of work from the last five years. I’ve got sketchbooks for days.

Will you sell any of the artwork?
Initially, I hadn’t planned on it because I didn’t know what the response was going to be. But after this show, definitely.