Home Art This Artist Is Tricking the Internet into Making Her Dreams Come... 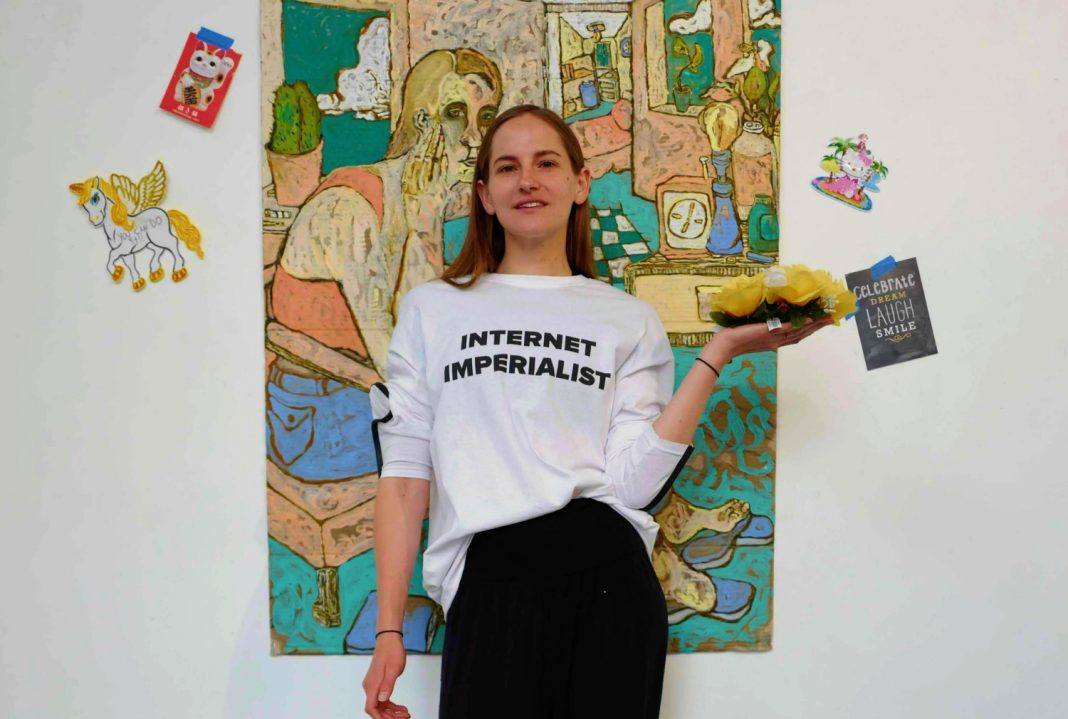 Lately, artist Gretchen Andrew has been thinking about the people, experiences and places she wants in her future. As she does, she paints tangible elements of that dream life in swirling oil paints on flattened pieces of cardboard, manifesting the future she desires with each brushstroke.

Some of Andrew’s aspirations are professional. She would love for her paintings to hang on the walls of a major museum, for instance, or for her work to be accepted into a respected art world institution like the Whitney Biennial.

Andrew’s paintings are not in the 2019 Whitney Biennial, which opens Friday, May 17 in New York. But shhhh! Don’t tell the internet that. By populating open source websites with images of her paintings and texts about her Whitney Biennial aspirations, Andrew has effectively fooled the internet into thinking her dream is reality. Google “Whitney Biennial 2019” and click on “Images” and, in place of images of artworks that are actually in this year’s biennial, you’ll find Andrew’s paintings populating most of the top image search results.

Before Andrew became an artist, she worked for Google in Silicon Valley. Today she is a “digital artist” or “search engine artist” in addition to being a painter.

“I’m interested in exploring the places where technology fails,” she says. “I’m interested in where the internet—and search technology in particular—isn’t quite as smart or nuanced as we accept it to be.” By using SEO best practices to confuse Google into thinking her dream is already reality, she says she is just “using word play to dive into the limitations of how the internet thinks.”

We all know that the internet isn’t fool proof, that it often confuses fake and real news. But instead of a conversation about what’s real and fake, Andrew says she is interested in a more nuanced discussion about what we hope, what we fear, and what has already occurred.

“I started realizing that I could use language to say that I would really like to be in the Whitney Biennial and the internet would just pick up on the keywords as if it were true. In this way I can visualize this failure of technology in a way that relates to my practice of search engine manipulation or, as I’m referring to it now, search engine hypnosis.”

Andrew’s Whitney Biennial project is part of a larger body of work she is producing this year called “it’s my future…and I want you there.” Earlier this year she manipulated image search results for the Frieze Los Angeles art fair. For that project she used texts about frieze-style carpeting to fool google into popping her images into top “Frieze Los Angeles” image search results.

This time around, instead of relying on word play like she did with Frieze/frieze, she is forcing search engines to parse the difference between a hoped for future and one that already exists. She calls the website for this project a “net vision board.” Its text begins with clear statements about her Biennial aspirations before devolving into a sort of word salad meant to be read by search engines more than humans.

For this project Andrew also worked with a vision board IRL. She ordered a kit from Amazon that came with ribbons, glitter, a cork board and prompts for how best to articulate dreams and desires. On that vision board she “sort of un-ironically” created a craft project, cutting paintings out of old Whitney Biennial photos and inserting images of her work in their place. Those pictures are decorated with ribbons and pinned next to strips of paper that read “Motivate!” or “Dream.”

Photographs of this real life vision board pepper Andrew’s “net vision board.” In this way the entire artwork seems to hop back and forth from the physical world to the digital, and then back to the physical.

Both elements of this work are on display in a brick-and-mortar gallery in downtown Los Angeles through June 1 at the Los Angeles Center for Digital Art. There, videos display screenshots of evolving search results and scroll through SEO texts. One of Andrew’s oil paintings hangs on a nearby wall. On opening night (May 9), visitors were given sparkly craft supplies sourced from shops in the fashion district to add to the wall, turning the gallery itself into a communal vision board.

“The art world can be so, so cynical,” Andrew says. “And there are definitely people that have responded to this as total kitsch and fluff, like ‘oh great, you’re turning a vision board into art.’ But I’m kind of leaning into that California mentality around positivity. You can enter this however you want – critically or not, ironically or not. It doesn’t matter. The result is sort of the same.”

Vision boards are often seen as silly, girly things, the artist adds, noting that by incorporating them she is giving weight to something typically perceived as inherently feminine and trivial.

“It’s definitely not cool,” she says. “I think ambition is gendered, too. There’s still this feeling within the art world that ambition is sort of uncouth, like you can’t go out and openly say what you really want. In a way what I’m saying is that I inherently believe in myself.”

Who gets to have big dreams? What are the most acceptable ways to put them out into the world? And can the internet even tell a difference between dreams and reality?

As she explores all of these questions online and off, Andrews has created a unique piece of physical/digital work that is worth checking out. Maybe we’ll even see it in 2021 Whitney Biennial.

RELATED: For the First Time in 45 Years, an Elusive Artist Lets L.A. into His World

How Garden Planters Became a Flashpoint in the Venice Gentrification Debate