Home Film How Green Book Stacks Up Against the Race-Relations Movies of the Era... 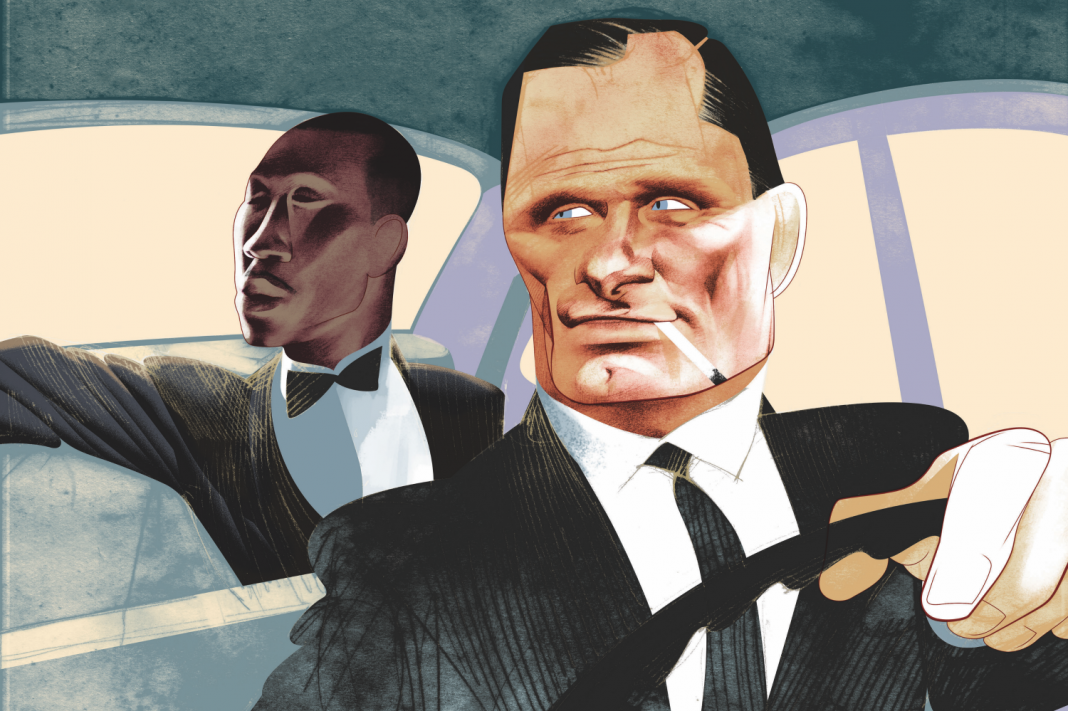 Cluelessly white, suspiciously male, and I swear not a day over 242 years old, I had never heard of the real Green Book until I saw the new film Green Book. Published by a Harlem postman and used widely in the 1930s, ’40s, and ’50s, the Green Book was a traveler’s guide for “Negro motorists” on how to negotiate American apartheid and run Jim Crow’s gauntlet of whites-only hotels and restaurants.

In the movie, based on a true story, Tony Lip (Viggo Mortensen) is given a copy of the Green Book by jazz giant Don Shirley (Mahershala Ali). An uneducated brute who throws in the trash any drinking glass that’s touched a black mouth, Lip is the white bouncer at New York City’s Copacabana, breaking up brawls and getting blood on his clean white tuxedo shirt. Shirley is a cultivated black prodigy of taste and erudition who won’t eat a piece of fried chicken as a matter of principle. He hires Lip as his bodyguard and driver for a tour of the Deep South, where Shirley will play piano in the parlors of rich white racists who won’t let him use their bathrooms. A sharp new teal Cadillac is the two men’s great equalizer, Lip taking one kind of control at the wheel while Shirley imposes another kind from the back seat, each defiant in identities forged by the country’s social and racial tyrannies.

It’s been 60 years since a movie called The Defiant Ones, and although its metaphors had the best intentions, they weren’t subtle. Two convicts shackled together— a black man, Sidney Poitier, and a white bigot, Tony Curtis—make a break for it, each one’s fate determined by the other. This was four years after the Supreme Court ruled segregation unconstitutional, three years after Rosa Parks maintained her seat on the bus and cemented her place in American history, two years after an African American bus boycott in Alabama, and one year after President Dwight Eisenhower federalized the National Guard to integrate schools in Arkansas. So if The Defiant Ones is a picture that now appears more significant than great, its bold impact at the time is beyond dispute. It advanced Poitier’s growing status as the most formidable African American film actor of his time; and along with Sweet Smell of Success the year before and Some Like It Hot the year after, it liberated Tony Curtis from narrow perceptions of him as a mere matinee idol. Both Poitier and Curtis received Oscar nominations, and while their shackling may have been good for a message about race relations, it was less so for award winning— the two split the vote so Brit David Niven could steal the prize.

Obvious as its setup is now, the symbolism took a while to exhaust itself. The Defiant Ones was remade many times, sometimes under the same title (as in the case of a 1980s TV movie), sometimes under different titles (the instantly forgotten Fled in the ’90s), or mixing up the formula in terms of gender or genre (the blaxploitation Black Mama, White Mama and science-fiction The Thing With Two Heads, both in the early ’70s). Over time the same story came to be told without the literal chains, the most noteworthy—almost a decade after The Defiant Ones—being In the Heat of the Night, which bound a northern black cop to a small-town good-old-boy police chief in the same ’60s South as that of Green Book. Fastened by nothing but mutual hostility, they solve a murder. Due next month from Criterion as one of the label’s typically superb Blu-ray restorations, In the Heat of the Night was somewhat overrated in its day; at that year’s Oscars less than a week after Martin Luther King’s assassination, it beat out Bonnie and Clyde for Best Picture. Nonetheless it remains a sturdy little thriller half a century since its release, with irrefutable chemistry between its antagonists (Poitier again, by then the biggest movie star in America, opposite the excellent if showy Rod Steiger) and a script more nuanced than one might remember. 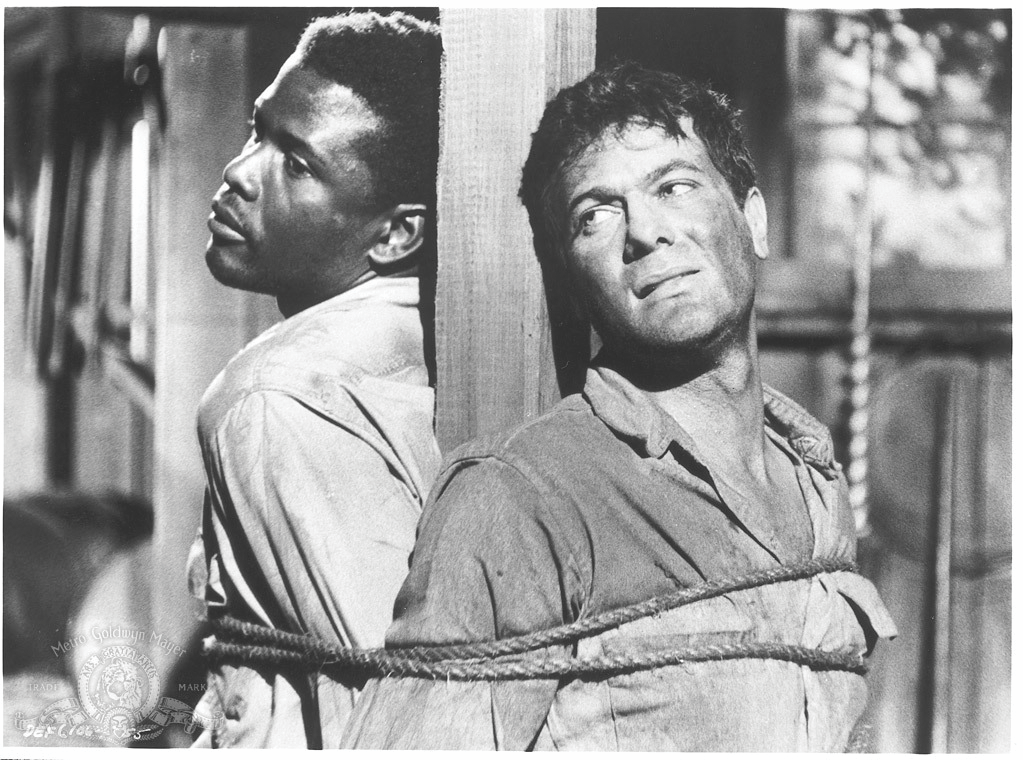 As lonely in his own way in his own town as Poitier is, Steiger’s character takes on more sympathetic shadings over the course of In the Heat of the Night that never excuse his racism but allow us to understand it. In the meantime Poitier’s investigative expertise risks becoming warped by black rage. The episode in which he returns a Southern plantation owner’s slap is a landmark—reportedly the actor took the role only in exchange for a guarantee that the scene would play in every version of the picture that screened in every part of the country—but what gets overlooked is its coda: Back at his car, as Poitier resolves to nail the owner for the unsolved murder and bring him down whatever the facts may be, Steiger stares at him in wonder and remarks, “Man, you’re just like the rest of us.” The expression of shocked realization on Poitier’s face is the movie’s most revelatory moment.

Parked on a Southern side road in Green Book, Don Shirley gazes out the back window of his Cadillac at African American hands working what could be the same plantation, and if the shock on his face is quieter than Poitier’s, it’s no less profound. It’s not just that 100 years of American history might as well have never happened, but that the folks in the field gaze back at Shirley with no more comprehension than any white man ever has, as if they find him just as “uppity,” as if to say, “Just who do you think you are?”

“I’m the great pianist Don Shirley,” answers the look on the face of the Cadillac’s passenger. But his eyes answer, “I have no idea.”

Proving that almost no one or nothing is irredeemable, Green Book is aptly directed by Peter Farrelly, the auteur of Kingpin, Dumb and Dumber, and There’s Something About Mary. Like In the Heat of the Night, it isn’t quite great but is irresistible anyway and may prove as durable, with a script cowritten by Tony Lip’s son, Nick Vallelonga, who’s less concerned with agendas than with developing the unlikely moment-by-moment bond of two men a thousand miles apart in their Cadillac, and with—like Poitier opposite Steiger or Curtis—a powerhouse tandem of actors. Achieving stardom at the turn of the millennium in Lord of the Rings, Mortensen has parlayed new clout into riskier career choices in more maverick projects: the Russian hit man in Eastern Promises, the nomadic father in Captain Fantastic, and now, farther than ever from Middle-earth’s one true king, Aragorn, the gone-to-seed Lip who enters hot-dog-eating contests to support his family. Mortensen will deservedly be in the mix come Oscar time. Without giving away too much, however, Green Book’s most wrenching moment belongs to Ali, standing in the rain on a highway at night, all that defiance reduced to puddles at his feet, finally asking himself the same question those field hands asked, whose answer Lip can’t provide and the Negro Motorist’s Green Book can’t map.

RELATED: The Oscars Have Never Had a Latinx or Asian-American Host—Here Are 7 Suggestions