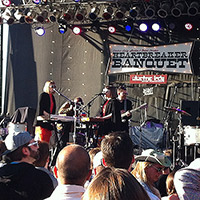 While there was a huge cloud over this year’s SXSW festival because of the terrible accident on Thursday morning at the Mohawk music club near the Red River entertainment district, and the chaos level of the event is honestly overwhelming, it’s hard to escape the magic of being Austin when there is live music wherever you walk, wherever you eat, wherever you sleep. Here are some of my favorite moments from this year’s festivities.

Phil and Dave Alvin on the same stage at the Guitartown/Conqueroo Day Party
Dave and Phil Alvin of The Blasters haven’t recorded an album together in 30 years. Dave departed The Blasters for a solo career in 1986, and the brothers have been known to have a rocky relationship. One thing they can agree on, though, is the music of Big Bill Broonzy, a 1920s blues songwriter, who Phil says heavily influenced how he sang in The Blasters. This year’s SXSW saw the debut of songs from Common Ground: Dave Alvin + Phil Alvin Play and Sing the Songs of Big Bill Broonzy, which will be released June 3 on Yep Roc Records. Their hometown gig will be June 14 at the Troubadour.

Lucius at the Heartbreaker Banquet at Willie Nelson’s ranch
Brooklyn-based group Lucius didn’t exactly fit the traditional Americana sound of some of the bands at this one-day music festival out at Willie Nelson’s private ranch in Luck, Texas; but their perfect pop performance blew the audience away. The two charismatic female lead singers, Jess Wolfe and Holly Laessig (dressed exactly alike in melon-colored lace dresses and black capes), stood at keyboards and sang with voices that blended together with flawless harmonies. Three guys—also nattily dressed—backed them with guitars and drums on songs ranging from ‘60s girl group to catchy indie pop.

Hooray for the Riff Raff through the window of an old timey western church
Nelson’s ranch served as the town in his movie Red Headed Stranger in 1986, so there’s a general store, a saloon, and naturally, a small church. The chapel was so packed full of people eager to see the performance of Alynda Lee Segarra and this terrific southern country/folk and blues band from New Orleans that hordes of the rest of us gathered around each of the six windows on the sides of the church to be able to hear. Their fifth album, Small Town Heroes, came out earlier this year.

The Autumn Defense at the Continental Club
Since 1999, this band has been a side project for John Stirratt, the bass player in Uncle Tupelo and Wilco, collaborating with multi-instrumentalist Pat Sansone. Eventually, Sansone also joined Wilco, and the busy recording and touring schedules of said group doesn’t allow much time for a side project. The Autumn Defense rarely tours, so having the chance to watch such seasoned musicians doing something just for fun was a real treat. They showed off songs from their latest album of ’60s-style rock and pop released earlier this year, entitled Fifth.

Lou Reed tribute at the Paramount Theatre
Austin’s own Alejandro Escovedo along with musician and concert promoter Richard Barone of The Bongos put on quite a party in honor of Lou Reed.  For over three hours, a stellar house band backed a huge assortment of musicians (including The Strypes, Louise Goffin, Rosie Flores, Steve Wynn, Wayne Kramer, Lucinda Williams, The Black Lips, Spandau Ballet and Sean Lennon, to name a few) in a fitting tribute to the influential poet/rocker.  His entire catalog of songs was featured in styles that were all over the map, and no performance was more touching than the speech given by Reed’s classmate at Syracuse and life long friend, Garland Jeffreys, before a lively rendition of “I’m Waiting For My Man.”