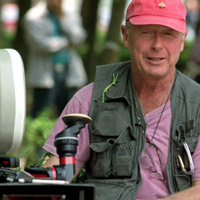 I should have a better Tony Scott story. I spent two days on one of his film sets just outside of Las Vegas in 2002. It was for an ambitious 8-part digital film series by BMW called The Hire, which starred post-Croupier-era Clive Owen in the recurring role and an A-list lineup of talent, including David Fincher, Ang Lee, and John Frankenheimer taking their own turns at the helm. For those couple of days, Tony Scott (for some reason you always want to say his first and last names when you refer to him) was shooting Beat the Devil, a Faust-meets-Funk fable starring Owen, Gary Oldman, and the Godfather of Soul James Brown (posted below). I was a film correspondent for Entertainment Weekly at that time and flew out to visit the set.

And what a set it was. The location was a brick oven-hot stretch of desert about an hour or so outside of Vegas with a sun that was so strong, it melted the bottoms of my Converse low-tops and made the plastic of my Bic pen bubble as I attempted to write down the details of what I saw: Clive Owen in a Bond-worthy “Driver” suit, Gary Oldman mincing around in a glittery unitard and pointy court jester-like shoes, and James Brown in a gold jacket, sporting a boxy pompadour hairstyle that made his giant head and small body look like a human-sized Bobblehead. It was flashy. It was surreal. It was loud. And, for a film that was supposed to be 10 minutes streamed over the pre-YouTube era Internet, it was HUGE. Camera rigs, squealing sports cars–helicopters, maybe?–and in the center of it all, perhaps the only director who could steal attention away from a cast like that, was Tony Scott. That day, like everyday, he wore his signature baseball cap with the slightly frayed brim (distressed, I was told, by his constant tugging on it) and replicas of that hat–including that distressed bit–were manufactured in bulk for the crew to wear, which they all did. I want to say he was smoking a cigar. It’s been 10 years, so if I’m wrong and he wasn’t smoking a cigar, I remember him that way because every other physical gesture he made was that of a Big Director. Like a Big Director, he sat behind a giant camera, squinting like he was aiming between the cross hairs before yelling “Action!” with a raspy British accent. I’ve seen stories that describe him as “soft-spoken.” This is not my memory. My memory is of a scratchy voice that could be heard clear across the sand.

Scott was the first Big Director I got to watch work and, like a Big Director should, he didn’t give a rat’s ass about me. He wasn’t a filmmaker who invited some pale, sweaty reporter to sit up close on an apple crate and watch the monitor. So I timidly stood by the car company’s PR girl and tried to blend into the landscape like a lizard on a rock. It didn’t matter. After a few minutes of my being there, Tony Scott stopped the production and hollered, “Who do we have HERE? Who are YOU?” And I experienced a 20-second social speedball of fear (he noticed me!)  and flattery (he noticed me!) I don’t think I’ve ever felt since. Watching Tony Scott make a film–even one that was a souped-up car commercial that nobody would have the bandwidth to watch at the time—was like getting 100 times the amperes of other directors.

I’ve been on many film sets since and have met directors, from the humble mumbling of Peter Jackson to the tweeded cool of Alexander Payne, but Tony Scott I will remember as the Big Director. He was the one big enough to handle the sexy, splashy, corny, Kenny Loggins-pumping Epic: fighter pilots, British spies, CIA agents, hapless hookers, lesbian vampires, with the creative heft to match talent with Tarantino, Tom Cruise, David Bowie, Catherine Deneuve, Gary Oldman, and the Godfather of Soul himself. I can only speak to my brief window of watching him work over a couple of sweltering days, but he struck me as one of a handful of unabashed Big Directors who, just like his movies, were built to take up a lot of space.

I never ended up writing an EW story, but I did get a baseball cap (with the distressed brim) and a memory that, until now, I’ve never had a chance to share.