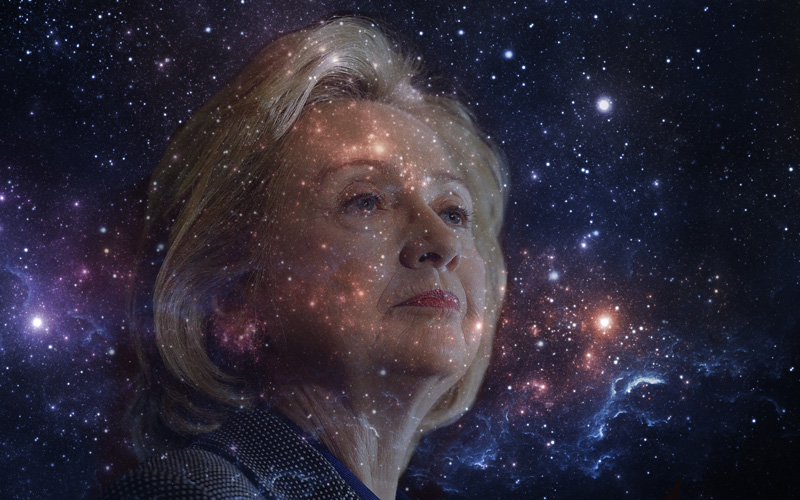 Here’s something nice to think about: It’s not at all inconceivable that somewhere out there in our infinite universe are an infinite number of people on infinite earths breathing infinite sighs of relief because Hillary Clinton just got elected president of the United States.

We just don’t happen to live on any of those earths.

See, multiverse theory is a real thing, and it assumes that if the universe is spatially and temporally infinite, everything that could exist pretty much does. Arguing such allows us to reconcile quantum mechanics with relativity. Or something like that. All you need to know is that there are cosmologists who postulate that the universe is permanently expanding faster than the speed of light, leaving behind innumerable “pocket universes” filled with worlds. On some of those worlds the laws of physics are entirely different than they are here. On others, time moves backwards. On others, we chose not to elect a man who boasts about sexually assaulting women, and elected a woman instead.

Somewhere out there in the multiverse, there’s an identical version of you—no, actually, it’s slightly better-looking version of you because why not?—but instead of sitting here feeling moderately ill as you assure yourself that nope, this isn’t all just a nightmare, you’re fist-pumping in unison with your slightly better-looking coworkers because the United States just elected a candidate who isn’t itching to upend the Geneva Conventions.

Somewhere out there, there’s a world where the KKK is sad right now.

On other worlds, Hillary still doesn’t win, but at least we don’t elect the guy who leans into xenophobia to galvanize his voter base. In some of those universes, our new president is Evan McMullin. In others, our new president is Amy Poehler in character as Leslie Knope. In still others, Kanye is president, which honestly isn’t at all implausible, given that he essentially has the same list of qualifications that got Donald Trump where he is today (i.e. he speaks his mind, he’s pretty misogynistic, he’s a self-made and wildly successful businessman, he’s turned his name into a lucrative brand). In others, cephalopods are the dominant life form and humans are their contented pets. In others, Donald Trump still wins the election—only in those worlds he’s a sentient jar of kimchi with a really progressive agenda, so it’s all good.

The long and the short of it, though, is that all those worlds are currently far out of our reach. As the multiverse would have it, we’re stuck here in what seems to be the darkest timeline. So what can we do? We can deal with it. Until Elon Musk develops a way for us to fly through space and time to join our multiverse selves on a utopian planet that happens to be made entirely of Tofurkey, our only choice is to keep fighting the good fight. And it’s not just about leaving the Bernie bumper stickers on your car and retweeting Patton Oswalt (though the latter is important). It’s about demanding justice, speaking truth to power, taking vague platitudes and turning them into action, and giving a voice to the marginalized and oppressed—here and around the world.