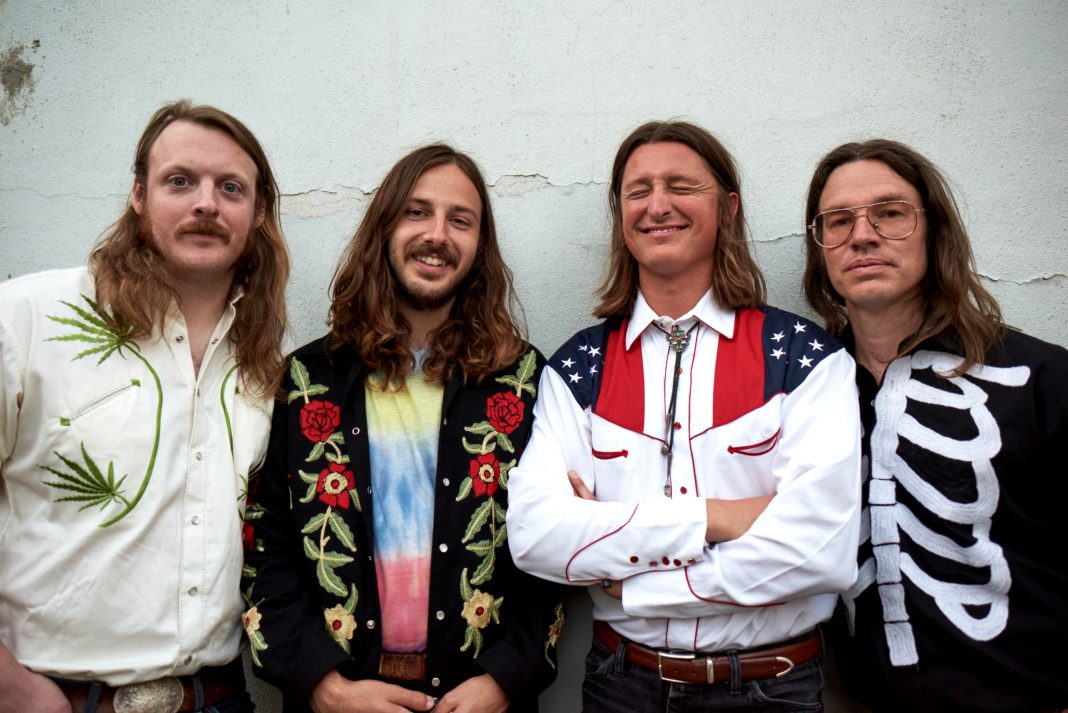 In an Echo Park backyard one afternoon last year, a few dozen beautiful Angelenos gathered to listen to the music of the good ol’ Grateful Dead. Sipping cans of Miller Lite and sporting their best vintage denim, people at the party didn’t exactly fit the stereotype of a Dead cover band’s audience.

But then again, Grateful Shred isn’t your stereotypical Dead tribute act. The band, made up of a rotating cast of local Los Angeles musicians, including members of the Growlers, Dawes, Mapache, and the Jonathan Wilson band, is a good bit younger (and better dressed) then most Dead devotees. And the band isn’t concerned with dutifully recreating each song note for note, instead seeking to channel that ineffable Dead “vibe.”

“We have a carefree approach in a pretty deliberate way,” says bassist and bandleader Dan Horne. “We’re not going to pick apart solos or try to copy tones. Coincidentally, the way we play happens to be similar to how Phil, Jerry, and Bob played, so we end up coming at it in a similar way to how they did when they were young.”

Grateful Shred formed in 2016 when local country artist Austin McCutchen asked a few buddies to play Dead covers to fill a residency at the Griffin in Atwater Village. The band performed at Echo Park Rising later that year and began booking gigs around L.A.

The group’s core members—including McCutchen, and Sam Blasucci and Clay Finch of the folk duo Mapache—later moved into Horne’s house and home studio in Echo Park. That space was christened “Liberty Hair Farm” and serves as the band’s rehearsal space and an occasional concert venue. There, they enlisted some filmmaker friends to record a series of quality live videos that quickly gained traction on YouTube. It wasn’t long before the Shred was touring across the country and headlining venues as far as the Brooklyn Bowl in New York and the Velvet Underground in Toronto.

Between the massive touring success of Bob Weir’s revamped Dead & Company, a high-profile Amazon Prime documentary, and a five-CD tribute album organized by indie rockers the National, the Grateful Dead is in the midst of a renaissance of sorts. Horne attributes the rekindled interest to a kind of collective social need for the Dead’s organic meld of American music and takes-all-kinds sense of community. And nowhere is this more apparent than in L.A.

“There’s a cool scene of young bands and a ‘lot art’ scene that is having a really cool resurgence,” he says. “And we’ve definitely tapped into that. We’re friends with lot of those artists and collaborate with them.”

Two of those artists are Elijah Funk and Alix Ross, founders of local T-shirt operation Online Ceramics. Funk and Ross mix the psychedelic skull and roses imagery of the bootleg merch hawked in parking lots outside Dead shows with the punk and hip-hop aesthetic of high-fashion streetwear. The unlikely mashup has landed Online Ceramics’ shirts at La Brea boutiques such as Union Los Angeles as well as in a feature spread for GQ in November.

As vintage Dead T-shirts become sought-after fashion accessories, Grateful Shred may be a perfect match for a cohort of Deadheads more accustomed to scanning Instagram for Liquid Blue tie-dyes than seeking out rare live concert tapes. That’s not to suggest the band’s success is all about its image. The group really does succeed in capturing the Dead’s classic early-‘70s sound and feel in way that few other cover acts can.

And while each of the band’s members is involved with his own project within the burgeoning Americana scene in neighborhoods east of Hollywood, Horne says the Shred intends to keep on truckin.’

“As long as people keep wanting us to play and keep asking us to play, we’re going to keep playing,” he says.

Uncovering a Secret Gem From the Aquarius Theatre’s Psychedelic Past