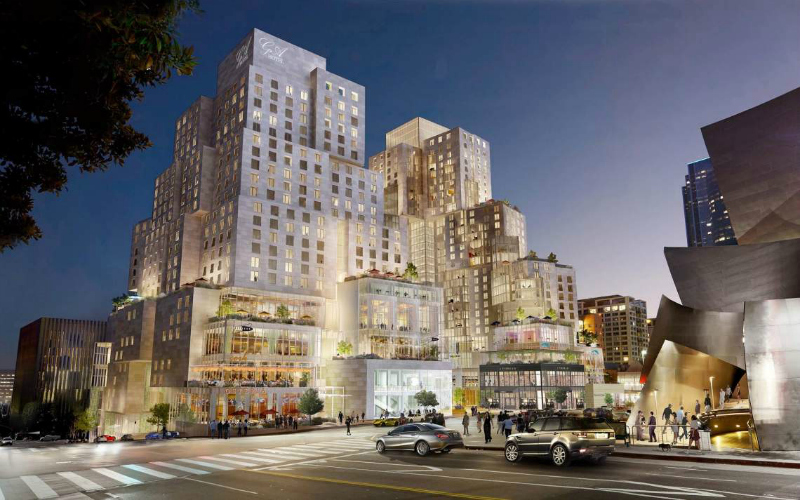 After years of delays and changes of plans, the final major phase of DTLA’s Grand Avenue Project, a Frank Gehry-designed high-rise complex to be constructed on a plot across from the Disney Concert Hall, looks set to break ground at long last.

Building permits filed on Friday list a 2018 start date for the $1 billion construction project, Urbanize.LA reports. This new development is part of a decade-long effort to redevelop Grand Avenue, a project that started with the opening of Grand Park and has already included construction of the Broad Museum and Emerson Tower.

The development ― currently referred to as Parcel Q, though we’re assuming a catchier name is in the works ― is an ambitious one, featuring two large buildings arranged around a public plaza.

On one side, a a 39-story residential tower at the corner of 2nd Street and Olive Street will hold 128 condos, and 300 rental apartments, almost 30 percent of which will be earmarked as affordable housing. Next door, a 20-story tower will include a 305-room hotel. Initially, the SLS chain had been on board to take the space, but that deal fell through, and instead it looks like the Equinox gym brand will move in with its second fitness-minded hotel concept (the first will open in New York City next year). The street-levels of both buildings will be occupied by mixed-use retail spaces; specific tenants are not yet confirmed.

If all goes according to plan, the complex will open to the public in 2022, marking yet another major moment in the evolution of Downtown L.A.

RELATED: Five More Yayoi Kusama Infinity Rooms Are Coming to the Broad, and You’re Going to Lose Your Mind