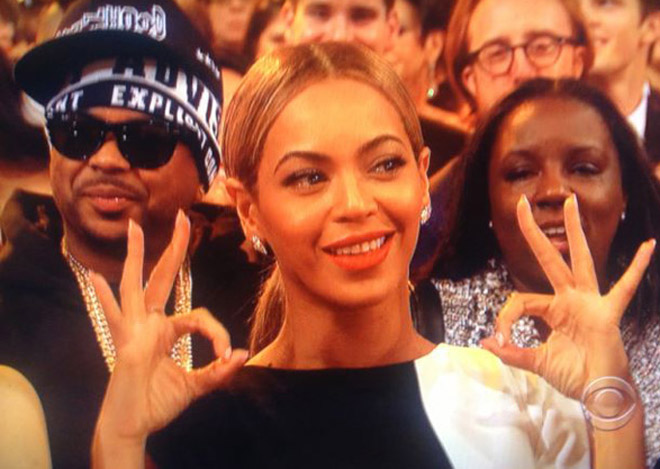 Welcome to the Grammys circa 2013, where viewers know about every winner, every outfit, and every awkward transition hours before the show airs. It’s not cultural clairvoyance — though our predictions held up well — it’s because CBS delayed the West Coast broadcast until primetime. (What, the Olympics weren’t bad enough?) The internet, however, sleeps for no network. By the time 8 p.m. rolled around, we were primed to watch the taped show despite the farcical sight of LL Cool J urging viewers to Tweet “memorable” moments we hadn’t yet seen but already remembered.

1. Let’s Do the Time Warp Again
Watching Justin Timberlake’s sepia-toned performance of new material, did you feel like you were at a Bar Mitzvah in the 1950s? Us too. We would have danced the hora from home, but we were a few bodies and a chair short.

2. Block the Mic
Why was the microphone permanently fixed to 5-feet? No one knows. While Kelly Rowland (and nearly every other lady) had to bend over to read her canned patter, it was perfect for Prince (in full Dementor garb) who finally had a chance to tell Gotye how much he loved “Somebody That I Used to Know.”

3. Beyoncé Represents
In a completely off-the-cuff moment, she threw up the sign for the third ward in her hometown of Houston. Bey is the Queen of the World but never forget that at heart she’s still a Texas girl.

4. Jay-Z Gets His Digs In
Halting the “get off the stage now” music, he approached the mic so he could make fun of the The Dream — after they had just won an award together.

5. Miguel Makes Everyone Swoon
His super sexy rendition of “Adorn” made Kelly Clarkson swoon, but the best part of Miguel’s performance was imagining a producer saying, “Yeah, smooth R&B will be the PERFECT segue into Best Country Album of the year.”

6. Frank Ocean’s Magic Legs
Though his vocal performance was underwhelming, the immersive video of the singer jogging in slow-mo on a deserted road kept us in our seats while letting us pretend we were finishing our own marathon.