Home Music This Is Why Grammy Nominations Always Seem So Weird 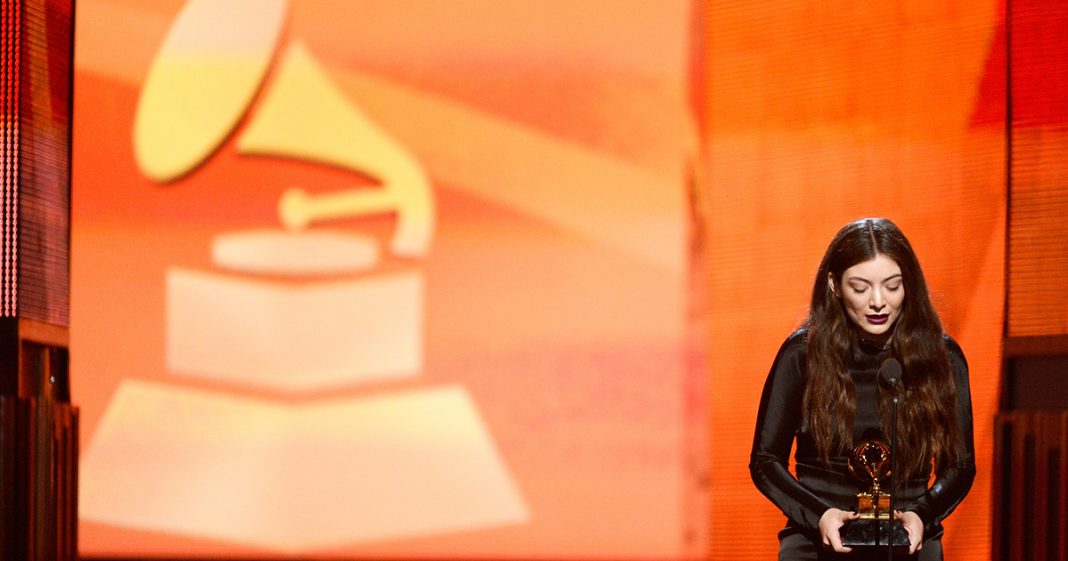 Awards Season is in full swing. Every other billboard on the 405 is a plea “for your consideration.” But this year’s Grammy nominations have a story beyond the typical red carpet drama, and it has to do with the entertainment industry’s complicated relationships with race and gender.

For the first time since the awards’ inception in 1958, not a single white man, not even a backing player, is in contention for Album of the Year. The Grammys have struggled in recent years with public perception that they routinely award white artists over people of color, with little regard to critical acclaim or artistic merit (think: Taylor Swift taking home the AOY trophy for 1989 the year Kendrick Lamar’s To Pimp a Butterfly was also nominated).

While it would be nice to believe that this year’s more diverse pool of nominees represents a cultural shift at the Recording Academy, it’s also in part a byproduct of changes to the Grammys’ famously complicated nomination system itself.

How exactly these trophies get handed out can seem like something of a mystery. If you’ve ever wondered what the differences are between Record of the Year and Song of the Year, or been surprised by a Best New Artist nominee that you’ve been listening to for years, you might want to keep reading for a refresher on the Grammy Awards’ most misunderstood rules and regulations.

Who exactly gets to be a “Best New Artist”?

Even the Academy has acknowledged that Best New Artist has some of the most complicated eligibility rules of any category. Ed Sheeran was nominated for Best New Artist in 2014, even after his song “The A Team” was up for Song of the Year in 2013. Of this year’s nominees, Alessia Cara’s debut single “Here” was one of Rolling Stone’s 50 best songs of 2015, and Cara won a Juno Award for Breakthrough Artist of the Year in 2016. Harry Styles was reportedly barred from contention with his new solo project due to his time in One Direction, despite that group never being nominated for a single Grammy.

The official rules are pretty murky on just what it means to be a “new” artist. They state that to be eligible for Best New Artist, an act must have either five singles or one album, but must not have released more than 30 singles or three albums. They also cannot have been nominated for a performance category Grammy in the past, unless that nomination was a single or guest spot and the artist had not yet released a full album at the time. (Remember our friend Ed Sheeran? He was eligible in 2014 because the Song of the Year award is for songwriting, not performance.)

The rules even state that a nominee cannot have entered into the category more than three times, implying that an artist can be considered “new” even after being submitted as a new artist in previous years without earning a nomination. Honestly, what it boils down to is the fairly arbitrary perception that an artist has “arrived.” Apparently, “Best Artist Newly Recognized As Commercially Viable” was too long to fit on a trophy.

Why do records up for Grammys always feel like they came out two years ago?

The most frequent point of confusion regarding the Grammys is when music must come out in order to be eligible. It’s called the 2018 Grammy Awards, but in actuality, this year’s ceremony will honor music released between October 1, 2016 and September 30, 2017. This means all those albums by Bruno Mars, the Weeknd, Lady Gaga, Run the Jewels and the Rolling Stones, that you probably already kind of forgot about are just now getting their time in the sun.

Taylor Swift’s album Reputation would be eligible for consideration for the 2019 ceremony; the singles “Look What You Made Me Do” and “Ready For It…” were released before the 2018 deadline, so they would have been up for song awards this year, but they just weren’t nominated.

Of note: even for consideration in the appropriate year, an album has to be submitted by the artist. Frank Ocean, for example, chose to opt out and not submit his long-awaited sophomore album Blonde.

Are online streams treated the same way as album sales?

Until last year, streaming-exclusive albums were ineligible for nomination because of the Grammys’ definition of “general distribution.” This had to do with what the Recording Academy defined as a “sale” for a piece of music. In a change made just two days after the online-only release of Chance the Rapper’s Coloring Book (just a coincidence?), they updated that rule.

Now, projects that go direct to streaming can be considered, but, since this is the Grammys we’re talking about, they did throw in an extra provision to complicate things somewhat: the only streams that count are ones on services that are available nationwide, offer paid subscriptions, have existed for at least one year, and satisfy certain technical specifications. This isn’t exactly what Chance was looking for when he called for the Academy to consider music that artists choose to release for free online, but it nonetheless lead to him become the first artist to win a Grammy for an album of which no physical copies were ever pressed.

That a hip hop artist would be the first to take home a trophy earned off an internet-only record should come as no surprise to anybody who has been watching the stats. Ratings body Nielsen recently reported that hip-hop and R&B are the dominant genres in the U.S. when it comes to streaming services. Those numbers from streaming services already factor into Recording Industry Association of America awards and Billboard charts. All of these changes have facilitated this year’s Album of the Year shakeup by finally measuring the footprint of hip-hop accurately.

How do the Academy members vote, anyway?

A big update to the infrastructure of this year’s ballot had a big influence on what rose to the top. For the first time, the Recording Academy introduced online ballots. These made voting more accessible to all of the Academy’s 13,000 members, and meant fewer ballots were lost in transit or discarded for being incorrectly filled out. Online voting particularly appealed to young and actively touring members of the Academy, which some observers have cited as another structural factor leading to the rise of hip-hop and R&B across award categories.

While online voting was 2017’s major innovation, the Academy changes the rules often, with so many addendums and expansions that the rule book might as well be the constitution of a small country. Additions in recent years have included a reduction in the number of categories a member can vote in from 20 to 15, and the change of Best Rap Performance to Best Rap/Sung Performance beginning with last year’s ceremony.

Who defines the genre categories?

Some Grammy nominations just seem strange. Leonard Cohen was a Canadian singer, but he may win in the category of Best American Roots Performance. Beyoncé was allowed to enter for Best Rock Performance in 2017, but not for Best Country Performance. Who is deciding these things?

Some definitions of categories, like for Best Traditional Pop Vocal Album or Best Dance Recording, provide a brief description of what constitutes an entry in that genre. But for most, including rock, metal, R&B and country, all that’s stated is that songs must be “newly recorded,” and albums must be “51 percent newly recorded.”

That leaves the sorting-out of genres to screening committees, anonymous groups of “industry experts” specific to each genre that determine who makes the cut. Recommendations from those committees then go on to a final review committee for nominees in the biggest overall award categories, plus some genres like country, R&B, rap, Latin, and jazz. Final review committees conduct their work in private and don’t have to disclose what guidelines they apply to making the ultimate call about the awards.