Home Film Where Do We File Flawed Classics Like ‘Gone with the Wind’? 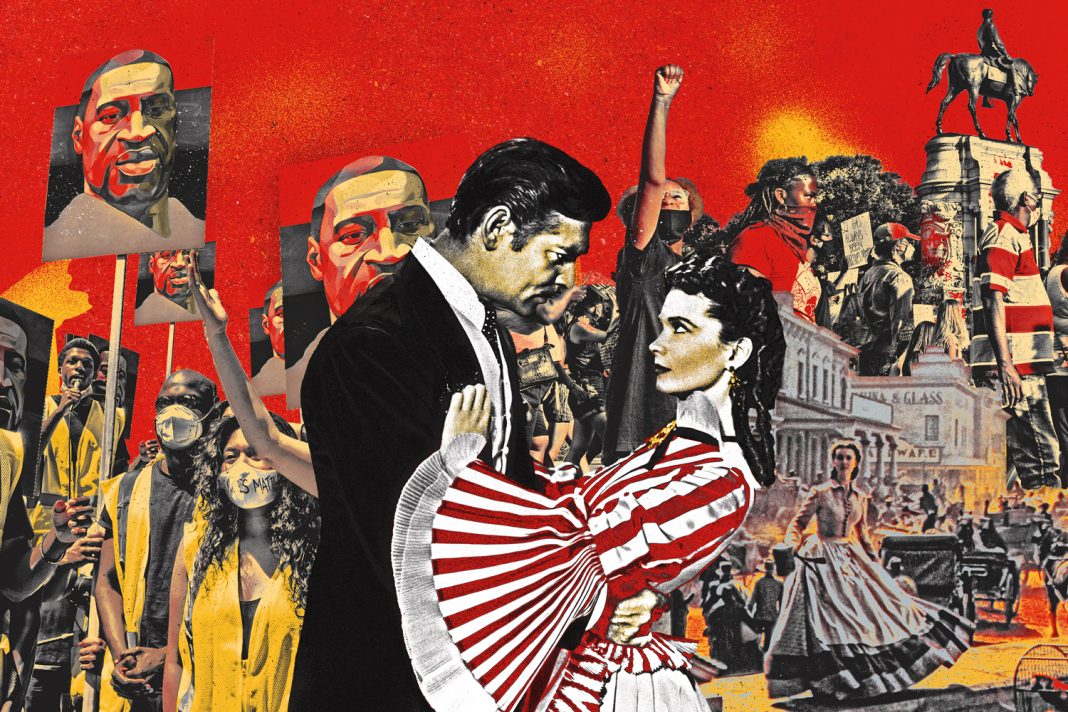 Two pieces of footage—each just a few minutes or less—that, juxtaposed, become a metaphor: The first is from 1939’s Gone with the Wind. Scarlett O’Hara, one of American movies’ most irritating heroines, steps over the body of a wounded Confederate soldier, and as she continues making her way, the camera pulls back in an ever-widening crane shot that reveals what is tens, then hundreds of wounded men, before finally framing a battered Confederate flag flapping in an ill wind.

The second piece of footage is longer, but not by much: A man’s hand is in his pocket as he kneels on another man’s neck. The hand in the pocket is as crucial to this image as the other man gasping for breath and crying for his mother because it answers the question of why this particular footage has triggered such a reaction after a quarter century of such footage, going back at least as far as a phalanx of L.A. cops wailing on another grounded Black man named Rodney King. The hand in the pocket gilds in blood the act of George Floyd’s murder with a gesture of contempt, a gesture of the police officer in question having done something like this countless times before (if not as lethally). For this officer, a nine-minute curbside execution is as routine as going to Starbucks.

This is what finally became too much. Of course it should have been too much long ago. Later there will be questions of whether Derek Chauvin’s hand really was in his pocket, but there won’t be any question about the attitude that recalls a hunter casually posing with a still-thrashing animal he’s just shot. It’s this attitude that will make the tape of George Floyd’s murder one of our history’s indelible images, like the Zapruder film or the towers falling. It’s footage that renders the crane shot in Gone with the Wind irrelevant if not obsolete, but which also renders the ramifications of Floyd’s murder more complicated.

A national moment like this one fuels hundreds of debates about imagery, art, iconography, and all their meanings. Some are easy enough to resolve. Flags flying over a courthouse or statues overlooking a town square speak for a collective sentiment. And if the collective no longer accepts why that flag flies or what that statue stands for, then that flag and statue become less expressions of “history” and more impositions of false history. This is especially true when you consider that a lot of the statues honoring Confederate heroes went up not after the Civil War but after World War II, as a hostile rebuttal to the growing civil rights movement. Tearing down statues and lowering those flags aren’t about “erasing” history so much as choosing to no longer honor that history.

But pull back on a bigger picture, like that crane shot in Gone with the Wind, and you’re bound to see things that are more complicated, such as, say, HBO’s decision a month or two ago to stop screening Gone with the Wind. This was followed by a reversal: the movie would screen after all, but accompanied by academics advising us how to think about it.

The case for removing Gone with the Wind from public view was made most eloquently by the screenwriter John Ridley, who deservedly won an Oscar for 12 Years a Slave, and it was most stupidly protested by the Stepford Barbie who serves as spokesperson for a white supremacist president. So you can imagine which side of this debate I wanted to be on. Not only is Gone with the Wind incontestably racist—beginning with its opening scroll lamenting the passage of a bygone fairy-tale era of knights and ladies, of masters and slaves—but I’ve never thought it was a good movie. Lumbering and episodic, gracelessly directed and poorly paced—with a wildly overrated performance by Vivien Leigh as a character no balanced person would want to spend four minutes with, let alone four hours—Gone with the Wind isn’t one of my top 1,000 American movies let alone one of the top ten, as the American Film Institute would have it. Its limited virtues are Clark Gable, who brought a sense of humor to an enterprise he didn’t want to be part of, and, well, that crane shot.

Obviously Ridley has a moral authority on this matter that a privileged white magazine columnist hasn’t—which doesn’t change the fact that he’s wrong. Gone with the Wind isn’t a statue speaking for public sentiment in a town square; it’s a work of art, however clumsy and racist, and by withdrawing it, however briefly, HBO ran the danger of setting a lousy precedent. The General, from 1926, in which Buster Keaton plays a Confederate, is one of the greatest movies ever made, and in Casablanca, a movie I do love, there’s an appalling moment when Ingrid Bergman refers to the 56-year-old Dooley Wilson as a “boy.” Since this comes just a few minutes before Humphrey Bogart remarks on how he doesn’t buy and sell human beings, it’s a good example of how mixed up Hollywood can be, with dashes of enlightenment slamming up against intractable attitudes. But preceding all these films with talking professorial heads adding “context” is a rabbit’s hole, even if you think it’s a good idea.

The wages of freedom and justice are messy, and nobody, least of all Ridley, needs me to tell him that. We’re living through the most perilous months American democracy has seen in modern times, rivaled only by the final days of the Nixon presidency when it seemed like American society was coming apart. The difference is that in 2020, the American Idea is coming apart. On an episode of Showtime’s The Circus some months back, a woman stood up at a raucous town hall and said, “Never in my life did I think I would like to see a dictator, but if there’s gonna be one, I want it to be Trump,” and while some in the 1960s and early ’70s might have thought that, nobody said it, because it was accepted that democracy is good and dictatorship is bad. Now, amid the greatest pandemic in a century and the greatest economic collapse in 90 years, when police kill Black people with impunity, a wannabe Mussolini teargases peaceful protesters so he can walk to a local church and hold up a Bible whose only value to him is as a public relations tool.

All of this is still part of the bloody asterisk next to the American Promise that ripped the country apart a century and a half ago and that took the blood of a civil war to wash away. God knows most of us will forget not being able to watch Gone with the Wind more easily than we’ll forget the footage of George Floyd’s murder. Nonetheless I feel certain we can overcome racism while still retaining the right to decide for ourselves whether to bypass Gone with the Wind in favor of 12 Years a Slave or Selma or Get Out or Spike Lee’s bravura Da 5 Bloods on Netflix. Or better yet, in favor of creating our own footage of the national atonement at hand.

RELATED: Gone with the Wind is Gone from HBO Max, for Now

12 Years A Slave Screenwriter John Ridley Will Direct His Own Film About the L.A. Riots