Home Film Brace Yourself for the Gone Girl Think Pieces 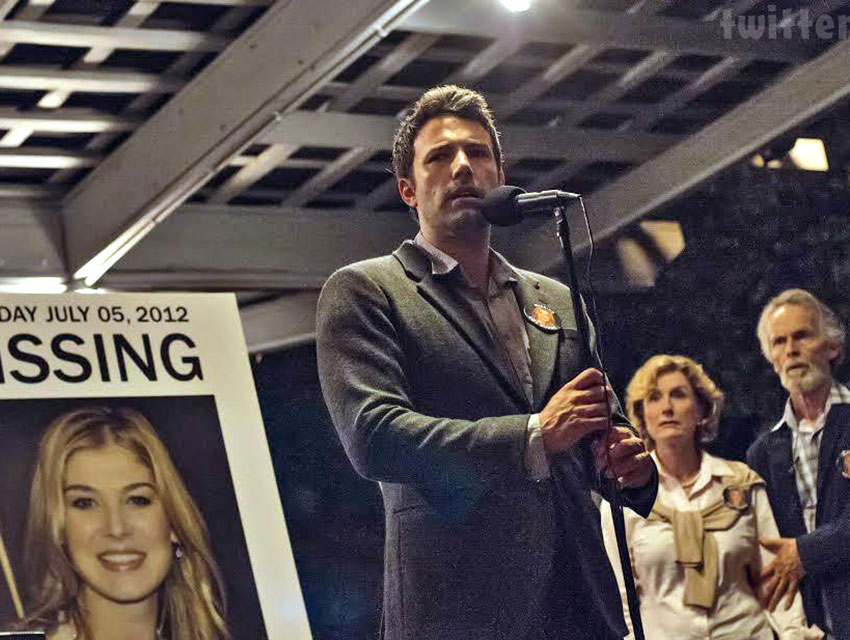 Social media has turned journalism, especially culture writing, into a mad scramble to attract the most clicks. The frenzy rises to epic levels whenever a work touches on something topical. In 2013 we saw countless screeds (most of them online) about 12 Years A Slave, Dallas Buyers Club, and The Wolf of Wall Street, all of which dealt with controversial subjects: slavery and racism, AIDS and LGBTQ politics, corruption and capitalism. Cultural opinionaters and writers of think pieces are about to receive a huge gift: Gone Girl.

WARNING: Spoilers for the book and film ahead.

Gone Girl has attracted controversy since the book came out in June 2012. But discussions of books, even best-sellers, tend not to attract as much attention as ones about movies, television, or music. Since the film stays fairly true to the novel, some of the controversy will tread over the same ground that literary journalists tromped across two years ago: namely, the woman at the center of the plot.

The big “twist” that comes halfway through the story is that Amy Dunne (Rosamund Pike) has not in fact been abducted. Nor has she been murdered by her husband Nick (Ben Affleck). She has gone on the lam and framed Nick for her murder as a retaliation for him moving them from New York to Missouri, cheating on her, and generally failing to appreciate her. Over the course of the film, we also learn that she has inflicted similar punishments on other men, including one guy who she framed for rape. The movie climaxes with her framing another man for abducting and raping her, then murdering him. She gets away with all of it, even managing to strongarm Nick into taking her back.

The Wicked Woman archetype would be enough to stir up discussion, but the movie lands at a particularly charged moment. This has been a tumultuous year for women in the media. The Ray Rice video. The mass celebrity nude photo theft. The Isla Vista shootings. Poorly investigated rape allegations at college campuses. The harassment of women online. Much, much more. Discussion of these issues has hit a critical mass. Into this climate comes a character who possesses every negative stereotype of women as imagined by men’s rights activists.

GoneGirl isn’t alone. This season of Scandal season featured a woman who falsely accused a man of rape (the same episode included a cameo of the Gone Girl book). At least the show had another character explains that only a tiny number of reported rapes are likely to be false. But false rape claims in fiction vastly outnumber those in reality. That wasn’t even the first fake rape plotline on Scandal.

A little context: Gillian Flynn, who wrote the book and the screenplay for the film, is exploring the expectations placed on women, marriage in the modern era, and how the media treats victims and perpetrators. Plenty of writers will dig into whether or not  the GoneGirl movie, directed by David Fincher, succeeds in addressing these themes. At least the smarter writers will. Others will simply condemn the movie or laud it as an authentic depiction of feminine fury.

Here are some headlines you can expect to read in the coming months. They’ll have snappier, better titles, but the sentiment will likely be the same:

Amy Dunne is a character tailor-made to incite fascination and outrage in equal amounts. Flynn, a former writer for EntertainmentWeekly, is at least semi-aware of what she’s doing. Gone Girl contains many knowing digs at cable news and how it feasts on lurid crimes (Nancy Grace in all but name is a major character). Yet there’s something missing. Despite the way the movie consciously explores the media frenzy surrounding Amy’s disappearance, there’s no mention of how the crime resonates on Twitter or in the blogosphere. Not a single Slate or Salon article. Nothing.

Then again, maybe the media frenzy around Gone Girl is a kind of meta-commentary. The nature of think piece culture is that discussion flares up mightily but briefly. The news cycle lasts a few weeks, perhaps a month, depending on the event in question. But Gone Girl is poised to be an Oscar contender, so you can expect to read about it again and again over the next four months: this week, when the nominations are announced, in the leadup to the awards show, and again after the trophies have been handed out.

This isn’t inherently good or bad; it just is. It’s just funny that Gone Girl, maybe the most media-aware movie of the year, will receive some of the same treatment as its fictional characters. Whether the attention is positive or negative, the people who made GoneGirl ultimately want people to watch their movie. Like Amy, they win no matter what. After a while, online pundits (us included) will find a new obsession. And another one, and another one, and another one…