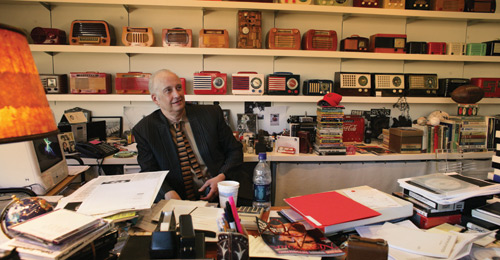 It’s going to be impossible to talk about Art & Copy, the new documentary from director Doug Prey about the most effective advertisements of our age and the people who created them, without drawing some comparison to Mad Men, that AMC hit that’s got everyone who’s still paying for cable gossiping over water coolers about Sterling Cooper water-cooler gossip, so I’ll just go ahead and get it over with:

It doesn’t capture a specific time, place, and culture in our history of ad consumption. It doesn’t (really) explore the gender politics of the advertising industry. And it doesn’t have a Don Draper. Not even close.

What the film does do, however, is cover ground. In the span of 90 minutes, Prey interviews nearly a dozen advertising greats, including Lee Clow (TBWAChiatDay), Dan Wieden and David Kennedy (Wieden+Kennedy), Hal Riney, George Lois, and Rich Silverstein and Jeff Goodby (Goodby, Silverstein and Partners). Together, they make up the multi-faceted personality of the industry: Clow’s the laid-back surfer behind the California Cooler commercials who still calls for “creative people to rise up!”; Riney’s the sentimental, introspective professional who commissioned Paul Williams to write “We’ve Only Just Begun” for Crocker Bank; and Lois is the unapologetically aggressive branding whiz who got Mick Jagger to whine “I want my MTV!” for the channel’s iconic launch.

While the film doesn’t spend enough time with each exec to get to know them outside of their greatest hits, seeing the ads they created again today and hearing the stories behind them is totally entertaining. The “Think Small” ads, which first marketed the virtue of downsizing for the Volkswagen Bug right after WWII, feel (sadly) modern. The then futuristic Apple commercial announcing Macintosh that aired exactly once—during the 1984 Super Bowl—shows a company (and a young, confident Steve Jobs) about to change, well, everything. A terrifying election commercial for President Johnson that urges viewers to vote because “the stakes are too high for you to stay home” over the image of an atom bomb explosion puts Hilary Clinton’s “Who Do You Want To Answer The Phone” ad to shame in a whole new way.

Prey says he hopes the film “inspires artists and writers to strive to make more meaningful, more entertainment, more socially uplifting ads.” It might. Art & Copy shows how timeless great ads can be. If that isn’t motivating, and yes, I mean outside the walls of Sterling Cooper, I don’t know what is.