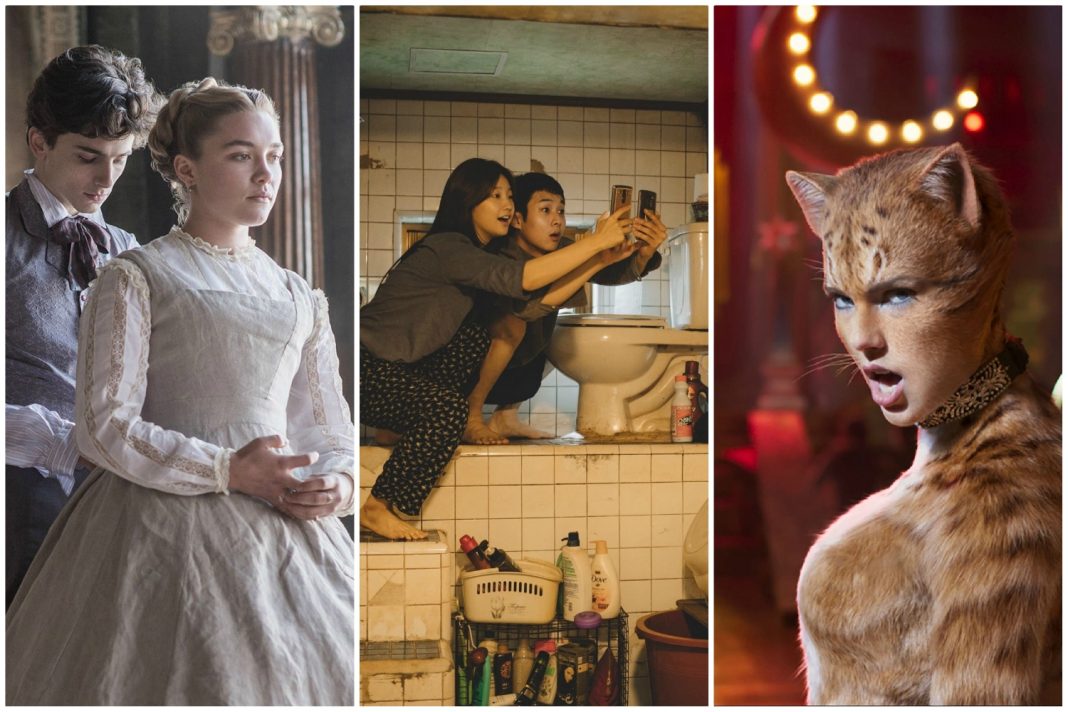 Early this morning, the nominations for the 77th Golden Globe Awards—to be handed out January 5, 2020—were announced, ringing in the most wonderful time of the year in Hollywood: awards season. Around here, we’re not just heading into holidays, we’re heading into around six weeks of festivities that follow them, which bring to town a lot of money, a lot of glamor, and palpable, prickly anticipation among nominees and studio folks.

Last week, film critics groups began doling out awards for the 2019 season, including the National Board of Review, New York Film Critics Circle, and, on December 8, the Los Angeles Film Critics Association. Our hometown critics crowned the South Korean film Parasite as their pick for best of the year; The Irishman dominated most of the other ceremonies. Meanwhile, the Globes nominated Netflix’s Marriage Story more than any other picture, with nods in six categories, including Best Picture; Parasite is up for best foreign language feature but not Best Picture.

Let’s face it, the Globes aren’t known for their credibility, but they are the first major awards handed out in 2020, which gets them a ton of press. Still, they’re awarded by about 90 voting members of the Hollywood Foreign Press Association, making them more subjective than, for instance, the SAG Awards (nominations out December 11), which are voted on by the 160,000 members of the Screen Actors Guild. The Academy Award noms are made by the Academy for Motion Picture Arts and Sciences, with seventeen branches (all professional producers, writers, cinematographers, actors, etc.) and around 7,000 members.

What does give the Globes cred is their champagne-soaked live broadcast that’s been on national television for over 50 years. Airing on NBC, it’s the third-most-watched awards bonanza after the Oscars and the Grammys.

The Globes are also competitive for stars and the fashion designers who’ll compete to dress them, but for no one so much as the studios. Today’s big winner was Netflix, which walked away with a whopping 34 noms, because it makes major theatrical films and television series and movies. As previously noted, its Marriage Story got six nods, more than any other film; The Irishman got five; The Two Popes, four; and the recent third season of The Crown got four noms, as did Unbelievable. The Kominsky Method garnered three.

What does this tell us? First off, Netflix spends the most money on content: prestige film and TV projects. It also spends the most money on awards advertising—ever notice the barrage of billboards on Sunset? Its awards campaigner, Lisa Taback, is the best in the biz, and takes home as much money as many studio execs. It also confirms what’s finally dawning on Hollywood’s old ruling class: Netflix, Hulu, and Amazon Prime now run the town, and streaming services are only becoming more dominant. Part of the old(er) guard, HBO got a respectable 15 nominations, but it’s no longer TV’s top dog.

One big difference between the Globe’s TV noms and September’s Emmy Awards is that all the newest shows pushed through. The Crown season 3, which only launched in November, got 4 noms (Olivia Colman, Tobias Menzies, Helena Bonham Carter, and the show). Apple TV+, which didn’t even exist until September, got its very first nods, all three for The Morning Show. Other fresh properties to be nominated: Showtime’s recent Roger Ailes series The Loudest Voice, Netflix’s The Politician, and HBO’s Catherine the Great.

As always, there were snubs and omissions and other surprising turns of events. Here are a few notable shockers:

» Game of Thrones only got one nomination: Kit Harrington for Best Actor in a Drama. It wasn’t nominated for best show, despite that it just won the Emmy for Best TV Drama in September. Guess the HFPA disliked the last season as much as most of the series’ diehard fans.

» Hulu’s Catch 22, a show almost nobody talked about, walked away with two nominations. But guess who its producer is? George Clooney. And what’s a live broadcast red carpet without George and Amal?

» Greta Gerwig, who the Globes did not nominate for Ladybird, was left out again, this time for her much hailed Little Women.

»  Parasite was just named Best Picture by the L.A. Film Critics Association and is an Oscar frontrunner, but the Globes stuck it in the foreign film category. Do foreign journalists not love foreign films? It’s not that, the HFPA has an arcane rule that foreign films can only be best picture nominees in the foreign category.

» Joker, the year’s most controversial film, got four nominations. Joaquin Phoenix was certainly expected—but director Todd Phillips wound up in the director category too. The guy who directed The Hangover makes good.

» Ford v Ferrari, which got great reviews and has made a lot of money, but got only one nod for Christian Bale—nothing for Matt Damon.