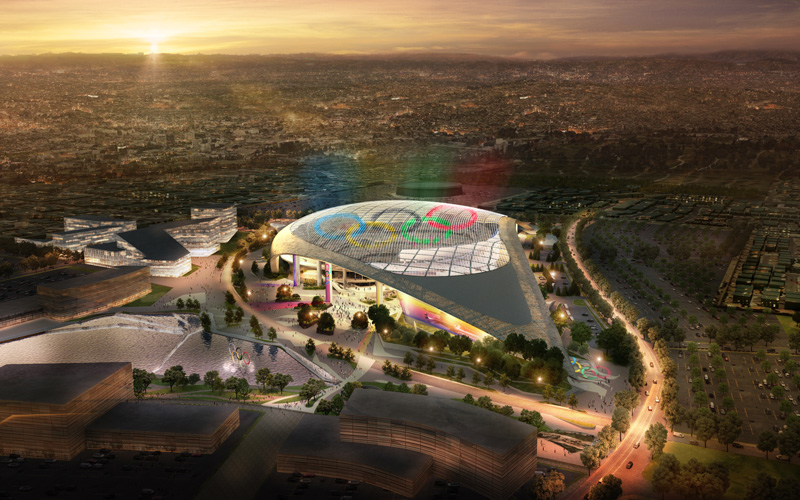 If the Olympics come to L.A. in 2024, surprisingly little about the city would actually have to change. With arenas already scattered throughout our sprawling metropolis and two shiny new stadiums in the works (thanks, The Rams), no new permanent venues would have to be built. That’s a huge money-saver for the city, but it also means the games would be more accessible; events would be spread throughout the county and easy to get to via public transit. Most of the games would be divided between four unique Sports Parks walled off by a secure perimeter, each an island of festivities complete with dining and shopping.

Just because no permanent construction would be required to host the games doesn’t mean the city won’t be visually transformed—stadiums would get revamped and decked out in bright colors and Olympic iconography. These brand new renderings reveal what the city could look like if L.A.’s bid is the winner (Paris, back off).

Soccer prelims would be played here at the soon-to-be built European-style Los Angeles Football Club stadium, with further games at the Rose Bowl.

Swimming and diving—which we can all agree are the second best parts of the Summer Olympics after gymnastics—would take place at USC‘s Dedeax Field.

Basketball would be at the Staples Center, obviously.

And then taekwondo, boxing, goalball, fencing, and boccia would all happen at the Convention Center.

The marathon would finish at Grand Park.

Many of the more outdoorsy type sports—shooting, equestrian competitions, canoe slalom—would take place up in the Sepulveda Basin.

The modern pentathlon, as well as rugby, tennis, hockey, and paralympic football would take place at StubHub Center, with track cycling in the indoor velodrome (fact: it’s the nation’s largest).

Stuff like handball would go down at the Long Beach Arena, with swimming and sailing by the pier.

The new Rams stadium in Inglewood would host the Opening Ceremony and archery.

Honda Center, the home of the Anaheim Ducks, would become the temporary home of indoor volleyball—beach volleyball, of course, would be by the Santa Monica Pier.

In Pacific Palisades, the Riviera Country Club would host golf and tennis.

Judo, wrestling, and sitting volleyball would take place at UCLA, and the school’s campus would also serve as the Olympic and Paralympic Village.

The mountain biking course would be in San Dimas at Frank G. Bonelli Park.

Rowing would be at Lake Perris, out by Riverside.

Finally, gymnastics, the greatest of all Olympic sports, would go down at the Forum in Inglewood.

Thomas Harlander is a staff writer at Los Angeles magazine. You can follow him on Twitter and Instagram. He recently wrote: This Mesmerizing Drone Video Captures L.A. Over the Course of 24 Hours

It’s Official: L.A. Is the U.S. Contender to Host the Summer Olympics in 2024