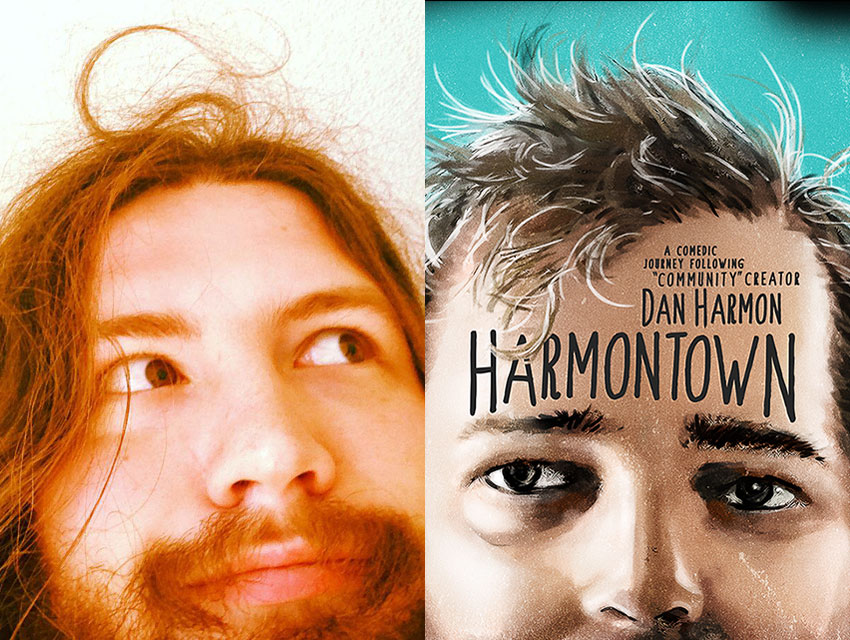 Harmontown is the rare documentary that doesn’t minimize its subject’s failings. Directed by Neil Berkeley (the director of the Wayne White doc Beauty is Embarrassing), the film follows Community showrunner Dan Harmon and his crew—his co-host, fiancée, producer, dungeon master (we’ll get to that in a moment)—on a cross-country tour as he records his Harmontown podcast in a different city every night. We see the famously mercurial Harmon perform to adoring audiences, but we also have the uncomfortable experience of watching him berate and hurt the people closest to him. “I’m his biggest fan, and I fired him,” says pal Sarah Silverman at one point. With that kind of focus, who can viewers root for? The documentary features an unexpected star.

Tall, quiet, and with a pre-Gandalf beard, Spencer Crittenden was just another fan when he showed up at a Harmontown taping a few years ago. “At the first show that I went to, they were like, ‘So we’ve been talking about playing Dungeons and Dragons on our show. Does anyone know about that?’ I was apparently one of the only people there who did. So I came up on stage and answered some questions. I guess I went over well enough to come back.”

In fact, he eventually became Harmontown’s resident Dungeon Master, returning every week to oversee the D&D sessions that occur during the second half of the podcast. “People think of it as a game, but it’s really a group of people coming together to share a story. Kind of like how someone came up with the epic of Gilgamesh. We’re crafting weird, mythological tales, but through a framework. I think that kind of thread has always been a part of my life,” Spencer says.

By the time production on the documentary began, Spencer was such an essential (and beloved) member of the cast that it would have been strange if he didn’t come along. But the travelling was a new experience for him. “Coming from Southern California, it was really interesting to experience different parts of the country,” he says. “It was all pretty overwhelming, because travel is just a stressful and weird thing. I liked meeting new people and talking to them. I never really got the opportunity to be that social when I was younger.” When the film was shot, Spencer was still living in his parents’ house in suburban Southern California.

For Spencer, his social skill development reached its apex in New York City. “It was one of our best shows of the tour. Jason Sudeikis from Saturday Night Live was a guest. After, I heard him saying some really nice things about me. It’s one thing for someone who is a fan of Dan Harmon to like me by association. If [Dan] said, ‘I love Chex Mix,’ all his fans would love Chex Mix. But it was so different to hear someone famous—famous for being funny—heap praise upon me. Every time I think I’m a terrible person, I think, ‘Well, Jason Sudeikis doesn’t think so.’”

While Harmon unravels over the course of the film, Crittenden emerges from his shell. By the end, Harmon acknowledges that if the movie has any hero, it’s Spencer, who brushes off the idea: “I thought it was kind of a weird thing to say. I understand that my story follows a certain arc, but I didn’t really do much of anything. I was just along for the ride. Obviously, they had all this footage with me, but I don’t think they’d taken it thinking that they would be using it. They were going through all the different cuts of the movie, trying to come up with a good narrative. For a while they were struggling, apparently. I believe it was Erin McGathy [another podcaster and Harmon’s fiancée] who suggested that they use my story as a kind of paramount to the journey that everyone was going on.”

These experiences have drastically changed Spencer’s life. He now works directly for Harmon as one of his assistants. “If someone told me this story, I wouldn’t believe it. I get to see how he makes Community,” Spencer says. And like everyone else in Hollywood, he has big dreams. “I want to use this experience to my advantage and possibly work in television.” Harmon would likely say that good storytelling features characters who don’t remain static but continue to evolve. In that sense, Spencer fits the classical definition of a hero, even if he’s an unlikely one.