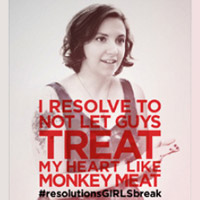 Who would you rather watch: the fictional Hannah Horvath or her real life alter-ego, Lena Dunham? On January 13, you’ll sort of have to pick. That night marks the season 2 debut of Girls, the HBO show about priviliged New York girls self-consciously staggering through their post-college years. It’s also the night of the Golden Globes, which honored Girls with two major nominations: best comedy or musical series and best comedy actress for Dunham.

In the year 2012 you can DVR it all, but both shows have a certain zeitgesty immediacy that demands they be viewed ASAP. We have to wonder: Is this syergistic marketing, savvy counter-programming, or sheer stupidity? You be the judge.