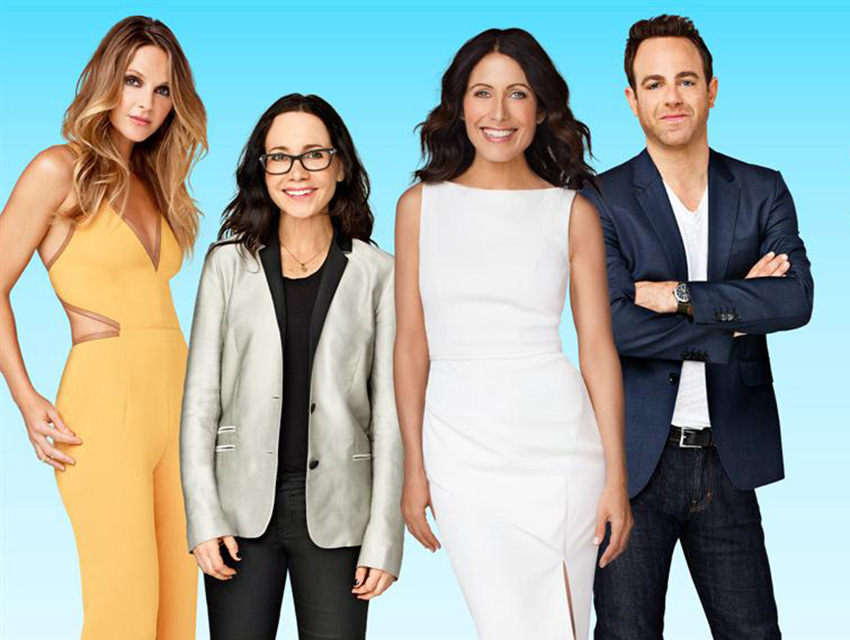 Maybe Bravo has finally run out of reality show concepts. Nah, not possible. But the network has rolled the dice with its first scripted show Girlfriends’ Guide to Divorce. Only one episode in, the dramedy, produced by Buffy the Vampire Slayer’s Marti Noxon, has made quite an impression. Reviews have been mostly positive and some writers have dubbed it the new Sex and the City. But does the show live up to the hype?

Girlfriends’ Guide stars Lisa Edelstein as Abby McCarthy, an L.A.-based self-help guru with a bestselling book series to her credit (loosely based on Vicki Iovine’s Girlfriend’s Guide series). Between her husband, two kids, and banging yoga body, Abby seems to have it all. But like all protagonists, she’s more complicated than meets the eye. That husband of hers? He’s shacking up at the Chateau Marmont with an actress young enough to be his daughter. To be fair, Abby and her husband Jake (Paul Adelstein) are separated, though they hide that fact from most people including their two kids (Jake sneaks home each morning before the children wake up). Abby has a new book coming out and a perfect image to maintain, but it doesn’t take long before she reveals her secret at, of all places, her own book signing. In a very-public meltdown she opens up and basically wishes her husband death.

Enough about Abby and on to the girlfriends of Girlfriends. We have Lyla (Janeane Garofalo), a no-nonsense lawyer who sometimes slips her friends meltdown-inducing pills. She’s serious, snarky, and a tad malicious when it comes to the custody battle with her BDSM-loving ex-husband; she gets him liquored up then reports him for drunk driving. When she’s not plotting her ex’s takedown, she’s Abby’s voice of reason. Just don’t get too attached; Garofalo is leaving the show after six episodes.

Next up is Phoebe (Beau Garrett), a former model and a free spirit, which we know because she wears crop tops, smokes inside clothing stores, and passionately advocates for threesomes. Within the first 15 minutes of the pilot, she’s showing off her post-baby boob job in public. Unlike Abby and Lyla, she’s not much of a career woman, though this might change if she earns enough money prostituting herself to her ex-husband.

If Bravo’s goal is to be taken seriously in the quality-content game, Andy Cohen should give the network his mazel. This is a solid first step. The show is well produced and features solid performances from the female principals. Entertaining from start to finish, it offers a fun girls-night-out sequences as well as high drama; an explosive fight between Abby and Jake is the pilot’s darkest—and best—moment.

Girlfriends’ Guide To Divorce looks promising, but we’re proceeding with caution. So far, the series is lacking in originality. We’ve seen each key plot point, particularly Abby’s turmoil, a million times, and the characters too often rely on clichés. Exhibit A: When Abby confesses she’s not ready to move on from Jake, free-spirited Phoebe responds with “You need to be touched” before planting a wet one on her. But there’s only been one episode, so we’ll give the show the benefit of the doubt. (A sneak peak of a future episode shows Abby explaining to her young son that her vibrator is indeed not a lightsaber—never seen that one before.)

As for those Sex and the City comparisons, only time will tell how similar the shows truly are. Perhaps Phoebe’s a toned-down Samantha and Lyla’s a toned-up Miranda. Abby may be more disgruntled than Carrie, but her guilty pleasure is a cigarette in front of the Laurel Canyon Country Store. That’s totally Carrie-takes-L.A.

The Cast of There Goes the Motherhood, Ranked by How Much We Wish They Had Been Our Moms