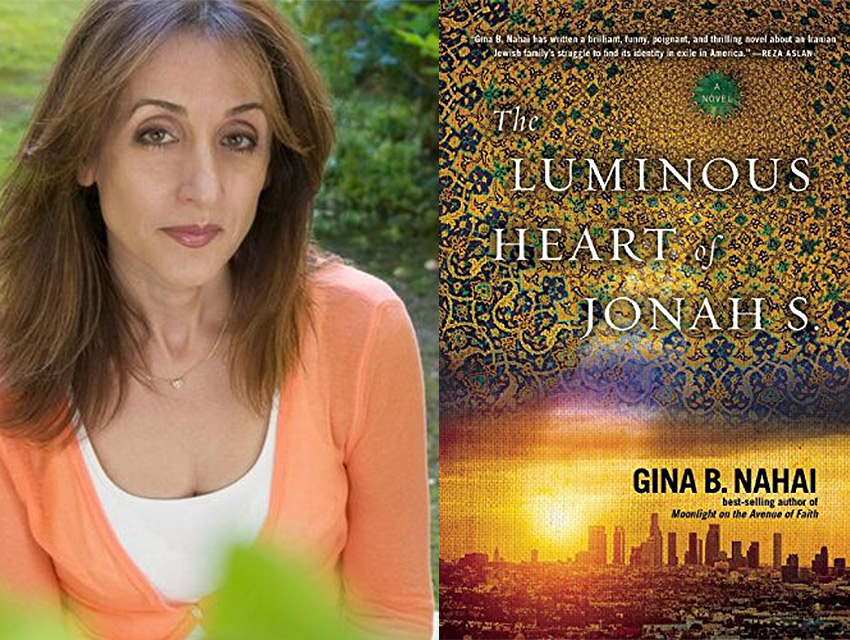 There are now more Iranian Jews living on L.A.’s Westside than anywhere else in the world, including Iran. Angeleno author Gina B. Nahai’s latest novel The Luminous Heart of Jonah S., which is itself a luminous multigenerational saga, tells their story.

Featuring fractured families, fled countries, fortunes lost and gained (by all manner of honest and inventive means), and the past catching up to the present at every turn, the sweeping story centers around a modern day Holmby Hills murder mystery made all the more mysterious after the body of the deceased vanishes.

The author of multiple award-winning novels—and, in the interest of full disclosure, my former graduate school thesis advisor—Nahai is a prominent voice on the experience of the Iranian Jewish community from pre- and post-revolutionary Iran to present day L.A. During a phone call that took place a few days before her book’s October 7th release, Nahai discussed the Iranian diaspora, the power of storytelling, and the immense importance of place.

Can you talk a bit about your own journey from being a child in Iran to now being a writer in Los Angeles?
I was born in Tehran to a Jewish family. Our family was rather colorful, and there were a lot of women on both sides. A lot of them were also quite outspoken, in the sense that most Iranian Jews don’t air their dirty laundry—even to each other. The people in my family, thank God, were less afraid of showing vulnerabilities. So they did speak up and talk about those things that were on their mind. And very often what was on their mind were things that seemed completely trivial at the time, but which, to me, seemed just fabulous.

My parents sent me to boarding school in Lausanne, Switzerland when I was thirteen. And then my family moved to L.A. in 1977, two years before the revolution. I went to UCLA and got an undergraduate and a masters degree in international relations. I went to law school at USC for [laughs] one semester, and then I started writing these stories, though I had no idea what I was doing and had no intention of becoming a writer. I owe so much of the fact that I am a writer to James Ragan—a poet and the director of the [Master of Professional Writing] program at USC when I was a student there—who recruited me, encouraged me, and allowed me to think that being a writer is a viable option as a career.

I happen to know that it’s your belief a novelist should set out to write a book in order to answer some kind of question burning within her. What was the question you sought to answer through The Luminous Heart of Jonah S.?
The question was: what have [Iranian Jews] become as a 3,000 year old culture? What have we become in the more than thirty years since we moved to Los Angeles, and how much of it is the influence of the city itself (because in many ways its culture is different from that of the rest of the country), and to what extent is it just a natural evolution of our old culture? All of the events in the book are based on real events that have taken place. For instance, there have been in the past few years a number of Ponzi schemes that have really devastated the community. And this is a thing that would’ve been unheard of in Iran thirty years ago. Just unheard of. So with that, the question was: how was this possible? But that’s the more plot-oriented question.

The deeper question—which really deals with the theme of past and present catching up with each other—was: is it possible for a new generation to atone for the sins of the old? Or to somehow start anew?

You put a disclaimer at the bottom of your acknowledgements page that says, “Whatever the outcome, my intentions were good.” Can you talk about the ways in which you are worried the book will be perceived within your own community?
[laughs] You saw that? I’m concerned about that, but I’m also concerned about the perception that people outside the Iranian Jewish community might have, or the conclusions they might draw from reading this book.

It’s no secret that Iranians in the United States have a mixed image. Especially in L.A., you’ve got 400-something-thousand Iranians—and by far the majority are Muslim, who’ve always had to fight certain perceptions in the media. So I was very conscious of that. And within the Jewish community—the Iranian Jewish community and the American Jewish community, because at temples and schools and social events they’re mixed—there’s particular sensitivity to what I write. So I guess [some] could feel that you should not talk about any issues. You should keep things within the community because “no matter what you say, it’s going to be misinterpreted by the Americans and they’ll dislike us even more.” Basically, that’s the concern: being disliked even more.

But I’ve been told for years and years [by American readers] that I should write a book about the Iranian Jewish community in L.A., and in particular because there’s this perception that we’re very insular and mysterious. The big challenge was to take a step back and look at it as an outsider might look at it. To see what parts of our story might be dramatically engaging.

Your novels include a good amount of what people call magical realism, and yet these mystical elements are always woven into the fabric of a realistic family story set in a world of real historical action. How do you strike that balance as a writer, and what is it about the magical that interests you?
I was surprised when my first book came out and the reviews and readers talked about magical realism because I didn’t see it as that. In time, I found that a lot of other writers who write “magical realism” also don’t see the writing as anything particularly fantastical.

In my case, I basically recounted what I had heard or witnessed growing up in Iran. For instance, in [my book] Cry of the Peacock, the fact that a character is 114-years-old, I mean there was a person called Peacock and she was supposed to have been 114. She’s my great-grandmother. So, I think there’s a lot more realism in the writing than there is magic, so to speak.

Your book spans multiple countries, characters and generations, and it also touches on—or really, lays into—every conceivable issue of consequence from religion, to politics, to money, to morality, to immigration, to exile, to the idea of legacy. I’m wondering if you set out to take on all of these individual topics, or is it just inevitable that each of them comes up for examination when you’re telling a story this sprawling?
What I wanted to do was to tell the story of Iranian Jews in L.A., but also to tell the story of L.A.—the way I see it and have experienced it. So I think, inevitably, when the story is that large, you end up touching on all of these things. And then once you delve into one, the others sort of surface in the narrative. And all of these layers are partly—well, probably—why it took me seven years to finish.

Nahai will be in conversation with Bob Scheer at Writers Bloc Presents on October 23. Ticket information and parking instructions are available on the event Web site.

Allison K. Gibson is a writer and editor living by the beach in Southern California. Her writing about art, books and design appears in The Millions, L.A. Weekly, The Wirecutter, Lifehacker, Huffington Post Arts, Apartment Therapy, Art Ltd., Beautiful/Decay, Daily Serving, CSQ, and Digital Photographer. She holds a graduate degree in creative writing from USC. Her fiction and poetry appear in Connu and L.A. Weekly. Follow her on Twitter at @allisonkgibson.