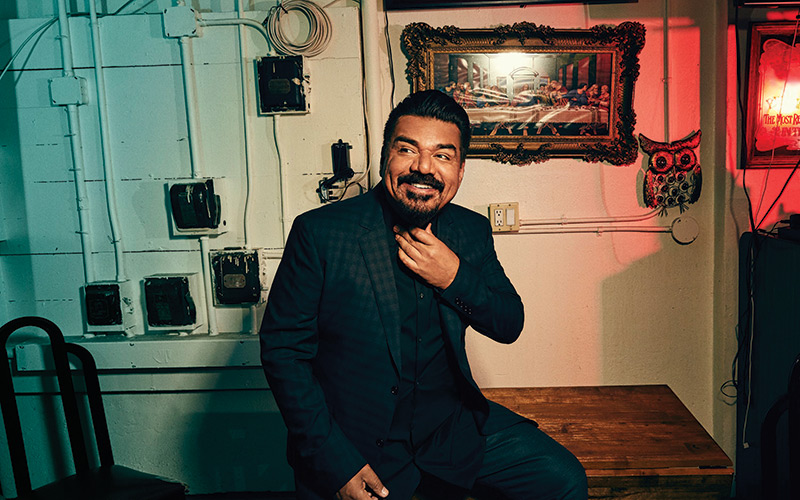 They say all rock stars want to be comedians and all comedians want to be rock stars. Whoever “they” are in this scenario, George Lopez agrees. “I sold flowers on the corner of Winnetka and Nordhoff for two nights when I was 14,” says the Mission Hills-born, Los Feliz-based comedian. “I raised $95, and I spent it on a copy of a Fender Stratocaster.” It didn’t do him much good. “The one thing that has eluded me, besides love, is playing the guitar,” he says. No matter. The 55-year-old has done just fine telling jokes in front of sold-out crowds, which he’s since parlayed into four eponymous TV shows (most recently TV Land’s Lopez). His passions collide at the Playboy Jazz Festival, where on June 10 and 11 he’ll return for his fifth year as master of ceremonies—and maybe his first as a performer. “It is a goal of mine to go out there and do a little intro, but I haven’t run that by Darlene yet,” he says, referring to Darlene Chan, the fest’s longtime producer. “She’s going to say no.” Here Lopez talks his dream jazz quartet and what L.A. would be like if he ran for mayor.

“When I smell weed, I grab the mic and say, ‘There’s something funky in the air!’ That was going to be my slogan for the Jazz Festival.”

Three L.A. comics, dead or alive, you’d start a band with?
Cheech, Eddie Murphy, and Anthony Anderson. Eddie and me on guitar. Cheech on the drums. Anthony Anderson would play the bass, because you always have the funky brother play the bass. We’ll let Cheech sing because he’s smoky with that voice. That would be good—I’ve gotta make some calls.

If your stand-up mic were made of any L.A. food, what would it be?
A glazed twist. As a child, Winchell’s was banned because my grandma thought the doughnuts were too big. I was like, then just give me half! But also—and nobody knows this about me—when I was growing up, I loved raisin bread. I tried to get my grandmother to buy raisin bread, and she never did. So in my refrigerator, I can’t even tell you how many years this goes back, every week there’s Sunmaid raisin bread in there. If Sunmaid was going out of business, I’d probably buy a truckload of their raisin bread and freeze it. Although I don’t freeze bread because that’s cheating. We can’t stop the clock. You shouldn’t be able to stop bread.

You love golf. Non-publicist approved name for your own course?
There are so many clubs with Latino names, like Las Brisas and Los Canyons. So I’d use Las Vergas, which means the penises. Like, “Have you guys played Las Vergas? The holes are long—some are short—and the rough is cut down. Each hole has two sand traps on the side.”

If you built it in L.A. where would you put it? Los Feliz?
I love Los Feliz, but no. I’d want people to go to it. So not Los Feliz. I think I would put it at Wilshire Country Club, because it’s right in the middle of the city. And there’s a tunnel to get from one side to the other.

L.A. drummer you’d hire to hit a rimshot every time you told a joke?
Travis Barker. He gets air when he plays—he leaves the seat. There’s never been a rimshot with elevation. I’d be the first one.

You once said you’d run for mayor of L.A. First ordinance you’d pass?
If I were mayor, I and whoever wanted to join me would steam clean this city like it’s never been cleaned before. Also, parking permits would be eliminated.

Three items you need to survive pilot season in L.A.?
Wipes. And not a wet nap from, like, a barbecue place. You’ll need to freshen up. Then an auxiliary outfit. And I wouldn’t say layers—that’s also cheating. It has to be on a hanger in your car. And sunglasses.

Rock star you’d trust to open for you at the Comedy Store?
Gene Simmons. He’d be a prop comedian. He’d spit fire and blood, and every applause break he’d stick his tongue out.

You wear the same brand of cologne as Elvis. One item you wish you could acquire from a dead musician?
The brown leather pants that Jim Morrison wore at the Hollywood Bowl. I would air them out, and I would wear them during the Jazz Festival.