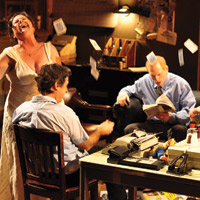 Brooklyn theater troupe Elevator Repair Service gave itself a challenge in 2004: Could it stage The Great Gatsby with actors speaking every word of F. Scott Fitzgerald’s 1925 novel of love and acquisition? “The thinking,” says director John Collins, “was that it was impossible, but out of the failure we’d do something interesting.” They somehow succeeded, and this month the show that has wowed and befuddled audiences around the country comes to Los Angeles.

Gatz, a Jazz Age Mahabharata, dreamily immerses us in the story. It begins in modern times when an office drudge, played by the shape-shifting Scott Shepherd, finds a paperback copy of Fitzgerald’s novel stuck in his Rolodex. As he starts reading it aloud, his dozen coworkers slowly transform into Jay Gatsby, Daisy Buchanan, and the book’s other characters. Soon they’re laughing, fighting, and above all, getting drunk as they reenact the American fable amid desks and file cabinets.

By now Gatz’s actors have learned to cope with the rigors of performing in an eight-hour production with two intermissions and an hour-long dinner break. In Zurich cast members went for a swim in a nearby lake during an interlude—something that will be unavailable to them when they arrive at REDCAT for nine performances starting November 28.

The Play That Supreme Court Justice Antonin Scalia Might Rule Against, Even Though He’s In It