Home Art This 360° Immersive Installation Transports Viewers to Another Dimension 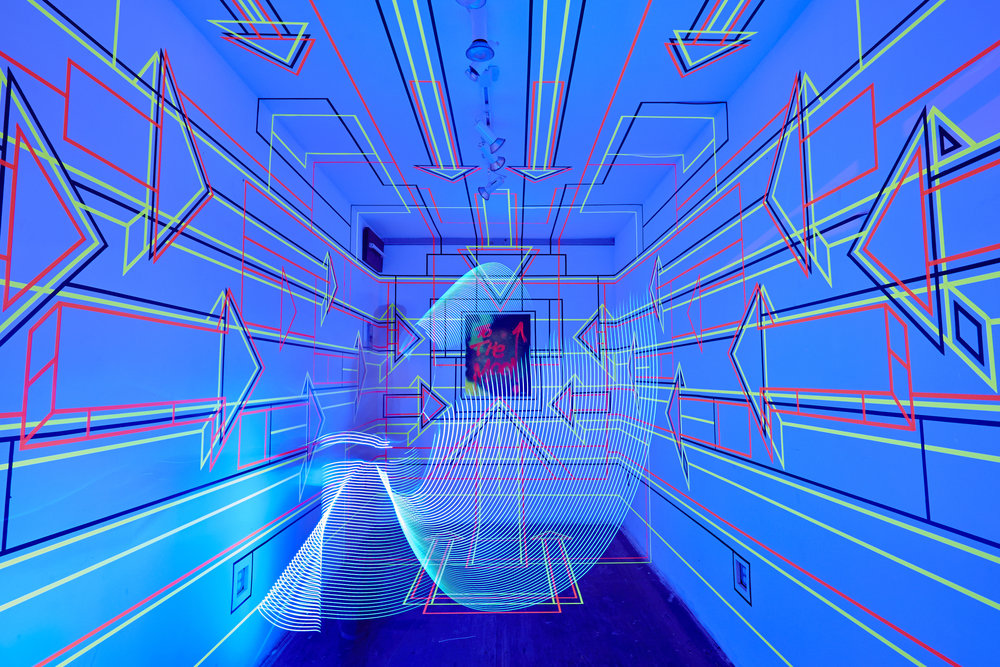 Walking into de Plume Gallery at night is a bit of a trip. The black-lit gallery space, tucked discreetly between a corner liquor store and a bike shop in Hollywood, has been transformed into a scene fit for the latest Blade Runner. The gallery’s first-ever solo exhibition, Gateway to the Moon, is a dizzying display of geometry. A labyrinthine arrangement of taped arrows lines the walls, ceilings, and floor, leaving visitors with a warped sense of space, if not a bit of vertigo.

All the immaculately straight lines and perfect symmetry make meeting Gazoo ToTheMoon, the artist behind the installation, all the more surprising. While his art is calculated and precise, Gazoo is informal, mellow, and refreshingly vague when speaking about his work. He leaves it up to the viewer to glean whatever they want from his pieces.

In fact, Gazoo doesn’t start out with a clear, laid-out vision when he begins the majority of his installations. Instead, he buys a set amount of masking tape, begins with a simple motif or design, and freestyles until the tape runs out. “People always ask me, ‘But how do you know when to stop?’ So when the material is done, I’m done,” he says.

The New York-based artist made a name for himself in 2012 with his trademark “To the Moon^” graffiti tag and geometric tape installations, landing him a space at Refinery 29’s famed 29Rooms in New York. He’s had several solo shows in New York, but Gateway to the Moon marks his West Coast debut. Gazoo says he’s looking forward to familiarizing himself with L.A.’s art scene, where he claims he feels there’s less of a sense of competition among artists and more mental freedom to do whatever you want.

“In L.A., you’re not grouped into a neighborhood scene like other cities. You make your own lane.” he says. “It’s your own vibe.”

What’s next for Gazoo? He says he likes to keeps things unplanned and let things unfold organically, but you can expect more shows from him in New York and a “To The Moon” site where you’ll be able to buy his art prints and other “To The Moon” merchandise.

RELATED: This Group Art Show in Chinatown Has No Art