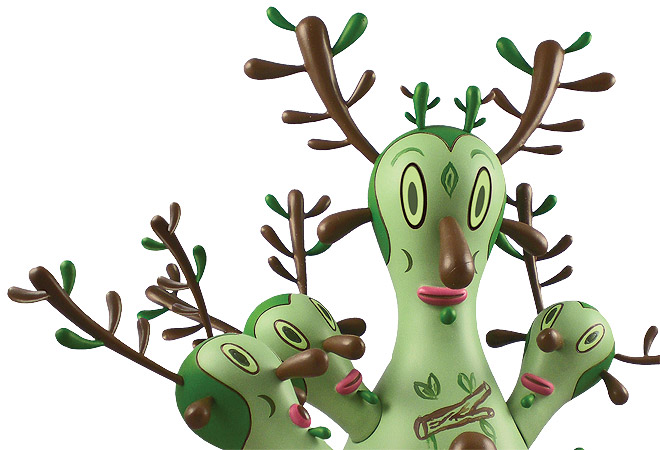 If Gary Baseman has been channeling his hometown all these years, then Los Angeles is a sweet but devilish Hieronymus Bosch landscape peopled by teardrop-shaped characters that are more endearing than threatening. They’ve brought the illustrator, animator, and toy designer great success, which, judging by his first retrospective, he owes to his childhood. Opening next week at the Skirball Cultural Center, The Door Is Always Open is Baseman’s “love letter to my folks and the Fairfax community.” Born to parents who fled modern-day Ukraine after the Holocaust, Baseman was their “American dream baby.” Instead of becoming president, the latchkey kid (his mom, who died in October, worked at Canter’s for 35 years) grabbed a sketchpad and honed an irreverent, kitschy style that jump-started a career in commercial illustration. The democratic, pop culture ethos behind his “pervasive art”—a term Baseman, who is 52, prefers to “pop surrealism,” since it speaks to the medium rather than the content—drives the show. Inspired by his father’s Yiddish-tinged refrain that his son would be forever welcome under his parents’ roof, Baseman has trucked in family photos, 20-odd sketchbooks, a collection of 1930s mannequin heads, and his parents’ bedroom and dining room sets to create a space that evokes his childhood home. In the living room visitors can pore over the Baseman-designed board game Cranium or view episodes of his Emmy-winning cartoon, Teacher’s Pet. By encouraging visitors to doodle on blank pads, he hopes they’ll share his belief that anyone can be an artist. “Art is magical,” Baseman says, “but I don’t believe it’s precious.”