Home Uncategorized Gangnam Style: Will the Next Worldwide Pop Star Come from Korea? 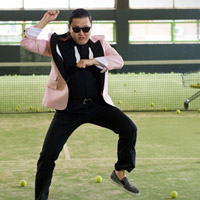 If rapper Psy has anything to say about it: hell, yes. The South Korean hip hop star made a splash at last week’s Video Music Awards, which served as his formal introduction to American audiences. His informal introduction to audiences all around the world came with Gangnam Style, a video that has become a viral sensation since its July release (over 120 million YouTube views and counting).

If we spoke Korean, we’d have a better idea of what the lyrics mean, but if other English language news stories are to be believed, the video simultaneously lionizes and parodies the lifestyles of the rich and famous. Gangnam is a high class district in the South Korean capital, Seoul. In the video, Psy’s trademark move is a strange wide-legged, galloping dance — sort of like a rider trotting along on an invisible steed — that caricatures how the wealthy people of Gangnam spend their days.

According to Korea Times, Psy (real name: Park Jae Sung) is in talks to record an English version of Gangnam Style and recently signed a contract with Island Def Jam Recordings, which reps Justin Bieber. Thanks to the internet, the pace of cross-pollination keeps accelerating and music charts are getting more global all the time.