Home TV The Game of Thrones Season 8 Trailer Packs a Lot of Info—Let’s... 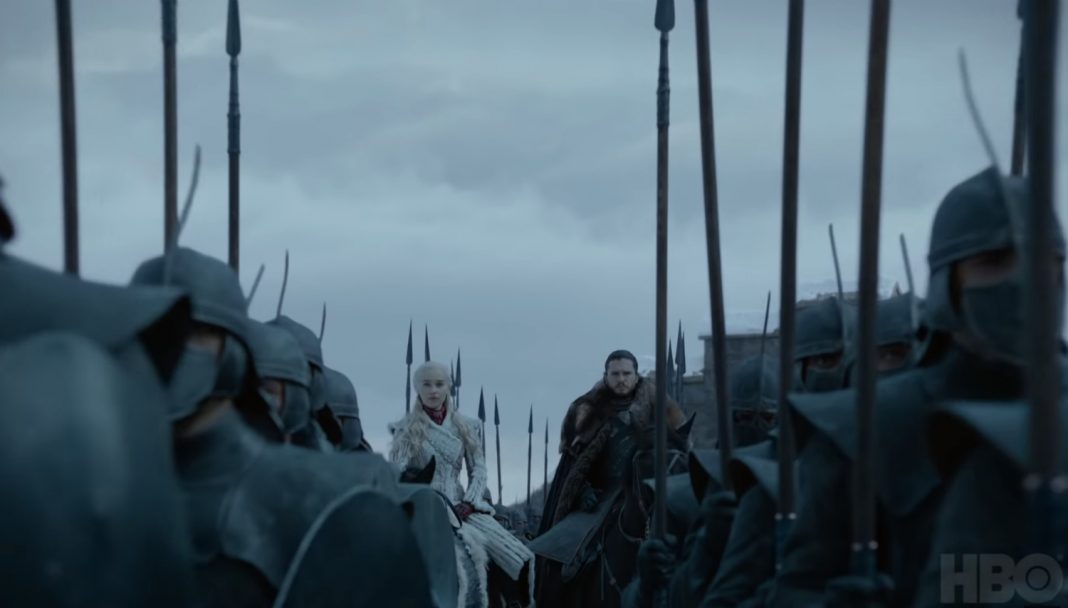 OK, so after weeks of analyzing three-second teasers like they were the Zapruder film, we finally have a full two-minute official Season 8 trailer to unpack.

Here’s what we learned from the trailer and what these scenes may portend for our favorite Westerosi characters. If you’re not caught up, there are spoilers ahead (duh).

Winterfell Is Where It’s At

Everyone appears to be in Winterfell—Arya, Jon, Daenerys, Brienne, Jaimie, Pod, Davos, Sir Jorah. Historically, these trailers contain clips from the entire season, but it does appear as though the bulk of the trailer is made up of shots from the first episode. We see Daenerys and Jon marching with the Unsullied and the Dothraki toward Winterfell. (But we already knew that they would meet Sansa at Winterfell thanks to a blink-and-you’ll-miss-it teaser, which echoed King Robert’s arrival at Winterfell in the first episode of season one, with Sansa bowing to Daenerys saying, “Winterfell is yours”).

Bronn is noticeably absent in the trailer. Where could he be? He was last seen last season in King’s Landing. He’s a sellsword, after all, perhaps he’s been employed by Cersei now? We don’t see Ghost there either. He was last spotted roaming the North.

Cersei, of course, is not at Winterfell, she looks lonely in quiet King’s Landing.

The trailer opens with Arya crying, panting in the dark. It’s reminiscent of when she killed the orphan in Bravos, but this time there’s a look on her face we’ve never seen before—fear. Nothing has ever scared Arya. In the trailer, she runs through the halls of Winterfell, presumably being chased by a White Walker. Her voiceover must come from a scene prior to the chase. We predict she’ll utter the words of her dancing master Syrio Forel and tell death, “not today” as she did while running through the halls of King’s Landing in season one.

The way she handles the dagger and proclaims, “I know death. He’s got many faces. I look forward to seeing this one,” seems to give credence to the theory that Arya will kill the first White Walker, the one who was made by the Children of the Forest, with the Valyrian steel dagger Bran gave her. (This would explain the worried look he gives Arya as he handed the weapon over last season under the weirwood tree). After she kills the first Walker all of the walkers he created will die when he does, one assassin defeats the Night King’s army. We just hope she doesn’t die after accomplishing the task.

Arya Will Go to Battle

Perhaps the Clegane Bowl will happen? Or maybe this shot, with flickering flames behind Sandor is there simply to show that the Hound, who has a deep-rooted fear of fire, will find himself surrounded by it, as it’s one of the ways to effectively kill his enemies. Will the Hound battle his fear as he fights the undead, or will the dog tuck tail and run again, like he did from the Battle of Blackwater Bay?

Jon and Dany will likely ride the dragons. The way this is shot, it looks as if they are going to mount the fire breathing creatures. Two Targaryens, two dragons—Dany has logged plenty of flight time with her favorite winged child, Drogon. And the other, Rhaegal, was named after her brother, Jon’s father. I think this is a given.

Despite the voiceover telling Jon he is where he belongs while on screen a sweeping shot shows King’s Landing, that VO is likely going to happen later in the season, because in a few clips in the trailer there are some tender looks exchanged between the former King in the North and the Mother of Dragons, including an especially emotional one in the crypts of Winterfell, no doubt at his mother Lyanna’s tomb.

The Army of Mercenaries Is Coming to Cersei’s Aid

We see the hired black ops army known as the Gold Company aboard Yuron Greyjoy’s fleet. Cersei is moving ahead with the plan she told Jaimie about last season, to take control of the seven kingdoms while everyone is battling the army of the dead.

Cersei Will Likely Have the Upper Hand for a While

The Queen has a smug look on her face in each scene, even while Quyburn looks on at her concerned. Quyburn isn’t troubled by much. He doesn’t even flinch at a severed head or an animated dead man’s wriggling hand.

Tormund and Beric Dondarrian Survived the Fall of the Wall

We see them joined by Edd at what looks like Winterfell, not Castle Black.

Gendry Is Leading Blacksmiths at Winterfell

Gendry is going to make Valyrian steel, which as we all know is one of three ways to kill White Walkers. Tywin said in season four, when he reworked Ned Stark’s Valyrian steel sword, Ice, into two swords (Oathkeeper with Brienne of Tarth and Widow’s Wail with Jaimie Lannister) that there were only two smiths in Westeros who could work with Valerian steel. Tobho Mott was one of them and Gendry was his apprentice.

The White Walkers Will Descend on Winterfell

We see the hoofs of a White’s horse touch down just outside Winterfell’s gates. We see an army of Northerners lining up for battle. There will be a battle. Apparently “the Battle For Winterfell” (or so it’s being called) will be the longest battle scene in film or television history, just barely beating out “The Battle for Helm’s Deep” in Lord of The Rings: The Two Towers at 42 consecutive minutes. And it’s been said that this battle will take place during episode three, leaving two more episodes for whoever survives to defeat Cersei and her allies.

RELATED: 5 Westerosi Looks You Can Rock This Fall