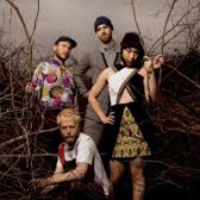 FYF Fest has seen its share of changes and growth since launching in 2004; it has been held at different venues, showcased different lineups, and grown by leaps and bounds. Originally based at various Echo Park indie institutions (the Echo, Sea Level Records, Jensen Rec Center), the festival soon outgrew those digs and has been held at the Los Angeles State Historic Park since 2011. This year while the Chinatown park is being renovated, FYF Fest will move indoors and outdoors to the LA Sports Arena & Exposition Park on August 23-24.

What started out as a festival built on local talent now boasts bands with worldwide fanbases (many of them have played the Holy Grail of all music festivals, Coachella). With more than 50 bands, this year’s lineup, announced on Friday, continues the trend. Here are our must-see bands.

Desert Daze, the Hidden Gem Among Music Festivals, Just Got Even Cooler