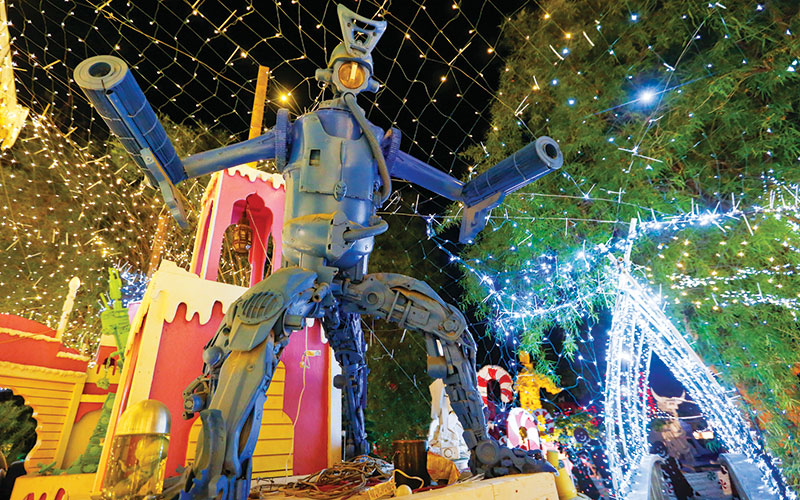 When I moved to L.A. from Michigan, I was happy to say good-bye to Midwest winters. But at holiday time I felt homesick. Even as local DJs slipped “Jingle Bells” into their rotations and a gas station near my house placed $1.99 dreidels by the register, something was missing. I hit a few of L.A.’s holiday light displays—the Los Angeles Zoo, the Grove, the Balian House—but no matter the vibe (lasers, fake snow, and angel figurines, respectively), it felt as if California was trying to replicate the charms of far-off rituals rather than lean into its eccentric West Coast self.

A few years ago my friend Paul offered a solution: Robolights. But to see them, we’d have to drive to Palm Springs. Arriving in the desert community’s Movie Colony neighborhood, we found a stately mansion surrounded by a vast maze of robot sculptures the size of dinosaurs—all wrapped in millions of sparkling lights. From cyborg reindeer to mutant Christmas elves, each creature had a distinct personality, ranging from the whimsical to the frightening, and all were fashioned from derelict washing machines, toasters, television sets, even tanks. It’s a thrilling, at times dystopian, vision, like Tron as imagined by a demented Dr. Seuss.

Robolights sprang from the mind of artist Kenny Irwin Jr. 30 years ago, when he was just 12. He now spends 320 days a year expanding the installation. When Paul and I were there, we glimpsed Irwin on his hands and knees beside the swimming pool, gluing scrap metal to the face of what looked like an alien Santa. He nodded, smiled courteously, and returned to his work. Irwin has soaked Christmas in hallucinogenic eggnog and created his own trippy, Mad Max-style desert holiday, which feels transporting, wholly original, and enormously energizing. I go back every year.