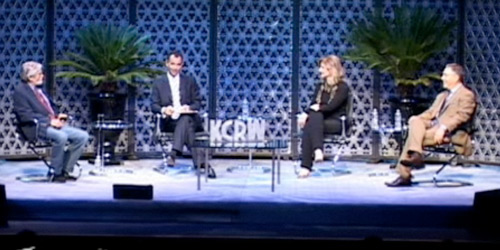 KCRW presented their 13-year old weekly special Left, Right & Center live at the Broad Stage in Santa Monica on Sunday evening, and, after a few weeks of revisiting what constitutes news, it was nice to slink into a chair and hear a good old multi-sided discussion.

Sunday’s discussion, which was sold-out and not inexpensive to attend, focused on the economy, health care, and the war in Afghanistan—but Balloon Boy, the intersection of Hollywood and Vine, marijuana, and political “diddling” came up too. While Scheer, Blankley, Huffington, and Miller articulated different positions on everything from the importance of having a public option in health care reform to the moral implications of the economic stimulus package, they expressed a shared concern over President Obama’s desire to “be all things to all people.” They agreed that compromising too much on public policy can be too, well, compromising to be effective, so it seems ironic that most of the questions posed by the audience in the too-brief Q&A period at the end of the program were directed at Miller, who sits at the ideological “Center” of the panel. Maybe the middle of the road is somewhere we can meet, for now, if only to keep the conversation going.

Robert Scheer: “I think it’s great to have a big brain in the White House but unfortunately that is not sufficient… I want Obama the community organizer.”

Tony Blankley: “We should forget about the moral winners and losers and the goats and decide rationally if possible what makes American competitive, which I happen to think tends to be a quite free market and low taxes and less regulation.”

Arianna Huffington: “People feel that the fundamental values of fair play at the heart of American democracy are no longer operational. That basically right now there is the sense that the fix is in, that if you are elite, somehow everything works out okay for you.”

AH: “There isn’t going to be real competition without an alternative [public option]… It’s an option without which there is no reform, really.”

TB: “I’m very cheerful. I did predict, and I think that the democrats will get largely what they want… I think the system won’t work, of course.”

TB: “The problem with the Swiss model, and why it won’t work here, is because it works in Switzerland because it’s being run by the Swiss. They run everything well.”

RS: “I think we’re ready for a little socialized medicine.”

On the war in Afghanistan:

RS: “You’re talking about nation building in the most bizarre place in the world to build one.”

TB: “Obama could make two good decisions: He can decide to get the hell out, or he can decide to commit and make a real effort of it, and I fear he is going to do the one in the middle.”

AH: “This is not a Left/Right issue… Why are we there?… How about Sudan? How about Darfur?”