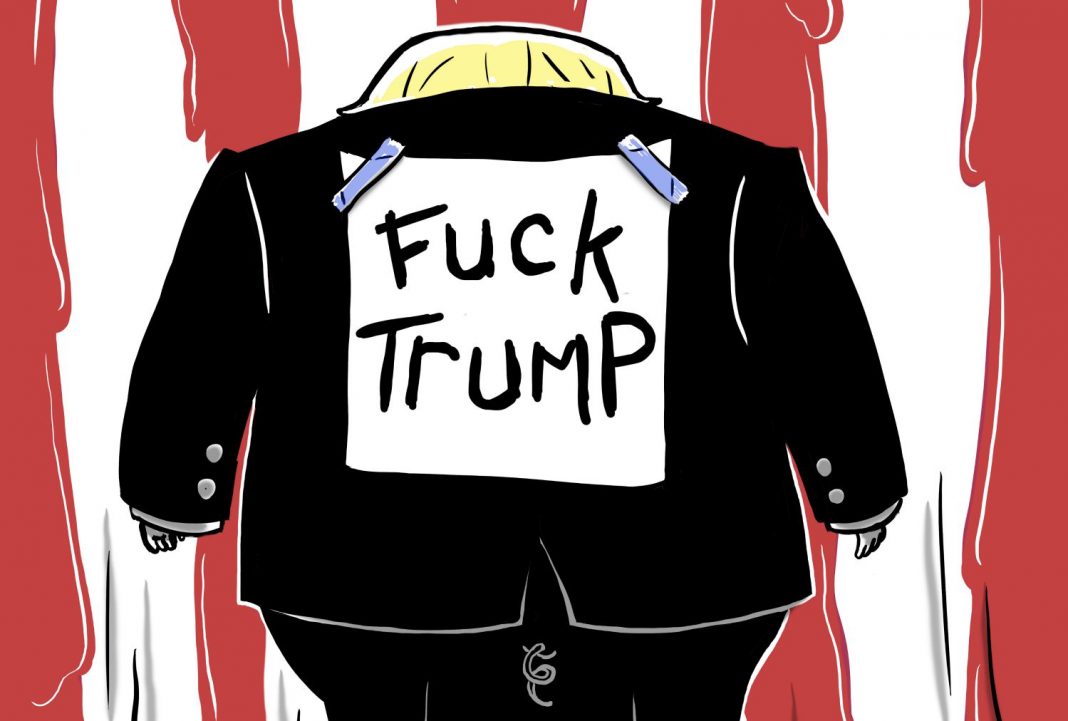 On Sunday, June 14, the Echo Park-based creative production studio and art gallery iam8bit launched fucktrump.art, a hybrid virtual exhibition and protest where all of the works read “Fuck Trump” and are available to download for free as web and print resolution files so that anyone can share the message online or IRL.

The date of the launch was significant—it was Donald Trump’s birthday and Flag Day, as well as a day often used to celebrate LGBTQ+ Pride—and the message was strong. Jon M. Gibson and Amanda White, co-founders of iam8bit, describe it as a “primal scream.”

“It’s like punctuation for us at this point,” says White of the phrase “Fuck Trump,” adding that their hope is for “everyone who disagrees with the administration to be comfortable screaming it at the top of their lungs.”

Over the past 15 years of running iam8bit, Gibson and White have built a large network of artists that they work with on various projects and showcase in their gallery shows. On June 4, the business partners, long frustrated by the Trump administration and galvanized by the Black Lives Matter protests, began inviting artists to participate in the “Fuck Trump” campaign and those artists, in turn, spread the message through their networks. By the time the site launched, they had nearly 200 people commit to creating a piece of “Fuck Trump” art.

“It’s one thing to make political art for yourself and put it out there, but by yourself, it doesn’t have the same impact as when hundreds of artists all come together and create art,” says Jude Buffum, a Philadelphia-based illustrator who frequently works in a style that recalls retro video games and has long worked with iam8bit. “I knew iam8bit was really going to mobilize a lot of really talented artists, a lot of really inspired and smart artists, to work on this.”

The sheer amount of people involved is an important part of the campaign. “There’s this inherent fear that people have associated to speaking out that is really disconcerting for us,” says Gibson. “That’s why we wanted to at least provide a platform and an encouraging environment to allow people to feel pretty safe doing it. Not to say that we can eliminate all the trolls and the bots and the negativity in the world, but if we all go together, it’s meaningful. That’s why mass protests are so powerful.”

Also integral to the campaign is the logo, with a middle finger thrust up in the center of the U in Trump. It was designed by L.A.-based artist Jango Snow, who is also a graphic designer for iam8bit. “As I was working on this, I kept thinking about how we live in an age of social media where everything is taken, stolen and then repurposed as memes or even worse,” says Snow. To try and prevent the design from being altered, Snow visually integrated the message into Trump’s name.

There’s a criteria for the work artists submit. The color palette is red, white and blue, although shades of black and gray are also allowed. The phrase “Fuck Trump,” be it in English or another language, needs to appear in the piece. Artists are also asked to avoid common caricatures of Trump and to submit the works following both the web and print resolution dimensions. The styles represented throughout the online gallery are varied. Some made simpler designs, well-suited for protest signs. Others created more detailed illustrations. Some made general statements, others tapped into specific events.

Aaron and Samantha Becker, twin siblings who are based in Los Angeles, contributed very different pieces to the project. Aaron, director of the Echo Park-based production studio Filmograph, made two works, one of which plays on the president’s signature—”It looks like an EKG,” he says—and reads “Fuck Trump.” Samantha, who is primarily a speechwriter, played on the image of a Bible, with a cross used as the T. That was a reference to Trump posing with a Bible after tear-gassing protesters. “The entire thing was one of the most aggressive and frightening things I’ve ever seen done by a president,” she says. 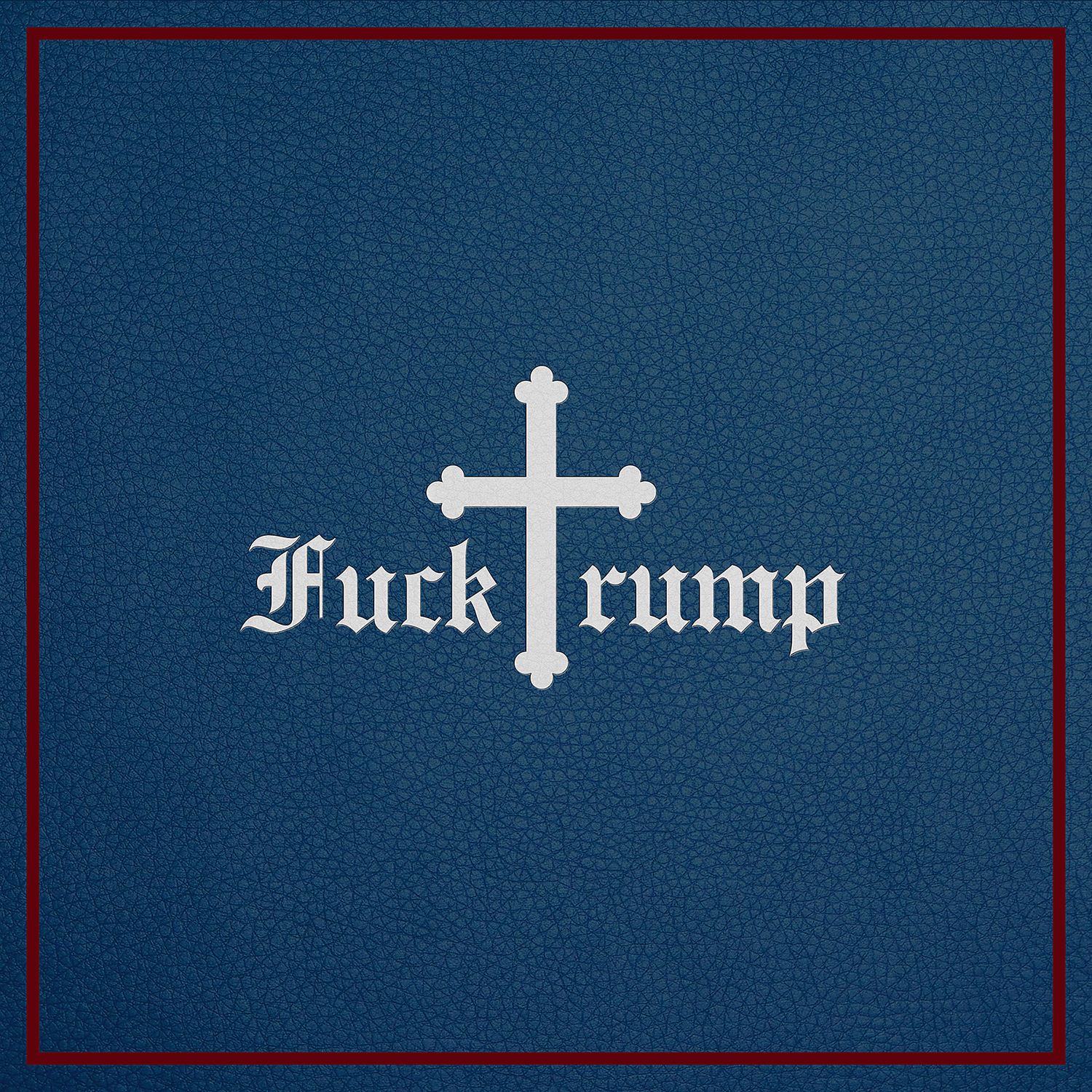 For some artists, this was an opportunity to create more overtly political artwork than they normally do. Lee Petty, a San Jose-based art director in the video game industry, referenced both police brutality, as well as ICE and the detainment of children at the U.S. border. “As an artist, your living is dependent on your work, so most of the stuff you generate, you hold the copyright. You’re trying to make a living, pay the rent,” says Petty, adding that this project is a way to “give back” and maybe help spark more conversation and advocacy.

While the art is certainly attention-grabbing, there’s more to this campaign than the images. The website also provides voter registration links, as well as links to donate to the organizations Spread the Vote, Brennan Center for Justice, Creative Reaction Lab, and Women of Color in the Arts.

Artists are invited to continue submitting works following the guidelines on the website. “This is not a one-and-done sort of scenario,” says Gibson. They plan to continue with the campaign until Trump is out of the White House.

Moreover, Gibson says they hope other companies will become more politically active. “We would encourage other companies who have a platform to speak out and get political because it’s not actually political anymore. It’s about human rights,” says Gibson. “Democracy is being threatened and this isn’t about sitting by and trying not to lose your customer base. This is about speaking out as much as you can with your platform.”