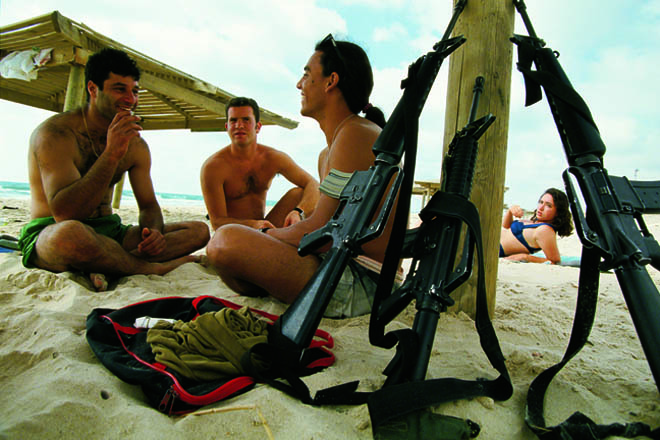 The image of three shirtless young men lounging on the beach with a bikini-clad woman in the background might have been another vacation snap were it not for the assault rifles resting within arm’s reach. “There was that tension,” says photographer Alexandra Avakian. “Even though they seem relaxed, they could be called upon to defend themselves at any moment.”

Like her subjects, Israeli Navy personnel, Avakian wasn’t working that day—but she was always on duty. Shot in 1994 in Gaza, the image is among 150 from more than 50 countries to be featured in War/Photography: Images of Armed Conflict and Its Aftermath, an exhibition opening on March 23 at the Annenberg Space for Photography. With images both recognizable—Eddie Adams’s 1968 picture of a Viet Cong prisoner about to be executed on a Saigon street and Alfred Eisenstaedt’s 1945 glimpse of a sailor smooching a girl in Times Square—and completely unfamiliar, the show illuminates not just the nature of human conflict but the role of those documenting it.

Avakian, who attended Crossroads and Santa Monica High School and later spent a decade photographing trouble spots in Haiti, Somalia, the Soviet Union, and the Middle East, says, “It was something that I was really on fire with—the desire to photograph people fighting for freedom. It didn’t even matter what the ideology was. I was interested in the human spirit.”