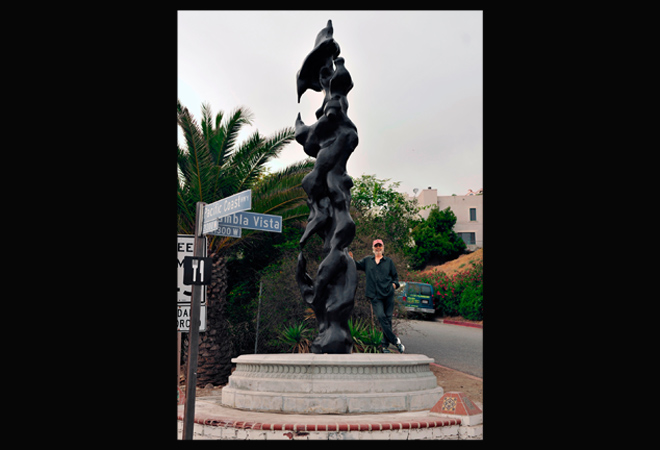 After winning nine Grammys and performing for President Obama, you might think that Herb Alpert’s career had reached its climax. This week, the musician and native Angeleno will hit another artistic high: snagging Malibu’s first permanent public art exhibition.

Most famous for anchoring the Tijuana Brass Band, writing several hit songs in the late ’50s, founding A&M Records, discovering the Carpenters, and shepherding a host of other musical talents, Alpert is also a well respected sculptor and painter. His new 17-foot tall bronze totem “Freedom” can be seen at the corner of PCH and Rambla Vista Street in Malibu.

The piece is dedicated to the Chumash Indians, a tribe that lived on much of the land that now comprises Central and Southern California, including the area where Alpert grew up.  This totem was constructed as free-formed shape to encourage viewers to make individual sense of its meaning.

Although it was erected in July of 2013, the totem will be honored this Friday (February 14) with the unveiling of a brand new dedication plaque. Friday afternoon’s festivities will include Chumash dance performances as well as musical samplings from students of the Herb Alpert School of Music at UCLA and CalArts. The festivities will take place beginning at noon at La Costa Mission Restaurant adjacent to the totem installation.

Like what you see and want to find more of Alpert’s totem work? “Black Totems” can be viewed on the corner of Olympic and 26th street in Santa Monica.