Home Uncategorized From the Dream-Stuffed Briefcase of Abraham F. Frankenstein 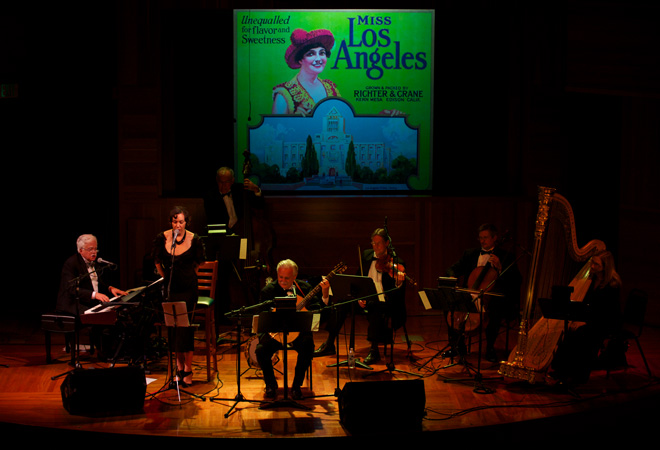 At the Central Library’s Mark Taper Auditorium Saturday night, composer/pianist Van Dyke Parks and music historian Josh Kun referred to the craft of songwriting as no less than “the high math of the heart.” So what to make of both men assembling a band to pay tribute to music that—by Kun’s own admission—was written for one purpose: To sell real estate?

Based on the sheet music collection of the Los Angeles Public Library, which Kun helped organize into a sumptuous coffee table book, Songs in the Key of Los Angeles creates a travelogue of the Big Orange through nearly 100 pieces of sheet music; the musical program—a special program of the Library Foundation of Los Angeles—was as deceptively guileless as the dreams of those who traveled west to, as the line goes, “sing a song of golden California.” They were beckoned in part by tunes composed to sell them the city and the dream, commercial jingles disguised as genteel popcraft and published in sheet-music booklets with stunning covers, and disseminated by a thousand hustling, floppy fedora-wearing sheet-music salesmen. “This was music a business,” Kun told the audience. “In New York, people wrote sheet music to sell songs; in Los Angeles, people wrote sheet music to sell the city.”

The seven piece tuxedo-clad ensemble that performed selections from the Library’s collection brought such confectionary airs to life, from the parlor lament of “Ramona” (based on Helen Hunt Jackson’s hit 1884 novel that celebrated by L.A.’s early Caucasian boosters like Charles Fletcher Lummis and Harrison Gray Otis) and the strings-and-banjo-driven ballroom waltz of “Avalon” to the corny, straw-boater-and-spats positivism of “San Fernando Valley” and “Home In Pasadena” (“Settle down and build a fence / The future here’s the present tense!”). The standout was the Al Jolson-meets-Eddie Cantor vocals of guitarist/banjoist John Stanford Reynolds, whose airy tenor could have been coming out of a Victor V phonograph horn in someone’s verdant, citrus-adorned backyard in 1927.

Kun’s between-song recitations both undercut the too-good-to-be-truisms of the songs—like relating a quote from Leon René, the African-American composer of “When the Swallows Come Back to Capistrano” about the song’s true meaning: the impoverished René wondering aloud one day to his wife, “Maybe when the swallows come back from Capistrano, I’ll get my breakfast.” Kun also took pains to relate the competitive Yankee spirit that drove the sheet music publishing industry in L.A., whose pioneers simultaneously broke off from the East Coast domination of Tin Pan Alley while using its successes as a blueprint for their own. He recalled imagined encounters with Abraham F. Frankenstein, a cornetist from Illinois who led L.A.’s first permanent orchestra at the Orpheum Theatre and wrote the state anthem “I Love You California,” and Albert Bartlett, a Brit who led the Los Angeles 7th Regiment Band and opened a flagship music shop downtown in 1881.

As the bandleader and arranger, Van Dyke Parks resembled a courtly, bantam-sized Southern lawyer in black suit and polka-dotted bow tie. A distinctive composer of alliterative, pun-filled, often self-consciously “clever” lyrics (he used the word “protectorate” while addressing the audience), Parks’ own music reflects the influence of these lush snapshots of Californiana. Following Kun’s comparison between the ornate sheet-music lithographs projected behind the stage and the Edenic hues of classic California orange-crate art, Parks led the band through the exceedingly strange and wonderful tune “Orange Crate Art” from his 1995 collaboration with Beach Boys auteur Brian Wilson.

On Randy Newman’s dark, acidic “Vine Street,” Parks was joined on harmony by singer Inara George, who looked thrilled to be there but sadly was not given a showcase for her lovely voice until the closing song, “California Here I Come.” This seemed peculiar. If anything, George’s presence—she is the daughter of the late great SoCal acid-country icon Lowell George and, like her dad, has collaborated with Parks—represented the continuation of the century-old practice of using music to navigate the L.A. we’ve all inherited. As Kun noted at the evening’s end: “Los Angeles is an infinity of sound, but how does one listen to the infinite?”