Kylie Jenner: Reality television star, cosmetics mogul, America’s influencer in chief. Now add “alleged climate criminal” to the list. The new designation comes hot on the heels of a public-relations crisis for the multimillionaire and youngest adult member of the Kardashian-Jenner clan that is spreading to other celebrities of staggering wealth amid a surge in private-jet ownership. ¶ As with many dustups involving the first family of Calabasas, it all began with an ill-advised social-media post. “You wanna take mine or yours?” Jenner teased in the caption of a photograph published to her Instagram feed on July 15 depicting the star wrapped in an embrace with her partner, hip-hop artist Travis Scott. In the photo, the couple was flanked by a pair of private jets—her $72 million Bombardier 6500 Global and his $72 million Embraer ERJ-190—gleaming in the high-summer San Fernando Valley sun.

Outrage reverberated instantly across social media. The post was criticized not only for its obvious insensitivity to the woes plaguing Americans facing ballooning costs at the gas pump and airline counter but also because private jets, by producing greater amounts of atmospheric carbon dioxide per passenger, are decidedly bad for the environment.

According to Transport & Environment, a Brussels-based European NGO, private jets pollute five to 14 times more than commercial flights per passenger and 50 times more than high-speed rail. While private-jet travel accounts for a fraction of international and domestic flights annually, that fraction is growing. Compared with pre-pandemic levels, commercial airline traffic remains down 23 percent but chartered and private aviation is up 25 percent.

The furor over Jenner’s post had scarcely subsided when an unusual flight plan surfaced—and made everything so much worse.

According to @CelebJets, an automated Twitter account that tracks flights of celebrity-owned private aircraft based on transponder data and tail-fin markings, the day of Jenner’s defiantly braggadocious post, she was purportedly fresh off a flight that lasted just 17 minutes—from Van Nuys Airport to the Ventura County town of Camarillo. It is estimated that trip pumped about one ton of carbon dioxide into the atmosphere and could have been driven in 40 minutes at a fraction of the emissions. Social-media users excoriated the Kylie Cosmetics founder, worth about $600 million, for her “absolute disregard for the planet,” deeming her a “full-time climate criminal.” (Big sister Kim

Kardashian’s 23-minute jaunt from San Diego to Camarillo earlier this summer in her Gulfstream jet produced about three tons of carbon dioxide emissions.)

The backlash over Jenner’s micro-flight was still climbing when the U.K. sustainability marketing firm Yard released research that ranked the top private-jet polluters. According to Yard’s data, Taylor Swift is the world champion carbon emitter, thanks to heavy travel on her Dassault Falcon 900 jet. (She sold a second jet, a smaller Falcon 50 purchased in 2012, earlier this year, according to TMZ.)

Yard estimates that Swift produced more than 8,293 tons from 170 flights this year alone. And she’s not even on tour. (In a statement, a representative for Swift said that the singer’s jet is often loaned out and “to attribute most or all of these trips to her is blatantly incorrect.”)

Also on Yard’s Top 10 were Tesla CEO Elon Musk, rappers Jay-Z and Drake, Mark Wahlberg, Steven Spielberg, boxer Floyd Mayweather, and country-music star Blake Shelton, all of whom used private jets to travel distances under one hour by air in June and July.

At least twice in the last year, Wahlberg’s jet has flown the roughly 40-minute route from Van Nuys to Las Vegas, and vice versa, releasing about four tons of carbon dioxide into the atmosphere. That’s roughly the same level of emissions produced by the average individual in a full year. Wahlberg raised hackles in Ireland after taking a 23-minute private flight from Dublin to nearby Shannon to play golf at the renowned Adare Manor course.

Drake has come under fire for an 18-minute private-jet flight in June, from Hamilton, Ontario, to Toronto—a 38-mile journey. The trip produced about five times the emissions of Jenner’s 17-minute July hop, or roughly four tons of carbon dioxide.

Some of these trips can be attributed to flying the planes to maintenance facilities or nearby airports for repositioning for longer flights. “This is just them moving planes to whatever airport they are being stored at,” Drake wrote on Instagram in response to the outcry over his intra-Ontario flights. “Nobody takes that flight.”

Of course, regardless of whether a five-foot-six, 25-year-old cosmetics entrepreneur or a six-foot-tall Canadian child-actor-turned-rapper was present on these “logistical” flights, the emissions produced would be roughly equivalent. 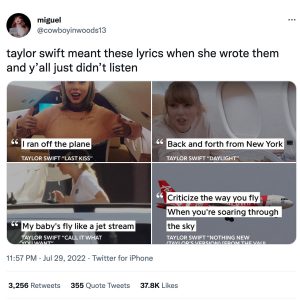 Perhaps wary of the reputational liabilities of flying private, some celebrities have started to cover their tracks. Kardashian’s Gulfstream G650ER, custom built from scratch with a cabin by star interior designers Waldo Fernandez and Tommy Clements at an estimated cost of $150 million, is registered to Noel Air LLC. According to Jalopnik, Swift’s Falcon 900, tail number N898TS—thought to reference her birth year (1989), the number of No. 1 singles she’d had when she bought the jet (8), and her initials (TS)—is registered to SATA, LLC, which shares the same address as Swift’s 13 Management company in Nashville.

Hollywood studios have likewise taken to using shell companies to conceal the existence of their business jets. “Disney has several top-of-the-line Gulfstreams registered under Earth Star, Inc.,” says @Celebjets’s Jack Sweeney, a sophomore at the University of Central Florida, who founded the website and designed its tracking algorithm. Netflix obscures the ownership of its King Air turboprops by registering them with a large trust company, although a few pilots have spoiled the ruse by listing the streamer as their employer on LinkedIn.

“I think it’s important for people to know that celebrities are doing this, to see the environmental impact,” says Sweeney, who rocketed to internet stardom earlier this year when he turned down $5,000 from Elon Musk to stop tracking Musk’s flights. According to Sweeney, Musk blocked him on Twitter after balking at Sweeney’s counteroffer of $50,000. The Tesla CEO’s trips remain well documented on the @ElonJet Twitter account, devoted solely to tracking Musk’s private-jet movements.

Musk, who, according to Fortune, is scheduled to take delivery of a state-of-the-art, $80 million Gulfstream G700 next year after laying off ten percent of Tesla’s workforce, has come under scrutiny, less so for the brevity of his trips—although some have been reported to be as short as ten minutes—and more for their frequency. Between July 21 and July 27, Musk’s current Gulfstream traveled from Long Beach to Brownsville, Texas; Brownsville to Austin, Texas; Austin to San Jose; and San Jose back to Austin. (Tesla is headquartered in Austin as of December of last year but retains a sizable footprint in Silicon Valley.) Over the course of that week, Musk’s jet burned tens of thousands of gallons of jet fuel. The argument for Musk’s frequent private travel is that, given Tesla’s disparate centers of operations, he is often needed in two and sometimes three places at once. Whether the on-demand business genius of one man is worth the damage to the environment it incurs is another question. 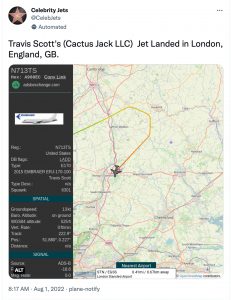 Actors, athletes, tech moguls, and influencers aren’t the only ones indulging in the toxic convenience of private air travel. Even billionaires who make a public show of donating some portion of their fortunes to fighting climate change have a blind spot when it comes to flying private. Bill Gates, author of How to Avoid a Climate Disaster, has gone on record describing his regular private-jet usage as a “guilty pleasure.” Gates’s personal air force includes two Gulfstream G650s and two Bombardier Challenger 350s.

Ultimately, status is likely the chief impetus for owning an environment-thrashing, nine-figure private jet (or two), especially in Los Angeles, where true wealth can be hard to discern. These days, with the median price of a home in L.A. cresting $657 per square foot, even the legitimately moneyed struggle to showcase their wealth with real estate. But while the traditional signifiers of affluence have deteriorated as inflation presses its foot to the accelerator, one constant remains: private air travel is the height, literally and figuratively, of luxury.

Which could explain the advent of the private-jet selfie, which the Kardashian-Jenners have refined to performance art. Family members’ feeds are riddled with shots of the sisters lounging in plush recliners, gazing wistfully out round windows at the pink clouds below, which in turn inspires private-jet envy among the lower castes. Twitter user @MaisonMelissa revealed a company located in downtown L.A. that, for $64 an hour, rents a replica of a private jet interior for photo shoots. “I just found out L.A. [Instagram] girlies are using studio sets that look like private jets for their Instagram pics,” she wrote. Influencers subsequently flocked to the warehouse to pose in white-pleather recliners, bright studio lights shining through portholes to give the impression of midflight splendor.

If such aspirations can exist so widely and uncritically in the face of a 24-hour, headline-dominating climate crisis, the real question becomes: what will it take for the message to sink in? Because doing it for the ’gram, as the kids say, might just cook us alive.

As Twitter Trial Looms, Elon Musk Offers to Buy at His Original Price

Investors Are Not Psyched for Elon Musk’s ‘Optimus’ Humanoid Robot