Home Music From Amy Winehouse to the Ramones, These are the Best Songs from... 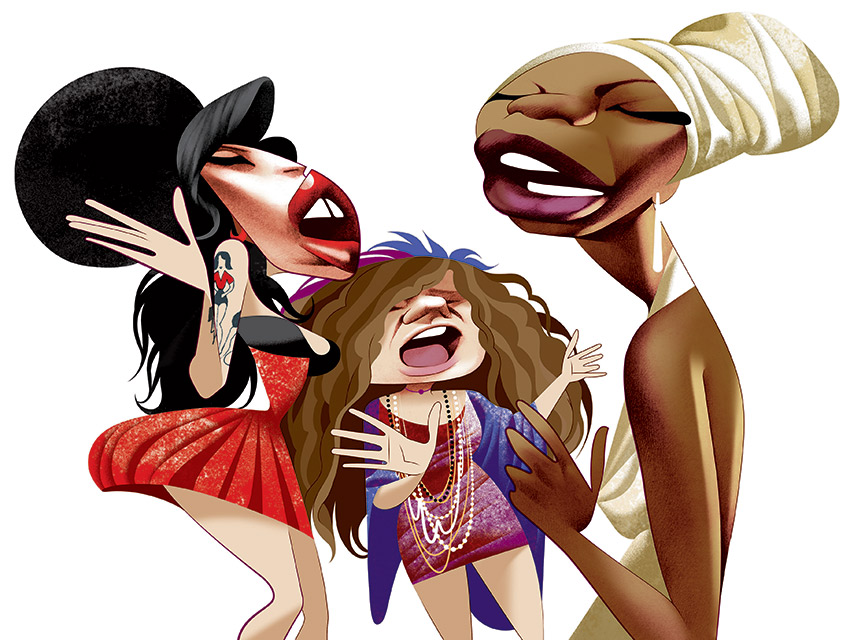 In Cameron Crowe’s new Showtime series, Roadies—a rock and roll His Girl Friday with Luke Wilson and Carla Gugino as concert managers—the crew sets up the stage for the night’s performance to a designated “Song of the Day.” Following on the heels of HBO’s flawed but irresistible Vinyl, Roadies is the latest in a wave of TV shows and movies about music, from Sing Street to the Kurt Cobain documentary Montage of Heck. If the truth is that, at least since the 1960s, visual media rarely have known what to make of music, what we’ve seen lately has provided nothing less than a brief history of popular Western music, broadcasting across the Cinerama of your windshield.

Here is a vidiot’s summer playlist, “13 Songs of the Week.”

Along with Irving Berlin’s “White Christmas” and Paul McCartney’s “Yesterday,” this is one of the most covered songs of all time, so ubiquitous, with more than 30,000 versions over the decades, that you don’t believe it’s possible to hear it anew—until you hear this. Joplin, the subject of last December’s doc Janis: Little Girl Blue, recorded “Summertime” in the spring of 1968, backed by San Francisco’s psychedelic Big Brother and the Holding Company, her opening notes like the wail of a wildcat. Notwithstanding her occasional tendency to vocal overkill in other work, Joplin delivers one of her best interpretations: the George Gershwin song as elegy for that spring (marked by the assassinations of Robert Kennedy and Martin Luther King Jr.) and as prophesy of a long, hot season to come.

Originally written for Broadway, this song is an unimpeachable example of the right rendition raising good to greater, full of danger and exhilaration. As revealed by last year’s impressive Netflix doc What Happened, Miss Simone? and this spring’s less impressive Zoe Saldana feature, Nina, the singer was a force of furious nature, a classical prodigy thwarted by racism as America was on its way to a crossroads in the 1960s. With blood in her voice and the sound in her ears of Baptist church bombings and the shot that killed Medgar Evers, Simone’s “Feeling Good” was recorded 18 months after another landmark, “Mississippi Goddam.”

As sensitively portrayed by Ethan Hawke in this year’s biopic Born to Be Blue, Baker became the embodiment of doomed junkie beauty, with his accomplishment (when he was topping Miles Davis in jazz trumpet polls) lost in legend. Along with his rendering of “My Funny Valentine,” which rivals Frank Sinatra’s as definitive, this is Baker’s signature tune, as his blithe read of Frank Loesser’s witty lyric conveys an unmoored sensibility—“Let’s defrost into a romantic mist / Let’s get crossed off everybody’s list”—that makes it clear he won’t be back from whatever lost place the song leaves him.

“Sweet and Dandy,” The Maytals

Early on in Vinyl, when record executive Bobby Cannavale has a coked-up epiphany that changes his life, this is the reggae classic that plays in the background. Recorded at the end of the ’60s, it was introduced to Americans in The Harder They Come, the soundtrack of which dominated my young summer of 1973. I can personally attest, therefore, to singer Toots Hibbert’s power to make anything sound like an epiphany or a lark.

“Tangled Up In Blue,” Bob Dylan

Early on in Roadies, when apprentice Imogen Poots has a musical epiphany that changes her life, this is the folk classic that plays in the background. Ever the rock critic that he was for Rolling Stone in the ’70s, writer-director Crowe has chosen the superior and more intimate alternate take of Dylan’s road epic, whose last-verse shift from third person to first explodes in your heart.

Going on 40, Waylon Jennings protégé Simpson is the country auteur of the moment with his new CD, A Sailor’s Guide to Earth, his sequel to Metamodern Sounds in Country Music. Simpson’s “country” music is so meta as to warrant quotation marks around the term, with this song—Vinyl ’s theme—sounding about as country as punk-Zeppelin, building from blues to thrash.

Vinyl ’s first season covered the early 1970s’ rapidly shifting musical winds, when the missing link between Bowie glam and punk avatars the Ramones was the Dolls, proving that the right combination of hooks and attitude can steamroll chops and finesse in a Manhattan minute. The Dolls are the series’ constant, reducing the Mercer Arts Center to ruins in the pilot, then watching themselves being upstaged by another band ten hours later from the finale’s sidelines. In the same audience can be seen a couple of Ramones plotting their coup.

By the time we hear the Queens-based band of brothers (who weren’t really brothers) in Roadies, Poots is backstage, chasing down a demon groupie who’s seducing her way to the heart of rock and roll. Informed rumors have circulated these past two years that Vinyl producer Martin Scorsese has been filming—in time for this year’s 40th anniversary of the Ramones’ debut—the story of rock’s most tragic group, and one of its half dozen most influential since the Beatles. All the original members are gone now, three before the age of 60, barely on speaking terms while alive and without a dying word for any of the others.

“Straight Out of Compton,” NWA

A reminder that the summer breeze wafting through your car window as you head up Pacific Coast Highway may be southbound, where a conflagration of racial frustration is a gust away. Last year the movie that shared this song’s title followed Love & Mercy, about the brilliant and troubled young Brian Wilson; in Compton, Wilson’s beaches of paradise—20 miles away—might as well have been on the moon.

Odd couple Gil Evans, a craggy, middle-aged white Canadian, and Davis, Louis Armstrong’s angry black musical descendant from the Midwest by way of Harlem (where he was savagely beaten by cops for spending too much time in the company of blonds), formed one of jazz’s monumental partnerships, the trumpeter’s lonely 3 a.m. blues drifting across the arranger’s impressionist soundscapes. From this ’57 track, with its sound of summer twilight, was born 1960’s epochal Sketches of Spain as well as this past spring’s ambitious biopic of the same name, starring and directed by Don Cheadle.

Passing the blues torch from Ma Rainey in the 1920s to Billie Holiday in the ’30s (and then Joplin after), the Empress of the Blues wasn’t a woman to be trifled with, musically or personally. While we might have chosen here one of her landmarks like “St. Louis Blues” or the Depression anthem “Nobody Knows You When You’re Down and Out,” this later one from Smith, as interpreted by a superb Queen Latifah, effectively closed out last year’s HBO movie Bessie.

Despite the best efforts of star Tom Hiddleston, the recent I Saw the Light was a missed opportunity to tell an American story that’s the stuff of myth. In seven years Williams invented both modern country music— encompassing no small element of black blues and rock and roll roots—and a template for destructive singer-songwriters of all eras and genres. This wasn’t the last song he ever sang, but it might have been: On a lost highway from Tennessee to a concert in Ohio, Williams’s driver pulled into a gas station, filled the tank of the Cadillac, and realized his illustrious passenger in the backseat was dead, not yet 30 years old. It was New Year’s Day.

“Back to Black,” Amy Winehouse

If jazz legend (and Winehouse idol) Dinah Washington had been the lead singer of the Shangri-Las, this is the cut they would have made. The 2006 recording—heard a little more than halfway through last year’s Academy Award-winning documentary, Amy—may have been the juncture of her life; up until this point Winehouse still had a fighting chance. Afterward, as she took too many cues from Hank and Chet and Janis, the inevitable couldn’t help seeming a blessed relief to which she stumbled, a zombie vocalist with no joy and a bitterness she was hardly alive enough to muster. That this is her purest singing, less afflicted by the affectations of other performances, may be coincidence. She left us mid-July 2011, in a losing race with dying summer.