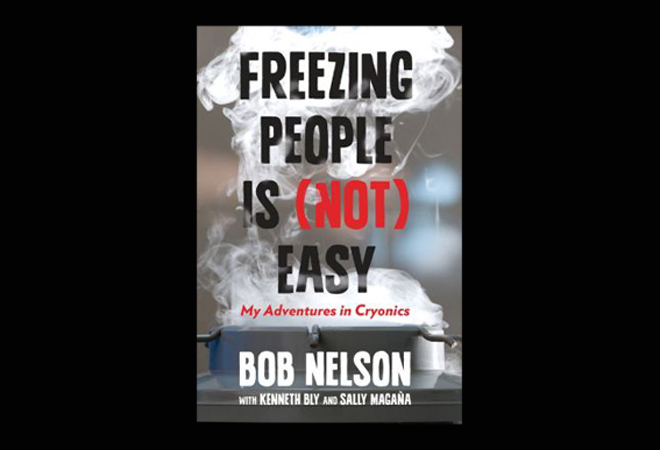 In 1962 Bob Nelson was a TV repairman enthralled by cryonics, the theory that people can be frozen immediately after their death only to be brought back to life at some later date when scientists and physicians have cured disease and/or reversed aging.

After attending a meeting with other enthusiasts, Nelson was voted president of the newly formed Cryonics Society of California. He unexpectedly found himself acting as the spokesperson for the movement. The only problem was that Nelson didn’t have a scientific background; in fact, he hadn’t graduated from high school. That didn’t stop him from freezing Dr. Robert Bedford in 1967. He even wrote a book about it, We Froze The First Man, in 1968.

But the early suspensions weren’t perfect: they involved dry ice and a Styrofoam-lined box. And the first bodies had been donated so suddenly that Nelson had to store them in a friend’s garage while he looked for a permanent storage place. His enthusiasm had blinded him to the reality of the responsibility, and he found himself struggling to keep his “frozen heroes” suspended with little help and even less money.

Years later, desperate and out of funding, he simply locked the vault and left. Families only learned that their loved ones were decomposing when the media got hold of the story. These relatives filed a lawsuit against Nelson and ended up winning a judgment of $800,000. Bob Nelson changed his name and dropped out of sight around 1978, but he has recently reemerged to tell his side of the story in Freezing People is (Not) Easy.

The stories in his memoir, which came out March 18, are heartbreaking, from the desperate parents trying to save their seven-year-old daughter who was dying of cancer to the husband who couldn’t bear to be apart from his dead wife and asked Nelson to help build a vault where he could set up a chair and spend time with her frozen body. Nelson makes it easy to sympathize with his choices, even as you’re cringing at the impending consequences.

If Nelson had found a wealthy benefactor to fund the enterprise he might have been heralded as a visionary. Instead he was pilloried by the media and shunned by fellow cryonicists.

It’s a story without an easy hero or an obvious villain, but it offers a lot of lessons. The book might be made into a movie, a comedy starring Paul Rudd as Nelson and Christopher Walken and Owen Wilson as supporting characters.

We caught up with Nelson who talked about his book, immortality, and the rumors that he froze Walt Disney.

So how did you first get involved in cryonics?
In 1966 I read an amazing book called The Prospect of Immortality by Dr. Robert Ettinger. It blew me away. I knew that if we were ever going to go to other planets, we were going to have to learn how to put people to sleep for years and wake them up. That’s what Ettinger’s book dealt with.

When I came away from reading the book, I still had to question: Is it actually possible to take a living human being and put them to sleep, slow down the metabolism to near zero, and wake them up 10 or 20 years later? At that point in time I knew of nothing that could do that, but if you ask me that today it’s the most natural order of life in the universe.

Back east in the winter all the flies and mosquitos and ladybugs and fireflies go into super cool, which is in between hibernation and suspended animation. My favorite is probably the Siberian salamander. They get frozen in Siberia in solid blocks of ice for up to 10 years and as soon as that block of ice melts, they resume looking for a loved one or something to eat, whatever they do.

Are any studies being done on what allows these animals to be frozen and come back to life?
Probably the closest realistic answer I can give you is the case of Armando Socarras Ramirez. Back in 1969 he was a young man, 17, who wanted to escape from Cuba. As a kid he would go down to the airport and watch the planes leave. He got this idea to hide out at an airport and jump up in the wheel well of a DC-8 to get out of Cuba. He didn’t care where he went, he just wanted out.

He didn’t know that they fly at 59,000 feet where the outside temperature is -40 degrees and there’s not enough oxygen or pressure to sustain life. He was there for eight hours. He fell out of the plane in Madrid, Spain and was pronounced dead, but on the way to the morgue they heard him groan. They took him to the hospital and revived him. He’s the first documented case of artificially or accidently induced human hibernation.

The next one is a young lady from Norway who was skiing in the mountains and went over a river and fell in. Her head was in the water for three hours. The cold that was killing her was also saving her; she’s alive and well. She works at the same hospital that saved her life today.

The most amazing one was two years ago in Japan. A young man partied too much and went outside in a blinding snowstorm. He was trying to sober up a bit and he slid down the side of a mountain. They couldn’t find him and he lay under a snow bank in solid snow for 24 days. And they resuscitated him.

That just deals with the issue of ‘Is it possible?’ We don’t, to this day, know how to reduce the metabolism of a human being and resuscitate them. We’re close. Dr. Mark Roth from the Cancer Institute in Washington has found a chemical, hydrogen sulphate, which he can use to take a non-hibernating animal, like a rat, and put it to sleep for hours.

The defense department has spent millions of dollars to perfect this so that if a soldier gets shot on the battlefield, where he normally has about an hour to live, he can instead be put into suspended hibernation, extending that one hour to maybe 12 or 24 hours. It saves lives. There’s just so much going on in the world today.

After the failure of the vault in Chatsworth you stepped back from cryonics for a while. What role do you play in it now?
My first act of coming back into cryonics was to talk to Professor Ettinger and see if he had any objections to my writing my book. And he wrote two chapters in there. I’ve gone to many of the cryonics conferences, and I communicate with a lot of the people who are in the program.

Why after all this time did you feel the need to write this book?
We froze the first man, the first woman, and the first child. Unfortunately, none of them had any money. I took it upon myself to try to figure out some way to save them. Which was dumb. And wrong. Today, unless you pay the full amount right to the penny—at ALCOR it’s $150,000, at C.I. it’s $28,000—nobody’s going to suspend you. It just seems so silly to me now: Why would strangers be interested in paying to keep somebody frozen?

True believers, like the Wright brothers, everyone laughed at them. Today we have 10 different principles by which man can fly, and we probably have 10 different principles for how we can put human beings to sleep for centuries. For me, my instructions are “Don’t wake me up when it first becomes possible. I want to make sure that you can rejuvenate me, make me younger, and maybe even a little better looking.”

Do you have a contract where you specify when you want to be woken up?
Yes. Those are my instructions. The worst that’s going to happen is it won’t work. But it is going to work. Dr. Bedford, the first man who was frozen, was a psychology professor at Glendale College. I only spoke with him once, but his words will never leave my heart. He said “Mr. Nelson, I want you to understand that I don’t do this thinking that I’m ever going to be resuscitated. I do it in the hopes that my children or my grandchildren will one day benefit from this wonderful science.” I don’t believe in immortality. Everything is going to die sooner or later. Even the planet, even the sun. But I want to be around as long as I can.

In your book you debunk the rumors that Walt Disney had his head frozen. But you tell the story of how someone at Disney called asking for information about cryonics, but you weren’t able to help him. Could he have been frozen by a different facility?
There was no other facility at that time. The only other group was the Cryonics Society of New York and they had nothing—no mortician, no doctor, no nothing.

What’s happening with the movie?
They’re trying to decide on who’s going to be the director. The producer assures me it will be filmed this year. I do know this: They keep paying me handsomely for the option.