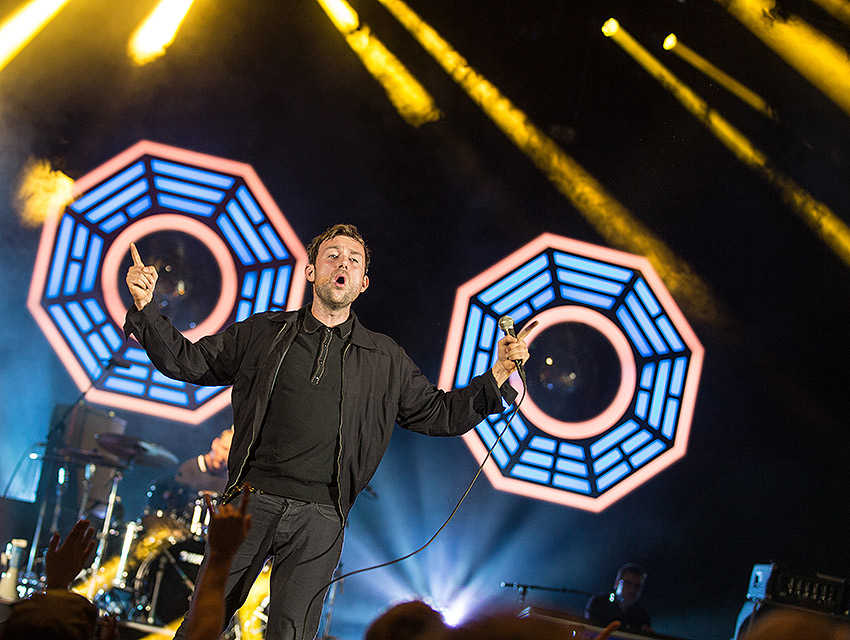 Britpop icons Blur hit the Hollywood Bowl last night in support of The Magic Whip, their first studio album in 12 years. With only two American dates on this tour—Madison Square Garden and the Bowl—it’s fitting that on their only night in L.A., the Brits brought out Fred Armisen, someone who knows a little something about being a Californian. The SNL and Portlandia star joined them for their 1994 Cockney classic “Parklife,” catering the very English spoken-word verses to L.A. sensibilities.

“I was thinking this song could be about Griffith Park, about Echo Park,” Armisen said before the song, frontman Damon Albarn nodding along. “It’s about parks,” Albarn replied.

“I remember coming to Los Angeles 25 years ago,” Albarn said of he and bandmates Graham Coxon (guitar), Alex James (bass), and Dave Rowntree (drums). “We were in a car, hungover, going to a radio interview. We were usually hungover going to a radio interview. We would always drive past the Hollywood Bowl, and well, it never happened for us. So I can’t express in words, really, how much this means to all of us.”

The last time Blur played an American venue was Coachella 2013, where they were listed as a co-headliner with the Stone Roses but easily upstaged the Manchester band. It’s a testament to their constantly evolving sound that has brought them worldwide acclaim, though they know what many people in attendance were there to hear. Over the driving percussion of perhaps their most famous song, Albarn shared a problem most bands would love to have.

And, of course, they did. And while “Song 2” may be their best known single Stateside, to cast Blur off as simply The Woo-Hoo Guys is to ignore the depth of their songcraft, easily proven in one fell swoop by “Girls & Boys,” in which bassist Alex James’ meandering, melodic bass lines are actually churning out those unmistakable hooks you can’t wring out of your head.

The same goes for tracks like “There’s No Other Way,” new track “Lonesome Street,” and the gospel-tinged “Tender,” which played well as a genuine moment apart from the band’s wry humor (not for too long, though: Albarn also treated us to a 10-second ditty asking us not to vote for Trump because “he’s such a chump”).

As they launched into “The Universal,” a powerful track to close the night, The Woo-Hoo Guys proved that maturity has not tempered their sense of adventure, and the triumph that is The Magic Whip hints that the best may still be yet to come.